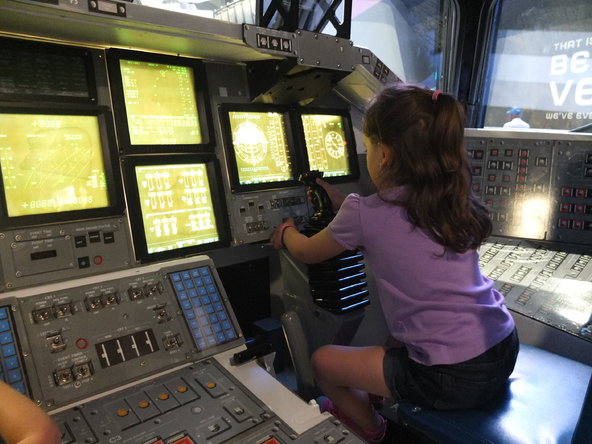 The author’s daughter pretending to run the controls of a space shuttle at NASA’s Kennedy Space Center.Credit

My 7-year-old daughter has pretend space launches in our living room. She loves Tinkerbell not because she has sparkly wings, but because she is a “tinker” fairy that can fix anything. Signing her up for summer camp should be a chance to simply let her grow and explore her interests as a budding scientist or engineer. Yet we are aware that as a Latina girl who dreams of being a NASA inventor, her path is unlikely to be smooth, and the deck remains stacked against her.

Last summer, I dropped her off at “Blast Off” camp at our local arts center, where kids created projects related to science and planets. Out of 10 children with little backpacks and beaming faces, she was the only girl. I smiled at her obvious excitement as I waved goodbye, but worried about the implications of how often the gendering of interests happens in the lives of our children. She may well be the only girl in the room for years to come.

Even as women have made uneasy but measurable strides professionally and earn more degrees over all than men, they remain under-represented in science, technology, engineering and math, known as the STEM fields, as evidenced everywhere from university classrooms to Silicon Valley board rooms. As Lorelle Espinosa notes, while women earned 57.3 percent of bachelor’s degrees in 2014, only 19 percent of bachelor’s degrees in engineering and just 18 percent of those in computer science were awarded to women. For minorities, the numbers are worse: In 2012, only 3.5 percent of STEM degrees went to Latina women (the demographic group to which my daughter belongs).

This paradox of increased gendering amid higher academic achievement in girls is visible early on in popular culture. Female characters are minimized and made less available in toy and clothing merchandising, particularly when it comes to action heroes. Toys are still often color coded and separated by aisle, with action and technology toys typically aimed at boys, and socially or emotionally oriented and role-playing toys aimed at girls, irrespective of crossover appeal. Rather than deciding for themselves the scope and use of a toy, children are being limited in their play by gender-specific designations and marketing. We’re simultaneously telling kids that gender doesn’t matter and opening doors professionally and educationally, but telling them it does matter (and in fact, more or less defines them) in the way they dress, in the toys they play with and how they engage with them, in the television programming they watch, and in the activities they pursue.

Children see far more than we give them credit for, and our culture barrages them daily with messages that say that pursuits like science or tech are for boys, and boys alone. We’ve purchased Carter’s brand science-themed pajamas available only in the boys’ section, and discovered last year that Pottery Barn Kids would not embroider a Star Wars backpack in pink (we tried to make a splash for kindergarten). Girls who do not fit today’s princess mold are often deemed tomboys, implying that their preferences are an incursion into a boy’s world, putting their budding femininity (however they wish to define it) at odds with their interests. No wonder so many girls shy away from STEM.

As parents, we choose what to support and what to purchase for our children. I often shop across departments and aisles, indifferent to what arbitrarily designated section I am browsing. While on the whole the choices for girls are narrow outside of sparkles and princesses, I am heartened by the uptick in clothing options that don’t pigeonhole children, like space T-shirts for girls introduced by Lands’ End and Hanna Andersson, or new lines of clothing meant to celebrate the broad interests of kids, like Let Clothes be Clothes and Princess Awesome.

Yet as my daughter is getting older and can read and intuit labeling, packaging and messaging, she has begun to question if it is alright to like something from the boys’ section, even if it is something as universal as science – and whether that is a threat to the particular girl identity she has crafted for herself. We know this is a long-term conversation and that it is our job to encourage our child not just to pursue her interests, but to move beyond the narrow confines of a manufactured girliness.

Womanhood in this complex world requires strength and poise, the confidence to blur the lines of what is acceptable to find one’s own path. As a woman of color with a doctorate, I know from experience that my daughter is likely to face presumptions and questions due to preconceived notions of who she is and her competence level. We must prepare her for this as well.

This summer, she is hoping to try robotics camp, or maybe a week on dinosaurs. While the make-up of her peer group at her chosen camp may not turn out to be ideal, I’m hoping she will learn from it and keep asking questions, and so will we.

Lara N. Dotson-Renta, a scholar of Spanish and French literature and cultural studies, is working on a book that traces the history of Puerto Rico through family narratives and shared experiences of womanhood.