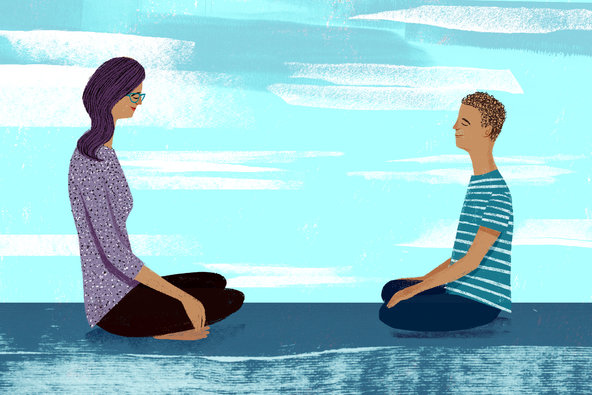 These investigations, along with a review published in March that combed the developmental psychology and cognitive neuroscience literature, illustrate how meditative practices have the potential to actually change the structure and function of the brain in ways that foster academic success.

Fundamental principles of neuroscience suggest that meditation can have its greatest impact on cognition when the brain is in its earliest stages of development.

This is because the brain develops connections in prefrontal circuits at its fastest rate in childhood. It is this extra plasticity that creates the potential for meditation to have greater impact on executive functioning in children. Although meditation may benefit adults more in terms of stress reduction or physical rejuvenation, its lasting effects on things like sustained attention and cognitive control are significant but ultimately less robust.

A clinical study published in 2011 in The Journal of Child and Family Studies demonstrates this concept superbly. The research design allowed adults and children to be compared directly since they were enrolled in the same mindfulness meditation program and assessed identically. Children between 8 and 12 who had A.D.H.D. diagnoses, along with parents, were enrolled in an eight-week mindfulness-training program. The results showed that mindfulness meditation significantly improved attention and impulse control in both groups, but the improvements were considerably more robust in the children.

Outside of the lab, many parents report on the benefits of early meditation. Heather Maura of Vienna, Va., who was trained in transcendental meditation, leads her 9-year-old daughter Daisy through various visualization techniques and focused breathing exercises three nights a week, and says her daughter has become noticeably better at self-regulating her emotions, a sign of improved cognitive control. “When Daisy is upset, she will sit herself down and concentrate on her breathing until she is refocused,” Ms. Maura said.

Amanda Simmons, a mother who runs her own meditation studio in Los Angeles, has seen similar improvements in her 11-year-old son, Jacob, who is on the autism spectrum. Jacob also has A.D.H.D. and bipolar disorder, but Ms. Simmons said many of his symptoms have diminished since he began daily meditation and mantra chants six months ago. “The meditation seems to act like a ‘hard reboot’ for his brain, almost instantly resolving mood swings or lessening anger,” Ms. Simmons said. She believes it has enabled him to take a lower dose of Risperdal, an antipsychotic drug used to treat bipolar disorder.

Whether children are on medication or not, meditation can help instill self-control and an ability to focus. Perhaps encouraging meditation and mind-body practices will come to be recognized as being as essential to smart parenting as teaching your child to work hard, eat healthfully and exercise regularly.

Learn some meditation techniques you can teach your child, read Three Ways for Children to Try Meditation at Home