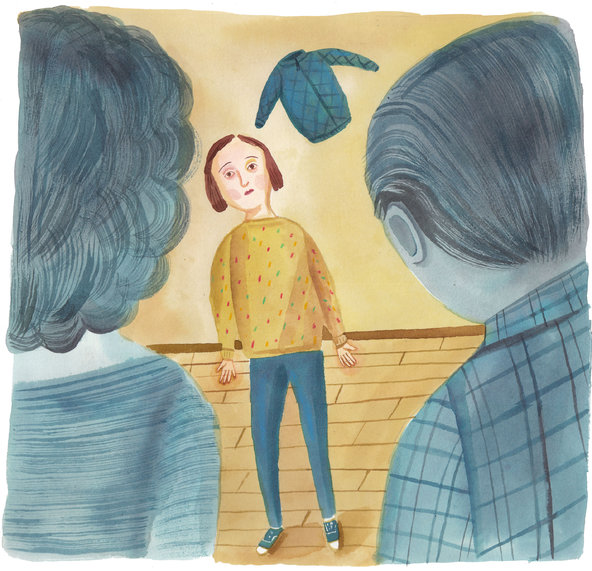 Midseason, with plenty of New England cold stretched ahead of us, our 12-year-old daughter, Birdy, lost her winter coat. This was not a tragedy. Things are only things, after all.

The Yiddish expression for this is nisht geferlach — no big deal or, more literally, “not dangerous,” which I love for the way it expresses the important distinction between matters of life and death and, well, everything else. (As my father likes to say, “There are very few geferlachs in life,” which is, I suppose, the Jewish equivalent of “Don’t sweat the small stuff.”)

Still, as Birdy explained what had happened — she had, she thought, dropped the jacket somewhere at school, but it had not turned up in the lost and found — and as it became clear, over the course of a few days, that the jacket would not be reappearing, I behaved strangely about it, at least mentally, with the emphasis here on mental, as in patient. And that’s because I am parenting.

Parent has become a verb, only it’s very rarely clear what sort of action is being propelled. Most verbs translate into decisive movement. But while I understand what it means to be a parent — the happily ontological noun — the verb form can be paralyzingly befuddling, as if you turned “wife” from a state of being to an action. Although if you said, “I’m late because I was wifing my husband,” everyone would know what you meant. (Texting him to pick up a bag of cat litter.)

Back to the coat. Birdy, a vegetarian, had researched the down industry earlier in the year and concluded that it was not her ethical cuppa. Her father and I, in love with her and her principled self, offered to replace her old feather-filled jacket with a good-quality synthetic one, which we bought on Ebay and which, despite being “gently used,” cost approximately one million dollars. Now it was gone.

I evaluated potential solutions. There are many schools of parenting thought right now, and so many of them have so much to offer.

Should Birdy enjoy the full opportunity of not being rescued by me? Should she learn from her mistakes by scouring the school, earning money to replace the jacket, wearing her old one disturbingly stuffed with dead geese? Should we get her a new jacket, a lesser jacket, a hand-me-down? Should I dig out the old baby sling and stuff her into it, singing “Baby Mine” from “Dumbo”?

The problem with parenting is that it’s a cross between diagnosing and fortunetelling, and it starts when they’re newborns. Everything’s a geferlach. Does this mucus look green and viscous? What does it mean? Does it mean the baby’s going to die? Run a meth lab? Go to M.I.T.?

And then it turns out that it doesn’t mean anything. It turns out that you like having your babies in the bed because you’re too lazy to get up in the night, or because you like to look at those silvery little moonlit eyelids. Or you don’t like having them in your bed because they’re like diapered squids suckered onto you with their squid beaks and flailing tentacles. One child is verbal early, and you have rational conversations about how best to comport oneself in the frozen-food aisle (M.I.T.!); another persists in wordlessness, and you have to carry her wailing, writhing shape out to the car, prying tiny fingers from the icy box of a Salisbury steak dinner (meth lab!).

You know how the one-size-fits-all yoga pants technically fit everyone, but for some of us, they make your butt look like it’s been sculpted from a quesadilla? Parenting is like that. Every kid requires something different; every moment does. We can love them. We can lean down to listen, tune in to who they are. We can enjoy ourselves, enjoying them. We can care for them, set limits, try to be gracious, smooth their hair behind their ears, walk them into town for froyo, hope they trust us enough to unburden themselves. Those are just some of the verbs. But we don’t have to pick a one-size-fits-all style from parenting’s extremes. We don’t have to strand them or solve all their problems.

We can look at our near-tears jacket loser and say, “Don’t worry, my love. It’s just a jacket. And hey, what do you think we should do next?”

She thinks we should get another jacket, another black one, but cheaper. “And then we should order a dog tag for the zipper, with my name and Daddy’s cell number on it. So people know it’s mine. So if I lose it I’ll get it back.” She’s not a test case, not pie-chartable. She’s just one person, with a small problem and a good solution. And spring is on the way, regardless.

Catherine Newman is the author, most recently, of the memoir “Catastrophic Happiness: Finding Joy In Childhood’s Messy Years.”