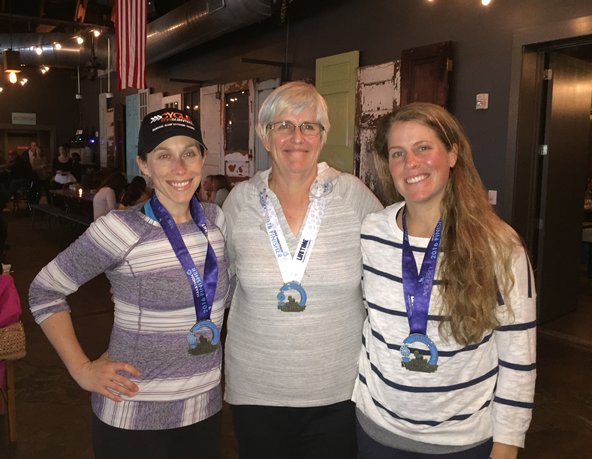 The author, Jen Miller (right) with her sister, Tracy, and mother after the New Jersey Marathon & Half Marathon on May 1.Credit

When I started running 10 years ago, my family thought it was a funny thing to do. This was in 2006, two years before a running boom took hold in the United States and put a race in my small corner of New Jersey just about every fall and spring weekend. I did my first 5K because a magazine asked me to run it and report back on what was then still a somewhat novel fitness activity. I continued to run because it helped me deal with a romantic breakup, work stress and the ups and downs of being a human being.

My mother, who wasn’t allowed to run in high school because she was a girl, came with me to some of those first races. She was there to cheer, but after a while, she got bored with watching. She also complained that she was overweight and out of shape.

“I saw you running and everybody else running, and I thought, I can do that too,” she told me. I took her to buy her first pair of running shoes. She ran her first 5K at age 58, and for her second, I walked/ran beside her, my foot in an air cast, during her town’s Fourth of July race.

It wasn’t long after that my brother and sister-in-law started to run, completing half marathons. My sister and her husband joined the family bandwagon, finishing a 5K, then a half-marathon, then a full marathon. My dad, who is divorced from my mom but remains on friendly terms, kept track of all of our Facebook posts about running and listened in on our conversations about running. This past December, I took him to buy his first pair of running shoes, too.

My thing had become their thing. At family parties and holidays and even a recent extended family vacation to Walt Disney World, running shoes and fuel and race schedules entered the rotation of safe discussion topics, along with the Philadelphia Phillies, Eagles and the Jersey Shore.

So when I decided to run the 2016 New Jersey Marathon, on May 1, I was happy when my sister told me she’d be joining me, and my mom said she’d run the half that would be held on the same course on the same day. I thought it would be a fun family activity, especially the week before Mother’s Day.

As the starting time grew nearer, our car barely inched ahead. After my sister’s snap, no one talked. My brain was stuck on the foot injury I’d sustained three weeks before, wondering if I’d finish the race. My mother sat quietly beside me, knowing better than to step in.

And that’s when I asked myself: Why didn’t I just run my marathon alone?

By the time my dad inched the car to within a half-mile of the starting line, I asked him to pull over, and my sister, mom and I shuffled out into a light drizzle. I didn’t want to talk to anyone, not to my mom about my nerves or the ache in my foot, or to my sister about her lost headphones. Nothing. No one. I wanted to be left alone with my dread.

But when the race started, that feeling receded with every mile crossed. My foot didn’t hurt so much anymore. The downpour they’d been forecasting never came.

My corral started ahead of my sister’s, but I knew she’d beat me because of my interrupted training. I was grateful around mile six when she checked in on me and asked how my foot was doing as she passed by.

Seeing my usually mellow dad jumping up and down and screaming at mile 9.5, while my brother yelled at me that I was losing the race and to run faster, gave me a jolt of energy. That’s when I knew I’d run the full thing instead of bailing at the half-marathon mark.

My boyfriend greeted me with a cowbell at mile 18, another boost that helped me press on.

At mile 19, runners turn around to head to the finish line, and when I saw my sister running south as I still ran north, I screamed at her that she’d better keep up that pace and beat me.

When I came through the final yards of the marathon to break my previous personal record — one that I’d set on that course in 2013 — my dad was there and ready with his camera. My mom had finished her own half-marathon and was waiting for me just beyond the finish line, a medal draped around her neck.

No one had come to my first two marathons. Before my third, my dad told me that if I died, he’d be the one to bury me, and all had been pretty solitary affairs. So for this marathon, my sixth, I felt honored to have my mom and sister on the course with me, and my dad and brother and his wife and my boyfriend there cheering me on. And though I’ll be taking a break from marathons while I recover, I can’t wait to cheer them on at their next running events.