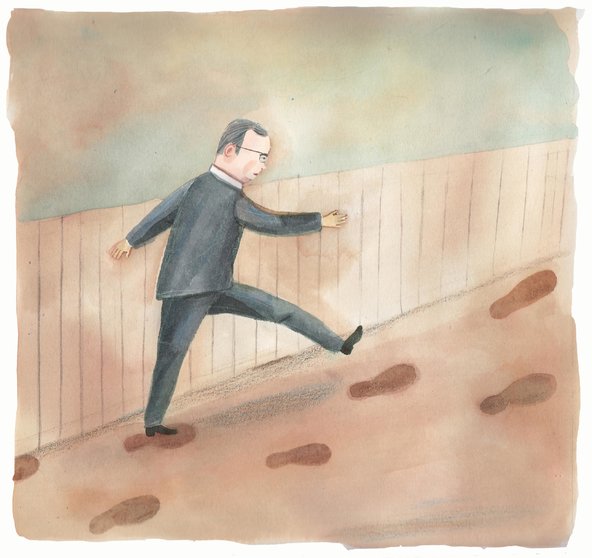 My father is one of three brothers who thrived in their respective professions, lifting themselves above the economic station of their Italian-immigrant parents. They’re archetypal American success stories. Buoyed by their good fortune, my siblings, my cousins and I racked up athletic trophies, won scholarships, gained admission to competitive schools, built enviable careers.

So when the generations of Brunis reunite for mountains of pasta and a marathon of conversation, the talk is often like the text of one of those what-a-year-we-had holiday letters. Someone just bought and renovated a dream home. Someone else just directed a hit Broadway musical. Someone made partner. Someone finished the course work for a doctoral degree.

The goal is to catch everyone up; the impulse isn’t boastful. But I’ve risen from the table and walked away from these occasions feeling pressured, almost panicked: How can I be sure that I won’t disappoint anyone in this crowd? What if I arrive for the next feast without shiny medals in tow?

The glory of a close family is that you never lack for cheerleaders, enveloping you in support. The flip side is that you never lack for judges, weighing you down with expectations. I’ve seen this not just in my own life but in politicians I’ve covered and public figures I’ve admired. Like many clubs, a family has dues, and you have to figure out how to keep them from rising too high.

Every year my siblings, their spouses, their children, my life partner and I carve out an uninterrupted week to pack into a beach house somewhere. We prioritize it. We relish it: the card games, the group runs, the cocktail hour. Especially the cocktail hour.

But almost always, there’s an awkward instance when a nephew’s or a niece’s disappointing report card, abandoned sport or episode of bad behavior pops up in discussion — incidentally, accidentally. Frequently he or she sulks off, weepy and mortified. Because we’re the people he or she cares the most about, we’re the witnesses he or she can’t shake off. We’re the opinions that can’t be ignored. That’s not our goal. But it’s a byproduct that’s maddeningly hard to avoid.

I’m more and more conscious of this. Recently, at the prodding of one of my siblings, I had a conversation with one of my nieces about working harder in school. I kept it short, studying her body language to determine the precise moment to end the admonishments. Then I switched quickly to a lighter topic, so that something other than a sense of recrimination might linger. I was careful to say, “I love you,” but I was just as careful to say it in a somewhat casual manner, not a pregnant, theatrical, shaming one.

Is that the way through this prickly briar patch?

The delicate ecosystem and difficult byways of family were much on my mind on the campaign trail over recent weeks, as I watched the Bushes gather around Jeb.

His stooped, 90-year-old mother, Barbara, trudged alongside him in frigid New Hampshire, making a last-ditch effort to reanimate his presidential bid. His older brother, George W., traveled from Texas to South Carolina for a special rally, where they did an offstage chest bump — perhaps a holdover from their roughhousing as kids — and then hugged.

I took in all of this and thought: What a lucky man Jeb Bush is. Surrounded by so much loyalty. Cushioned by such love.

Days later, he tearfully ended a campaign that he’d never seemed entirely sure of. This time I thought: What a burdened man. Measured against daunting examples. Compelled to keep pace. His quest for the White House was a kind of parable of the blessing and the curse of a tightly knit family deeply invested in each member’s advancement.

Of course few broods fly at the Bushes’ altitude, with its privileges. But many know its tensions. And many know one of its obvious binds: How do you glue a family together strongly enough that it’s a dependably nurturing force without having it become an oppressive one? Have the Obamas figured that one out? Their daughters are clearly cherished, but they must also be daunted. Getting the balance of that right is a family’s toughest, trickiest work.

On the athletic front, did the Mannings succeed? I bring them up because of all that chatter after the Super Bowl about Eli Manning’s mien as he watched his older brother, Peyton, add another championship to his legendary career. Caught on TV, Eli had a blank — even downbeat — expression on his face.

The brothers now have two Super Bowl rings apiece. But Eli’s recent season with the New York Giants was a bust. Peyton’s with the Denver Broncos was triumphant. Peyton has always been the larger figure, casting a long shadow, and their father, Archie, was himself a distinguished pro quarterback.

Does Manning-hood entail as much obligation and torment as pride? That was no doubt the question on many viewers’ minds when they observed Eli during that game. And it probably struck close to home. They’d wondered the same thing about their own families.

I actually started writing about the Bushes all the way back in 1999, when I was assigned to cover George W.’s presidential campaign. I followed him almost daily for the next two years.

It was clear that family, more than anything else, had given him the confidence to pursue the highest office in the land. It was equally clear that family had made him feel compelled to do that — as proof that he was worthy, as evidence that he belonged. It informed all the decisions he made. It warped them, too, so that you couldn’t be sure what was genuinely felt, what was pantomimed, what was a reaction, what was an overreaction.

I learned then about a pair of gold cuff links — a family heirloom — that the first President Bush passed down to George W. on the day of his inauguration as the governor of Texas, explaining in a heartfelt letter: “Now, it is your turn.” I believe those words and that jewelry were presented as comfort, not summons. How they were received is a different matter altogether.

Frank Bruni is an Op-Ed columnist for The New York Times and the author of “Where You Go Is Not Who You’ll Be: An Antidote to the College Admissions Mania,” which was just published in paperback. (www.frankbrunibooks.com)