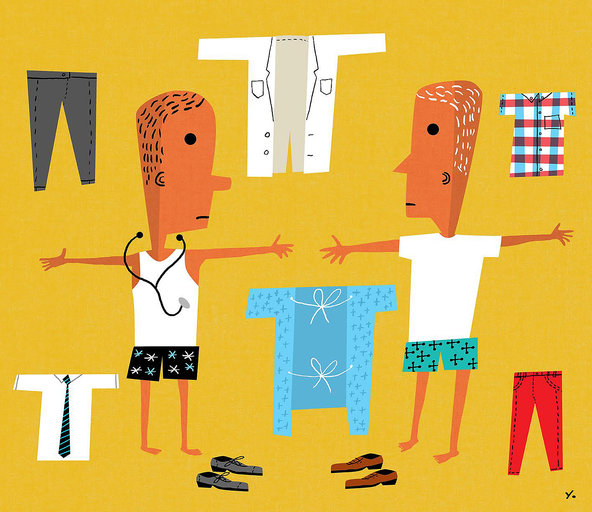 Is it time for new costumes in the long-running improv act featuring doctor and patient? The white coat and the cotton gown are tattered, under continual assault for their practical deficiencies and outmoded symbolism.

Along with ties and long sleeves, Britain banned white coats for most doctors almost 10 years ago. Our priestly garb turns out to harbor quantities of bacteria, including the hospital-associated germs we try to keep away from patients.

Presumably all garments carry bacteria, including the vestments of priests. The clergy, though, probably tote a less noxious load — and probably change robes more often. Doctors report that they do so only every couple of weeks, long enough for grime to accumulate.

Most American medical schools now bestow a fresh white coat on every new student, a symbol of our exalted professional aspirations. Some American hospitals now discourage those selfsame coats in the name of hygiene. Draw what moral you will. Many pediatricians would no more dress in a white coat than in a gorilla suit, lest they scare the little ones. Some adult doctors, reasoning that we are all children in illness, feel likewise. Some of us just need the pockets.

The best clinician I ever knew was draped in a grayish shabby thing spilling over with scraps of paper, vaguely redolent of his usual weekday lunch of pea soup. Whether you were a patient or a trainee, you didn’t really want him near you, until you quickly figured out that you really did.

One of the worst specimens of doctor I’ve run into wore snowy white, changed daily. You really didn’t want that guy near you, period, as many of his patients ultimately realized, including the ones who took him to court.

The symbolism surrounding patient gowns is just as fraught. They are cheap, demeaning, undignified and chilly. One way to cope is to wear two of them, one opening to the front and one to the rear. Thus encased, the patient is snug and warm, and also extremely well defended from inquisitive fingers and probing stethoscopes. It turns out that actual clothes are far easier to push aside for an examination than are two johnnie gowns firmly knotted together.

But patient gowns are out of style in some places mostly because they clash with the dominant medical fashion these days: doing everything at top speed. People need time and privacy to dress and undress. Medical settings without time or extra space find their stacks of clean gowns going undisturbed.

Instead, patients disrobe incompletely, or sometimes not at all, just opening little portals in their clothing through which what passes for a physical examination can be performed. Such accommodation is regrettable, but necessary to maintain our cruising speed. Call it laparoscopy for the nonsurgeon.

For my professors, the physical exam was a sacred ritual. I sometimes wonder which would distress them more: the thought of treating a rash glimpsed only on a cellphone screen, or the idea of asking a patient to open two shirt buttons under his tie for a quick inspection of that thing on his chest. I’ve been guilty of both.

A couple of months ago, on a frigid winter day, a stolid, silent patient came in because her knee hurt. “Just give me something,” she said. I was sorely tempted, but I couldn’t do it: I had to examine both unclad legs. She cast me a look of pure disgust and hauled herself to her feet.

It took almost 10 minutes for her to peel off the layers of tight, ill-fitting jeans, socks, pantyhose, more socks, more hose, long underwear, down to the arthritic knee. It took another 10 minutes to put it all back on.

My professors would have stepped out to give her some privacy. For some reason, I stayed where I was.

Those 20 minutes were death to the day’s schedule, but invaluable for showing the harried doctor something of the grim labor of everyday life for this patient, a heart-rending discomfort of binding elastic and straining seams she could never have articulated, and, of course, one that would have been invisible with her on display in a hospital gown.

It was the process that educated, not the final tableau.

We are never more human than when we are dressing and undressing, and yet for our medical care, we have, for some reason, decided to posture in front of one another fully costumed, pretending that, encased in our separate roles, we will get to the bottom of the pain.

Perhaps we need not new costumes but new stage directions. Perhaps doctors should routinely watch patients undress and then dress again. Perhaps, for that matter, patients should watch doctors washing their chapped hands yet again and putting on their white coats, checking the pockets for tools, phone numbers, reminders, lists of urgencies, looking at those coffee stains and wincing, vowing to get to the laundry and then forgetting.