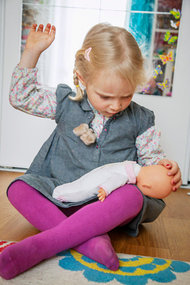 In the 1990s, in my first month in practice as a pediatrician, I asked the mother of a 4-year-old about discipline and she told me that her son was often out of line and wild, and spanking was the only thing that worked, though she was sure I was going to tell her not to, just as her previous pediatrician had done. Around the same time, my colleague in the same clinic walked into an exam room to find a cranky toddler who was acting out, and a frustrated father who was taking off his belt and threatening punishment. In each case, and in many others, we had to decide how to talk to the parents, and whether to bring up the issue of child abuse — which is definitely an issue when a child is being struck, or threatened, with a belt.

Corporal punishment, also known as “physical discipline,” has become illegal in recent decades in many countries, starting with Sweden in 1979. The United States is not one of those countries, and pediatricians regularly find ourselves talking with parents about why hitting children is a bad idea. The American Academy of Pediatrics officially recommends against physical discipline, saying that evidence shows it is ineffective and puts children at risk for abuse; pediatricians are mandated reporters, responsible for notifying the authorities if we think there is a possibility of abuse, though the boundaries are not clearly defined by law.

But many parents continue to spank, even when they don’t think it does much good. In a recent report by the nonprofit organization Zero to Three of a national sample of 2,200 parents of children birth to age 5, parents were asked which discipline strategies they used a few times a week or more. Twenty-six percent said they “pop or swat” their child, 21 percent spank, and 17 percent reported hitting with an object like a belt or a wooden spoon. (Parents could respond that they used more than one strategy.) Zero to Three reported that even those who used these strategies frequently did not rate them as effective, and 30 percent agreed with the statement, “I spank even though I don’t feel O.K. about it.”

Michael MacKenzie, an associate professor of social work and pediatrics at Rutgers, called the association “bidirectional and transactional.” How you discipline your child shapes your child, but also shapes you as a parent. But if you control for the child’s behavior, comparing more aggressive young children with other children who behave in the same ways, those who are frequently hit or spanked are more likely to show aggressive behavior and rule-breaking later on.

In a study published last year, he and his colleagues looked at these bidirectional effects. Children who were spanked were more likely to show disruptive, aggressive behaviors later on. Those behaviors, in turn, made it more likely that those children would be spanked more in the future.

“It mattered for everybody, but it mattered more for these kids in riskier contexts, the families facing more stress,” Dr. MacKenzie said. Other research showed that spanking was associated with poorer cognitive outcomes for children, even when the researchers controlled for factors such as maternal intelligence, maternal depression and cognitive stimulation in the home.

Dr. MacKenzie suggested that some families get caught in a “feedback loop,” in which children who are spanked respond more aggressively, and become even more challenging, reinforcing parents’ sense that only harsh discipline will work, so parents find themselves escalating the discipline, which in turn evokes more intense behavior.

“We want to think about these cycles and how they amplify,” he said, and to think as well about how to support families early on so that they set up different patterns. “We’ve sort of suggested the removal of a tool that many parents use, most parents use, without discussion of what the alternatives might be.”

Michael Lorber, a research scientist in the Family Translational Research Group at New York University, has found that parents who interpret their children’s behavior more negatively than an objective observer tend to use more harsh discipline. These patterns begin younger than we think, he told me, with parents in their studies clearly identifying children as young as 8 months old as difficult and aggressive.

“We think the infancy period is probably the time when parents begin to develop their disciplinary practices,” Dr. Lorber said. “Call it difficult temperament or incipient externalizing behaviors or contentiousness, it’s definitely the case that infants’ behaviors influence their parents, including physical discipline.”

Leslie Leve, a professor of counseling psychology and human services at the University of Oregon College of Education, said that it was possible there were genetic predispositions toward aggressive behavior, which might affect both parents and children. “There is a common misperception that when people think of a behavior as ‘genetic’ that it’s not changeable, and that is not true,” Dr. Leve said. “With A.D.H.D. or aggression we know there is a genetic component, but there is a lot we can do in a family or educational environment. Genetics does not mean immutable.”

Dr. Leve has participated in studies of adopted infants, which can help tease out these effects, but which also show how complex the interactions are, with harsh parental responses affected by the child’s characteristics but also by factors in their own temperaments and their marriage.

Zero to Three reported that 69 percent of the parents said that “if they knew more positive parenting strategies they would use them.” Pediatricians try to help parents develop such strategies, discussing what behavior is developmentally realistic for young children; helping them interpret behavior without regarding it as defiant; counseling them about setting limits; and helping them find positive behaviors to praise and enjoy.

Disciplinary choices reflect parental stress, family circumstances and the whole complex cocktail of emotion and personal history and daily life at home. What parents do affects their children — their brains and their behavior — and the ways that children behave affects their parents. And the cycle of spanking and aggressive behavior seems to leave everyone worse off.