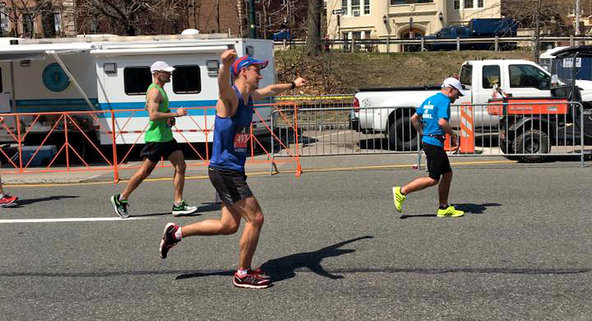 Brian Eastwood during the Boston Marathon in 2016.Credit Zeth Weissman

Brian Eastwood was a pretty good runner, but he’d always come up a bit short in trying to reach his goal of qualifying for the Boston Marathon.

When he set out to train for the 2015 Vermont City Marathon, though, his 12th try at qualifying, he had something new in his life: a divorce.

“The day my wife and I went to court was the first day of 16 weeks of training,” said Mr. Eastwood, 35, of Somerville, Mass. His life was, to put it mildly, in flux. Not only was he on the verge of divorce, but he was in the middle of trying to make a career shift, too.

But his training paid off: Mr. Eastwood ran the race of his life in Vermont, finishing in 3 hours, 1 minute, 17 seconds, more than seven minutes under his best time, and more than eight minutes under the Boston Marathon qualifying standard for men his age.

His divorce, he says, most likely made the difference. During that difficult time, “running was my only real constant,” he said.

For some people, a life trauma like a breakup or divorce might mean curling up in bed and shutting down. But others find more active ways to cope.

Those people “are better at compartmentalizing or utilizing some of the energy that surrounds the emotions they’re experiencing — maybe it’s anger, maybe it’s sadness — and channeling that into another venue or arena,” said Trent Petrie, director of the University of North Texas Center for Sport Psychology. For runners, that could mean challenging themselves to run better and faster, or to shoot for a longer distance.

“Chronic or traumatic stress leads to structural and functional alterations in the traumatized brain,” said Ken Yeager, director of the stress, trauma and resilience program at the Ohio State University Wexner Medical Center. And while a breakup or divorce may feel like a single traumatic event, it is often the culmination of months or even years of “mini-traumas” and ongoing stress.

“You had those tensions building up in your body,” Dr. Yeager said. “Most people don’t realize the way you release those tensions is movement.” He compares the situation to the nervous tension that builds up at the start of a race. “Before any major race, you have this release of tension, and that movement is what releases the trauma and tension,” he said.

Maya Harmon, 32, ran seven half-marathons in 2015 — the year that she and her husband of seven years divorced. She’d picked up running in 2009 when she moved to Phoenix, but started doing it more when the marriage started to unravel in 2011.

“When things really started to go bad, I started to focus on trying to do something to stay active because I knew that as long as I stayed active, it would keep me slightly happy,” she said. Even though her time was limited between work, graduate school and becoming a single mother, she still got out there, trained and ran races.

Her mother asked if she was trying to run away from her problems. Maybe, she said, though the escape that running provided was at least a healthy one, and kept her from feeling overwhelmed.

“If I had time to sit and think about it, I probably wouldn’t have made it through that time,” Ms. Harmon said. “Running gave me something to focus on that was positive.”

Dr. Petrie says that while there’s a risk that running might be used as an escape that prevents people from confronting the issues that are causing their stress, it can also be a useful tool for processing painful events. “Sometimes in the moment, these escapes into running or exercising or finding a slightly different focus is a way for us to garner the psychological resources we need to circle back and face the other stuff in a more productive way,” he said.

For Ms. Harmon, who had been casually involved with the Black Girls RUN! group via Facebook before her divorce, running gave her a chance to expand her social horizons. She dove in to the local activities of that national group’s Phoenix chapter and is now their running ambassador, a journey that may have helped to strengthen her psychological resilience.

When people are “depressed or stressed out, they tend to isolate themselves, and that facilitates negative moods,” said Jasper Smits, a professor of psychology at the University of Texas at Austin and a co-author of “Exercise for Mood and Anxiety: Proven Strategies for Overcoming Depression and Enhancing Well-Being.” Studies he and his colleagues have conducted suggest that exercise may help to lessen anxiety and panic attacks and provide other benefits for mental health.

This past April, Mr. Eastwood ran that Boston Marathon for which he had worked so hard to qualify. Now his life is very different: He has a new girlfriend, a new job. He was recovering from a calf injury when he started training this time, so he set a more moderate goal. He finished in 3 hours, 24 minutes, 37 seconds, more than 20 minutes slower than his post-divorce performance, but he has no complaints.

“Everyone who saw me along the course said I looked happy and strong, which is exactly what I wanted,” he said.