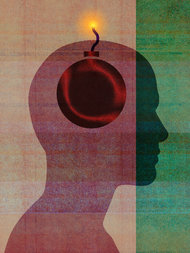 While dealing with lung cancer, my friend Nancy K. Miller seethed in her blog at pharmaceutical advertisements and hospital commercials that bombard us daily with pictures of joyous cancer patients supported by doting intimates. These jubilant characters have nothing to do with the frustrated people we know who periodically erupt in righteous indignation. I often must remind myself that anger needs to be understood as the flip side of the roiling fear that cancer instills in patients and also in caregivers.

Over the past few years, every member of my support group has bristled over well-intentioned but hurtful relatives.

Carrol enjoyed her Joan of Arc post-chemo look until her 82-year-old mother asked, “Why aren’t you wearing your wig to cover up?”

Carrol’s loyal husband, cross at her decision to retire, refused to discuss end-of-life planning. He wanted her to keep on fighting, whereas she wanted to cope with the recurrence that she expected and that did, to his great sorrow, soon end her life.

Our group ponders the marital feuds of a woman weakened by late-stage disease. Her traveling husband insists on a hired helper in the house, but she does not want her privacy invaded. With less equanimity, we hear Dana recount the desolation of an acquaintance whose partner deemed her reconstructed breasts “repulsive.”

It is hard not to smolder over people exploiting cancer as an opportunity to disappear. Many patients feel bereft of friends who find cancer socially awkward. Not knowing the “right thing to say or do,” they invent reasons to withdraw. Several books, like Letty Cottin Pogrebin’s “How to Be a Friend to a Friend Who’s Sick,” instruct the disappeared on what they might say or do. But why are such manuals necessary, since saying something like “I’m sorry, how can I help?” or “if you want to talk, I want to listen” is all that is needed?

Paradoxically, those who do the abandoning may dread abandonment. I have a friend who at the beginning of my illness — during surgery and chemotherapy — was exceptionally helpful. Yet while I went through a bad patch, all communication ceased. In my diary, I fumed at her selfishness. Only months later, after my condition stabilized, did she resurface to confess how shaken she had been at the thought of the chasm my death would leave in her life. But later, during another stressful period, she disappeared again. Chronic disease takes a toll.

Of course the rancor circulating among intimates can escalate if and when patients become infuriated by slipshod treatments: incensed at interminable waiting, indeterminate tests, bollixed scans, incomprehensible or aloof physicians, demeaning and debilitating protocols.

The actor Evan Handler and the psychologist Dan Shapiro have both written memoirs about careless or callous care that sparked their ire. Mr. Handler, dealing with leukemia, and Dr. Shapiro, with Hodgkin’s disease, fantasize about retaliating against incompetent or unfeeling medical professionals.

In a host of breast cancer memoirs, patients with a genetic mutation known as BRCA1 or 2 describe themselves as time bombs. Expressing anger not at doctors but at disease, the metaphor captures their anticipation of an imminent recurrence, but also their short fuse of alarm. They have been set to explode and it’s only a matter of ticking seconds before they do.

At some level, most of these patients probably know that their anger is a deflection of their misery at the indignities and suffering inflicted by cancer or its treatments. But they need to shoot off their mouths — as I do occasionally to my husband. When I erupt, the casualties may be innocent bystanders. I fulminate about a brilliant (healthy) colleague who repeatedly assures me that we are all terminal. Yeah, I think, but not exactly in the same way.

Such major and minor skirmishes are a reflex of the insidious dread generated by cancer in patients and in those with whom we interact. We must deal with panic about loss of control, fear of mutilation and pain, grief over disability and mortality. For cancer immerses us in frightful not-knowing: unknowingness of our changing bodies, of the causes of cancer, of when there is a recurrence, of other people about the nature of our disease, of how to estimate our odds or the length of our future, of how to make difficult medical and economic and familial decisions, of whether or where the cancer is spreading, of dying and death.

Historically, the appearance of cancer was (wrongly) attributed to the repressed anger of patients. In fact, contagious rage is not the cause but may be an effect of diagnosis and treatment.

Although there are people who manage to attain serenity through mettle or grace, jolly commercials and upbeat advertisements only make matters worse. On the other hand, sometimes it feels good getting mad at them.

Susan Gubar is the author of the new book “Reading and Writing Cancer: How Words Heal.”