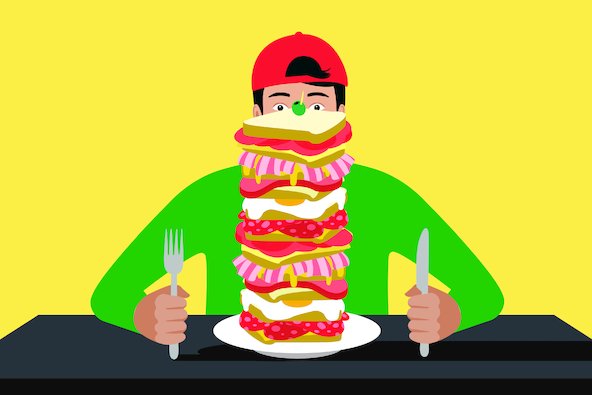 Ah, the adolescent male appetite. Those always hungry growing boys who eat standing up, drain the quart containers of milk or juice, and are fully capable of finishing off as an after-school snack the whole lasagna or pot of stew or cold roast beef that was supposed to serve as dinner for the family. I have come home to this myself: the teenager who greets his parents in the evening with an empty refrigerator, a sink full of dirty dishes, and the hopeful question, “What’s for dinner?”

In January, when the recently revised Dietary Guidelines for Americans came out, adolescent boys were specifically mentioned in a slightly unexpected context: “Some individuals, especially teen boys and adult men, also need to reduce overall intake of protein foods by decreasing intakes of meats, poultry and eggs, and increasing amounts of vegetables or other underconsumed food groups.”

Are teenage boys eating too much protein? What do we actually know about the dietary habits of adolescent males, beyond the sitcom jokes?

Dr. Elsie Taveras, the chief of general pediatrics at Massachusetts General Hospital for Children, is an expert on childhood obesity. “The forces that are working against good diet quality in adolescent boys,” she told me, begin with that famous appetite. “They’re always hungry, and that hunger, and a lack of satiety with small portions, leads to impulsive eating and eating large portions. And the foods they are choosing aren’t really keeping them full, since foods with high fiber levels are the kinds of foods which do keep people full.”

The dietary guidelines include graphs of what people in different age groups eat, drawing on data from the large National Health and Nutrition Examination Survey and showing, for each food group and at each age, how those amounts compare with the recommended daily intake. No one will be surprised to hear that when it comes to vegetables, both males and females of all ages eat significantly less than what is recommended.

For protein, the graphs look very different. For males, intake rises steadily from the 9- to 13-year-old category up through 31- to 50-year-olds, so that by the time they reach late adolescence and young adulthood, males report eating significantly more protein than recommended. Females, on the other hand, report eating quantities at the bottom of the daily standards, and 14- to 18-year-old girls say they’re eating less protein than recommended.

“There’s so little research focused just on boys,” said Alison Field, an obesity and eating disorders expert who is the chairwoman of epidemiology at the Brown University School of Public Health. “We know that at puberty, boys will acquire more muscle mass, and females will end up with more fat mass,” she said. “When males go through their growth spurt, which is longer than females’, their appetite is tremendous.”

These hungry fellows have big appetites, and as a group, they don’t tend to fill up on salad. So the primary dietary advice for them is probably “eat more vegetables,” and the hope is that would mean less meat. “What this recommendation really says is that teen boys should be eating more of their calories from vegetables but less from meat to better balance their nutrient intake,” Marion Nestle, a professor of nutrition, food studies and public health at New York University wrote in an email.

We know as much as we do about the dietary habits of teenage girls because there has been so much concern about obesity and also eating disorders. Many, if not most, adolescent girls are trying to lose weight whether they need to or not. Eating disorders are less common in males, but adolescent boys, on the other hand, are often preoccupied with building muscle, particularly if they are athletes in a sport like football, where size matters. “Males may want to bulk up, may want to be big,” Dr. Field said.

“We really underestimate how important weight and shape are to males,” she told me, suggesting that airbrushed images of models and sports figures in the media promise quick results. “Young men are just as influenced as young women by these images.”

The extra protein in the supplements that many boys buy in hope of bulking up may be useless. “The body can only absorb so much protein,” said Jerel Calzo, a developmental psychologist who studies eating disorders in adolescent males and is an assistant professor of pediatrics at Harvard Medical School. Boys who are eager to build muscle may exceed the recommended amounts, he said. “If you’re doubling up, you’re only getting the extra calories — sugars and fats.” Further, he said, the supplements are under-regulated, and the marketing is often deceptive.

In the worst-case scenario, these protein supplements can damage your kidneys, especially if you get dehydrated, so boys who dabble in protein supplements have even more reason to keep drinking fluids. But again, that can lead to problems, since sports drinks, also heavily marketed to young men with athletic ambitions, include additional refined sugars and empty calories. “We do a lot to push the fact that children don’t need sports drinks,” Dr. Taveras said. “Water is just fine.”

Although some teenage boys are clearly preoccupied with their bodies, others manage to eat their way right through adolescence without ever making very clear connections between any aspects of diet and health.

The unbounded adolescent male appetite, the athletic ambitions and the concomitant desire to add muscle, taken together with the very deliberate drumbeat of marketing, can add up to a poor diet. “To me, protein is a nonissue,” Professor Nestle said. “You can’t talk about protein in isolation from everything else people eat.”

The most essential message for adolescent boys and young men is a variant of the basic unsurprising message in the overall report: Eat more vegetables, and substitute healthier, less processed foods for the junk. Oh, and while you’re at it, guys, be careful of the protein powders. By and large, extra protein is not what you need.