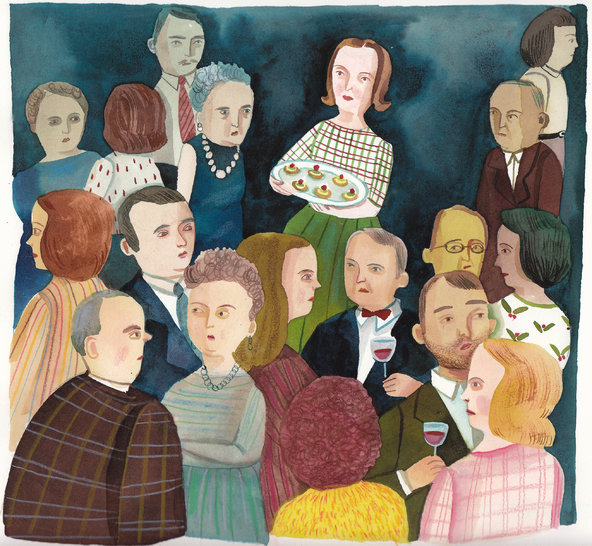 For years my husband and I threw a Christmas Eve party that was completely out of control: Friends brought their friends, and those friends brought their entire families. I never knew who was coming or how many of them there would be. Every year the house was packed with people I’d never seen before. I found them sitting on the couch in my study with the door closed. I found them in the basement. Finally I changed the rules: Only family was invited.

I have a very loose definition of family, and anyone who could fit beneath that wide umbrella was welcome, including, but in no way limited to, my mother’s third husband’s first wife, their grown children, and the spouses and children of those grown children. My stepsister’s husband’s parents came. My husband’s first wife came with her second husband, and her second husband brought his first wife and their son as well as his mother. Did you follow that? No, probably not.

Because my parents divorced when I was very young and my father was never friendly about being in the same room with my mother, I thought I was creating the holiday equivalent of Switzerland. There would be no warring factions at my party. Neutrality reigned. You could see your mother and your father and your stepparents and grandparents and step-grandparents in the same room and wish them a Merry Christmas instead of driving all over town like a crazy person trying to fit everyone in.

Of course, this was easy for me because I lived in Nashville and my father and stepmother lived in California, and the person I thought of as my stepfather, who was my mother’s second husband, lived in Texas, and his four children, two of whom I am still very close to, lived far away, which is to say the real complexity in my own family was someplace else on Christmas Eve.

I explained that I had this party in large part for him, because two of his sons lived out of town and there were many grandchildren (whose origins are too complicated to be listed here), and wasn’t it nice they could all get together not only with him but their mother and other siblings?

When I reported this conversation to my husband later that evening, he got a steely look in his eyes. “I hate that party,” he said. “I’ve always hated that party.”

And so that party was dismantled. It didn’t take much. It turned out our holiday bash was almost universally despised and the people who attended did so mainly because they thought it was The Right Thing To Do. I was left to ask myself what exactly I had been trying to prove all those years – that we were the most evolved and open-minded family in Middle Tennessee? That in my attempts to negate the strain I had felt in my own childhood, I had served up a miserable Christmas Eve for everyone?

I’m sorry about that. The modern family is a dark and twisted river. All I can say is that I was trying to navigate as best I knew how.

For much of my life I met every relationship that came as a result of marriage with a vast open-heartedness. I introduced my stepsisters as my sisters, stepparents as parents. I accepted the cousins and aunts and uncles of all newly acquired family, as later I would accept their spouses and children and partners.

But I didn’t meet my mother’s third husband and his three children until I was in my mid-20s. We never slept in the same house, shared a bath towel, or lent one another money, so while we all got along, it was a very different relationship from the one I had with my sister, or with my first batch of stepsiblings who had become part of my life when we were all very young.

I met my future husband’s children when they were in their teens, and didn’t marry their father until those children were in their late 20s. They had their own wonderful and loving mother, their own wonderful and loving father, and were in need of no auxiliary parenting, which made me what exactly? Family? I couldn’t help but judge myself against the standard of my own spectacular stepmother whom I had known since I was 6. In light of all she had done, I came up short.

By continuing to throw the Christmas Eve party, I was interacting with this endlessly extended family as if I were still a child, brightly rolling up my sleeves and getting along. When you’re a kid someone else deals you a hand and you have to play it. As adults we’re free to fold.

There’s a restaurant in a fancy hotel in town where I like to go for dinner. One of the waiters there is the son of the first marriage of a woman who married a stepbrother of mine before I met any of them. But the stepbrother came to me from my mother’s third marriage, which is to say my second set of stepsiblings, so even though I’ve known my stepbrother’s stepson most of his life, I’ve really only seen him at family holidays. He always came to the Christmas Eve party.

And I like him, not as a far-flung family-ish person but as himself – a nice guy. That’s what it all boils down to over time. Obligation and shared history can get us only so far. After a while you keep up with the people you like and the rest fall away. I always introduce him to whomever I’m having dinner with, and I tell them, even though I have no idea if it’s actually true, “We’re related.”

Ann Patchett is the author, most recently, of the essay collection “This Is the Story of a Happy Marriage.”