One sunny summer morning this month, a group of 20 teenage girls gathered in a conference room in the sleek offices of a tech company in Manhattan. It was their fifth week of coding camp, and they were huddled around laptops, brainstorming designs for their final projects. One group was building a computer game that simulates the experience of going through life with depression and anxiety, while others were drafting plans for websites that track diversity at companies and help connect newly arrived immigrants with local community groups.

They were working intently when Reshma Saujani, the founder and chief executive of the nonprofit organization Girls Who Code, dropped in to offer some encouragement.

“How many of you take computer science class at your schools?” she asked. Hands shot up. “Are you the only girls in your class?” she asked. Most of the girls nodded.

Over the past five years, some 40,000 girls have learned to code through the organization’s summer camps and afterschool programs. But Ms. Saujani wanted to expand the group’s reach, and was looking for new ways to recruit girls into the tech industry.

For a tech evangelist, her solution was surprisingly retro and analog: books. Girls Who Code is creating a publishing franchise, and plans to release 13 books over the next two years through a multibook deal with Penguin. The titles range from board books and picture books for babies and elementary school children, to nonfiction coding manuals, activity books and journals, and a series of novels featuring girl coders.

This week, the organization is releasing its first two books — an illustrated nonfiction coding manual by Ms. Saujani, and a novel, “The Friendship Code,” which features a group of girls who become friends in an after-school coding club. 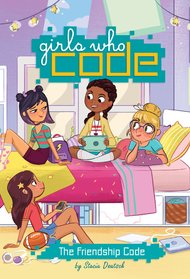 “I wanted to create a series of books that girls could see themselves in, where you could sneak in the algorithms and you sneak in the coding,” Ms. Saujani said.

Lately, the niche has gotten considerably more crowded. A growing number of children’s books authors are using fiction to teach the fundamentals of coding, a trend that has coincided with a push by Silicon Valley to fund and expand technology training in schools. The organization Code.org provides free online coding lessons, and has crafted coding curriculums for elementary, middle and high school students. Last year, Apple released a free app to teach the programming language Swift. Scratch Jr, a coding program designed for 4- to 7-year-olds, now has some 5 million users.

The Girls Who Code books are also arriving at a moment of heightened awareness and outrage over the scarcity and treatment of women in the tech industry. The issue has come into sharp focus in recent weeks, following the controversy over a Google engineer’s memo, in which he argued that women are underrepresented in computer science because of physiological differences. The memo, which led to the engineer’s firing, was widely seen as further proof of pervasive sexism in the industry.

The daughter of two engineers who came to the United States as political refugees from Uganda, Ms. Saujani is in some ways an unlikely advocate for computer literacy. Her academic and professional background is in law, history and politics, not technology. Before founding her coding organization, she worked as a lawyer for a hedge fund and ran for Congress in 2010. She lost, spectacularly, and decided to start a nonprofit to teach computer literacy to girls.

Since its founding in 2012, the organization’s coding clubs have rapidly spread across the country and now meet in 50 states. But demand has outstripped growth: 7,000 girls applied for 1,600 seats at the group’s 80 summer camps.

So in early 2015, in an effort to extend the group’s reach, Ms. Saujani, who published a book for adults about women and leadership in 2013, went to her literary agent and proposed a series of children’s books about coding. At the time, it seemed like an untapped market. Ms. Saujani met with several publishers, and was excited by Penguin’s strategy of flooding every corner of the children’s market, with board books like “Baby Code!” for 3- to 7-year-olds and novels for preteenage girls.

Some tech experts say books could prove an effective way to recruit future coders, particularly girls, if the stories make programming seem creative and appealing. But others caution that books aren’t a substitute for hand-on instruction. Josh Funk, a software engineer and the author of the picture book “How to Code a Sandcastle,” which will be published next year as part of the Girls Who Code line, sees books as a way to get kids interested in the subject, not as a stand-in for coding classes. “You can’t learn how to code by reading a picture book,” he concedes.

Some of the coding books for kids probably work better as gag gifts than as a training manual for mini Mark Zuckerbergs. John Vanden-Heuvel has created a lucrative subgenre in picture books with his series of coding books for babies, with titles like “HTML for Babies,” “JavaScript for Babies,” and “CSS for Babies.” Mr. Vanden-Heuvel, who created and self-published the books after his son was born sold some 100,000 copies on his own, then got a publishing deal with Sterling Children’s. He later moved on to writing coding books for older kids, like “C++ for Kids,” which is aimed at 3- to 5-year-olds.

Other authors are weaving coding concepts into the narratives of novels. In September, Disney Hyperion will publish Tamara Ireland Stone’s middle grade novel, “Click’d,” about a girl named Alice who builds an app that goes viral at her CodeGirls summer camp, then realizes a glitch could expose users’ private data. (At the end of the book, Ms. Ireland includes exercises that explain how binary code and algorithms work.)

Gene Luen Yang’s best-selling graphic novel series “Secret Coders” follows a group of kids who discover that their school’s janitor has a secret underground coding school, like Hogwarts, but for programming instead of magic. The series, which is illustrated by Mike Holmes, has become a surprise best-seller: The first three books have more than 200,000 in print. As the characters learn to program robots, readers are exposed to basic coding skills such as how to read binary numbers and sequence code. 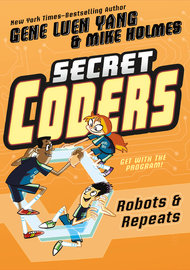 “I wanted to play with the similarities between magic and coding,” said Mr. Yang, who taught computer programming at a high school in Oakland, Calif., for 17 years.

Stacia Deutsch, who wrote “The Friendship Code” series, had no background in coding when Penguin hired her to co-write the books in consultation with Ms. Saujani. So she went to afterschool coding workshops at schools around Orange County, Calif., where she lives, and studied the organization’s teaching manual. Using their curriculum, she focused on a handful of programming concepts and integrated them into the plot.

The novel centers on a girl named Lucy, who joins an after-school coding club and starts getting mysterious notes on her locker. To understand the messages, she has to master coding concepts like input/output, loops and variables.

Ms. Deutsch struggled at times to get those ideas across. In moments of panic, she called a friend who is a coder for guidance. But in other ways, her status as a novice was an asset. Her characters didn’t know much about coding at the beginning of the novel, and neither, she presumes, will many of her readers.

“I wanted someone who didn’t know anything about coding to get excited about the possibilities,” she said.