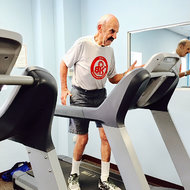 For Robert Goldfarb, 85, resisting the decline of old age goes beyond the treadmill.Credit

An electronic display on the treadmill in my local gym reminds me I’m not only running on the machine, but out of time. Its graph comparing changes in the runner’s heart rate to that of peers goes no further than age 70. I’m 85, and find it ominous that the machine presumes that anyone that old shouldn’t be on the thing.

Reminders that I’m now officially one of the old-old appear with greater frequency. Some are subtle, like the treadmill display; others are more jarring, like my daughter’s approaching 60th birthday. Most reminders are well-meaning: a young woman offering her seat on a bus, an airport employee hurrying over with a wheelchair, happily telling me I won’t have to walk to the gate or stand in line. I graciously decline their kindness, struggling not to protest, “But, I’m a competitive runner!” That I feel robust doesn’t matter; the man I see and the man they see are two very different people.

I recently read something the philosopher Montaigne wrote over 400 years ago: “The shorter my possession of life, the deeper and fuller I must make it.” His words inspired me to seek a path through old age without surrendering to it or ignoring its reality.

I began by fighting memory lapses. Rather than substituting “whatever” for an elusive word, I now strain to recall that word, even if means asking others to bear with me for a bit. I avoid phrases that suggest the end of things, like “downsizing” or “I no longer do that.” I subscribe to internet memory games. To recapture the excitement I felt in long-ago classrooms, I began rereading books I read in college.

I also decided to reach out to men my age to learn how they navigate through growing old. Like most of the men I began speaking with, I’m a product of the 1950s and its pressure to conform, to avoid risk, to shun anything that marked one as “different.” Many young people then were warned by parents that signing petitions bearing words like “protest” or “progressive” would get them rejected for a job or fired when they grew up. Men in my platoon didn’t embrace when we parted after serving in the Korean War. Closer than brothers, we settled for a handshake, knowing that’s what men did.

Almost immediately, I found conversations with men my age awkward. Attempts I made to discuss aging were met with jokes about the alternative. With few exceptions, those I spoke with regarded feelings as something to be endured, not discussed. It quickly became clear I was free to contemplate growing old, but not with them.

My wife suggested I meet with younger acquaintances to learn if they would talk with me about aging. I did, and found that men just 10 years younger spoke openly about changes in their minds and bodies. No one joked or changed the subject when one of them confided, “My father had Alzheimer’s, and I’m beginning to forget the same things he did,” or, “My firm’s managing partner said I was slowing younger associates and had to retire.”

It puzzled me that they felt so much freer to discuss feelings than men born just a decade earlier. Could it be because they were shaped by the ’60s, rather than the ’50s? Growing up, they protested what we accepted, challenged authority we obeyed, celebrated their individuality while we hoped to be one of the men in a gray flannel suit. They were the “me” generation, defined by Woodstock and rock ‘n’ roll, while my generation found comfort in Eisenhower’s paternal leadership and listening to soothing ballads like George Shearing’s “I’ll Remember April” and Margaret Whiting’s “Moonlight in Vermont.” Separated by a sliver of time, the two decades seem an eternity apart.

As I seek to reinvent myself, questioning what I do out of habit and what I’m not doing that could be liberating, it’s the voices of these younger men that I hear as I run on the treadmill today. That and the voice of Frank Sinatra from the ’50s, crooning a line from “September Song” that captures what I’ve been feeling: “But the days grow short when you reach September.” It’s realizing that I’ve reached November that presses me forward, ignoring the treadmill’s display, hoping I can lead a deeper and fuller life before I run out of time.

Robert W. Goldfarb is a management consultant and author of “What’s Stopping Me From Getting Ahead?”