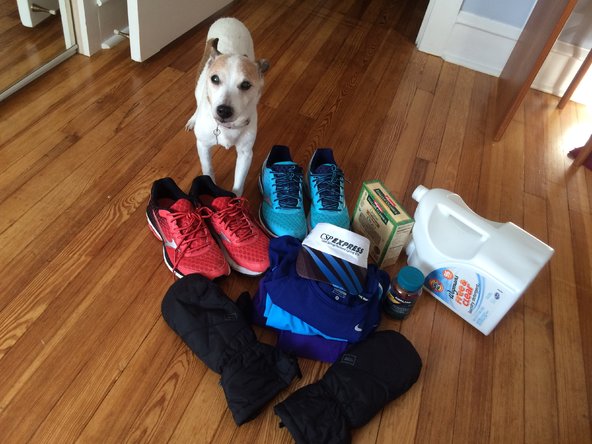 In May I ran the New Jersey Marathon. Before I started training for the race on New Year’s Eve, I wondered how much this, my sixth marathon, would cost me. And not just the race fee — I knew that one, since I had signed up for the race in November — but the total of every little thing that I would spend money on to get me from my first training run to race day.

After a deep dive into my personal finances and a talk with a professor of finance, I can tell you that it cost me a lot. Eighteen weeks of training and one marathon cost me more than $1,600. Here’s how I arrived at my number.

Instruction. I used the second edition of the “Hansons Marathon Method,” to train for the race. It included my schedule, plus information on other important things like strength training and race strategy. The book retails for $18.95, though I was sent an advance press copy from the publisher.

Gear. Running a lot requires extra stuff to run in. So while I already had shirts and shorts and socks, I still added on while training, including two pairs of shoes, another pair of long winter tights, plus two new pairs of capri tights and two new pairs of shorts, a handful of new shirts, a new tank and visor to wear on race day (though I wound up wearing a hat I already had for the race because of rain), even a pair of ski mittens to wear over my regular running gloves during bitter cold training.

If you’re starting from scratch, this number could be much higher, depending on how geared out you get. I already had a tube of Body Glide anti-chafing lotion. I already had a GPS watch. I already owned the shorts, hat and socks I wore on race day. So my gear costs are much lower than that of someone who’s just starting out.

Intermediate Races. Racing shorter distances while training for a marathon provides a check-in to see how you’re doing speed-wise (and psychologically) and breaks up the monotony of training. I also use shorter races to test out what I will wear on marathon day to make sure it all works. During this training cycle, I ran two 5Ks and two 10-milers.

Food. This one surprised me. I expected I’d be eating a lot more (or treating myself a lot more) after my 623 miles of training runs. But what I spent on food during that time, including at the grocery store, on takeout, on meals eaten at restaurants and coffee, came out to be about $80 higher than what I spent during a similar period when I wasn’t training for a marathon. I know that I ate more, but I ate better and spent less on junk food, and ate out a lot less simply because I had less time.

Running Fuel. While running, my fuel strategy is a simple one: one black cherry Clif Shot Blok every four miles. I had some of these on hand before I started training, but I had to buy more: 10 sleeves at $1.99 per sleeve.

Ibuprofen. Things hurt. So I bought a two-bottle pack of Kirkland brand ibuprofen from Costco, 500 tablets per bottle. A half bottle is left.

Laundry. My water bill didn’t go up during this time, but I did buy more laundry detergent than usual.

Gym Membership. I didn’t use the treadmill during this training cycle, but I belong to the gym for access to weight machines and free weights. As I got deeper into my training, I tended to do more strength training at home, but I didn’t stop paying for the gym during my 18 weeks of training.

Pet Care: I don’t have kids, but I do have a dog, and she needed looking after when I was out running races. Most of the time, friends or family watched Emily, my Jack Russell terrier. A dog walker filled in the gaps when they weren’t available. I needed five walks, at $10 per walk.

Sports Massages. Two ways I try to keep my weak spot (my right hip) from knocking me out of training are through strength training and sports massage. Both saved me from a world of hurt and got me to the starting line relatively healthy. Getting several sports massages, at $60 to $75 per massage, was the pricier of those strategies.

Opportunity Costs. Training for a marathon takes a lot of time. Those 623 miles, in fact, took me about 114 hours to run — hours that, as a self-employed writer, I could be working. So I could add into this equation the opportunity cost, or “what you could be have been doing with that time and energy instead of doing this,” said Nejat Seyhun, a professor of finance at the University of Michigan Ross School of Business. Take those hours, multiply them by what I typically make per hour and, yikes: big opportunity cost.

But, while I’m not paid to run, I do write about running and I’m paid for that work – and the experience has provided fodder for a number of paid stories. Running also makes me a better writer by giving my brain a time out, and I tend to be more efficient in my work when I’m running: I don’t dillydally so much; I just do. In that case, said Dr. Seyhun, my opportunity cost is much lower. “See, you’re thinking like an economist already,” he said when I explained how running is part of my job. Given how much my marathon training experiences have influenced my work, I’m going to put the cost at:

Transportation/Lodging. According to Running USA, races that require an overnight trip will typically cost runners $104 in transportation, $147 in airfare, and $213 in lodging. I skipped a lot of that for the New Jersey Marathon, and not just because I ran a race less than a two-hour drive from my house. My dad paid the hotel bill for the marathon, and my mom drove me to and from (because she was running the half-marathon that day). I did pay for some transportation costs to intermediate races during the training cycle, though: $37 for tolls, $58 for gas.

Post-Race Celebrations. When I finished the marathon, I wanted nothing more than a hot shower, a beer, and then to shovel food into my face. When I got back to the hotel, I had that beer and handfuls of Utz Party Mix, which I eat only after I run a marathon ($4.50 for a six-pack of Miller Lite pony beers; $10.99 for the tub of Party Mix). Afterward my running group, which included three runners and six people who came to cheer, had a late lunch at Porta in Asbury Park. My portion of the bill, which included pizza, pasta and two Bloody Marys, came to $35.

Later that night, my mom and I drove to the Applebee’s by our hotel, and I spent $23.22 more. The next day, I took a friend out to Han Dynasty in Philadelphia to thank him for coming to the race, and maybe because I was still hungry too: $89.75.