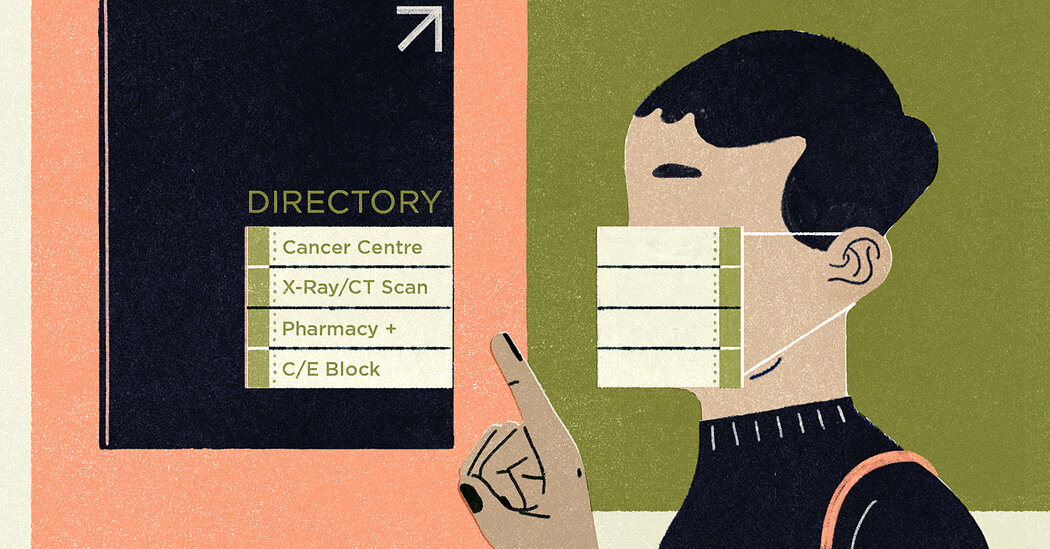 While a raging pandemic continues to force shutdowns and slowdowns throughout the country, another major risk to human health is not taking a sabbatical: cancer.

In the early months of the pandemic, millions of people heeded warnings and fears about contracting the coronavirus and avoided, or couldn’t even get, in-person medical visits and cancer screenings, allowing newly developed cancers to escape detection and perhaps progress unimpeded.

During this time, there was a steep decline in screenings for cancer, as well as a reluctance of patients with cancer to participate in clinical trials for cancer treatments. Many mammography centers, dermatology offices and other venues for cancer screenings remained closed for months, and routine colonoscopies, which should be done in hospitals or surgical centers, were actively discouraged to minimize strain on medical personnel and equipment and reduce the risk of contagion.

Still, Dr. Norman E. Sharpless, director of the National Cancer Institute, warned in June that missed routine screenings could lead to 10,000 or more excess deaths from breast and colorectal cancers within the next decade.

Cancers cannot be treated unless they’re detected, and a review of 34 studies published in October in the BMJ reported that for every four-week delay in cancer detection and treatment, the risk of death from cancer rises nearly 10 percent, on average. The study found increased mortality following delays in treatment for 13 of 17 cancer types. Following a four-week delay in surgery for breast cancer, the death rate increased by 8 percent; for colorectal cancer, it rose 6 percent.

The hazard of delayed screenings is greatest for people with known risk factors for cancer: a family or personal history of the disease, a previous abnormal Pap smear, prior findings of polyps in the colon or rectum, or, in the case of breast and certain other cancers, having genetic mutations that seriously increase cancer risk.

Most screening facilities have since put safety procedures in place that greatly reduce the chance of contracting the coronavirus, both for staff and patients. Although I had postponed my annual mammogram for four months, when I did go in September I was impressed with how well the facility was run — no one else in the waiting room, everyone masked and hand sanitizer everywhere.

Dr. Barry P. Sleckman, director of the O’Neal Comprehensive Cancer Center at the University of Alabama at Birmingham, said in an interview, “When it comes to screening for cancer, people should balance the possibility of contracting the virus with their potential cancer risk. People should do everything possible to keep up with cancer screenings.”

However, Dr. Sleckman added, “If a woman is young and has no family history of breast cancer, she can probably wait six months for her next screening mammogram.” He also suggested discussing the matter with one’s personal physician, who probably also knows the safest facilities for screening.

If someone is found to have cancer, he emphasized, “There’s no reason to delay treatment. If a woman has cancer in a breast, it needs to be removed, and she should go to a hospital where she can be treated safely.”

Dr. David E. Cohn, chief medical officer at The Ohio State University Comprehensive Cancer Center, said that in the early months of the pandemic “we experienced a significant decline in new patients. Even some patients with symptoms were afraid to come in or couldn’t even see their doctors because the offices were closed. This could result in a delayed diagnosis, more complex care and potentially a worse outcome.”

But he said his center has since returned to baseline, suggesting that, despite the fall’s surge in Covid-19 cases, few cancer patients now remain undiagnosed and untreated.

“We made creative adaptations to Covid” to maximize patient safety, Dr. Cohn said in an interview. “For certain cancers, instead of doing surgery upfront, we treated patients with radiation and chemotherapy first, then did surgery later” when there was less stress on hospital facilities and personnel and patients could be better protected against the virus.

Confused by the terms about coronavirus testing? Let us help:

Dr. Cohn said that certain kinds of supportive care can be delivered remotely to cancer patients and their families — even genetic counseling, if a DNA sample is sent in. However, he added, “the majority of cancer treatment has to be administered in person, and surveillance of cancer patients is best done in face-to-face visits.”

Now with the virus surging around the country, many medical centers may be forced to again limit elective procedures, those not deemed urgent. But, Dr. Sleckman said, “Cancer treatment is not elective — it’s urgent and should not be delayed.”

Learning that one has cancer, even when it is early and potentially highly curable, is likely to strain a person’s ability to cope with adversity, all the more so when the diagnosis occurs in the midst of an already highly stressful and frightening pandemic.

Kristen Carpenter, a psychologist at the Ohio cancer center, said the constraints of the pandemic are “using up a lot of people’s reserve for dealing with adversity.” Adding a cancer diagnosis on top of that may initially cause people to fear they can’t deal with it, she said in an interview.

But it is nearly always possible to make more room in a person’s “bucket of reserve,” she said, for example, by identifying things that bring joy or a sense of accomplishment. Even though the pandemic may preclude great joys, Dr. Carpenter said, “people can create a constellation of smaller joys, for example, by reading a book, taking a walk or even a long shower. A little goes a long way to relieve the stresses of the day and build up the reserve needed to help you deal with the cancer.”

Noting that many people have found new ways to interact with others during the pandemic, “this is all the more important to do in the face of cancer,” Dr. Carpenter said. “Remember, you’re not just your cancer. You’re a whole person experiencing something. Take time to identify your needs and tell people what they are — don’t wait for them to ask.”

This advice is especially critical to cancer patients whose disease or treatment has compromised their immunity, leaving them especially vulnerable to infection by the coronavirus. A friend with chronic lymphoma who must avoid in-person contact with her five young grandchildren visits them through a glass door and observes their delight in retrieving the little treats she leaves for them on her porch.

Think, too, of how you’ve faced difficulties in the past, “how you’ve adapted to things you previously believed to be unimaginably difficult,” Dr. Carpenter suggested. Resiliency in the face of cancer during Covid need not have a limit, she said. 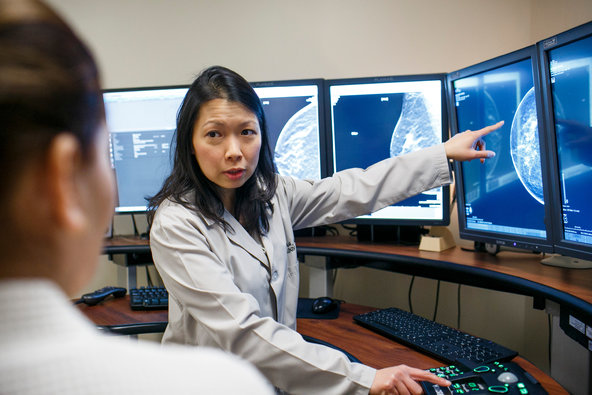 Dr. Dorothy Lam explains the results of a mammogram to a patient at Swedish Covenant Hospital in Chicago in 2015.Credit Taylor Glascock for The New York Times

About 40 percent of women who have mammograms are found to have dense breast tissue, a normal finding that can make it harder to detect cancer. But many of these women receive letters in the mail about the finding that can be hard to decipher, a new study found.

“Twenty percent of the population only reads at an eighth-grade level, and many more don’t read at a much higher level than that,” said Nancy R. Kressin, one of the study’s authors who is a professor at Boston University School of Medicine and a senior researcher at the Veterans Affairs Boston Healthcare System.

“For many women, these notifications are not going to be easy to read” and might even be alarming, she said. “We’ve talked to some women who received these letters, and their reaction was ‘Oh my God, I have cancer.’ ”

Dense breast tissue means that a woman’s breasts have more connective and fibrous tissue than usual. Dense breasts both increase the risk of breast cancer and make it less likely that tumors will be seen on a mammogram, but having dense breasts does not mean a woman has cancer.

The study, published as a letter in JAMA, analyzed the notification letters sent out in 23 states and found that many use such complex language that patients need a college degree to understand them. The letters sent out in New Jersey and Connecticut were written at a postgraduate degree level, the report found. Yet only 12 percent of American adults have proficient health literacy, according to the National Assessment of Adult Literacy.

For years women were not routinely informed of the finding. Now, 26 states have laws on the books that require mammography testing facilities to tell women who have the breast cancer imaging scans if they have dense breast tissue as part of their results, according to Nancy Cappello, who founded Are You Dense?, a nonprofit organization that educates the public about the risks of dense breast tissue.

She acknowledged that the notification letters, which are crafted during the legislative process and are different in every state, may be complex but said they are meant to trigger a discussion between the patient and her doctor.

The notifications were “never intended to replace conversations, but to enhance them,” said Dr. Cappello, who was given a diagnosis of advanced breast cancer in early 2004, weeks after receiving a “normal” result from a mammogram. After her diagnosis, she learned that she had dense breast tissue. But although she had been having mammograms every year for over a decade, she was never informed she had dense breasts and that the scans were less reliable as a result.

She called the study “shortsighted” because it evaluated several sentences of a letter in isolation, “without assessing the readability of the entire report.”

“Why don’t the authors question the readability levels of all medical reporting results that patients receive?” Dr. Cappello asked.

The new analysis in JAMA measured the readability and understandability of notification letters and found that most were written at a level higher than the recommended seventh- or eighth-grade readability level, and many were at a high school or college readability level.