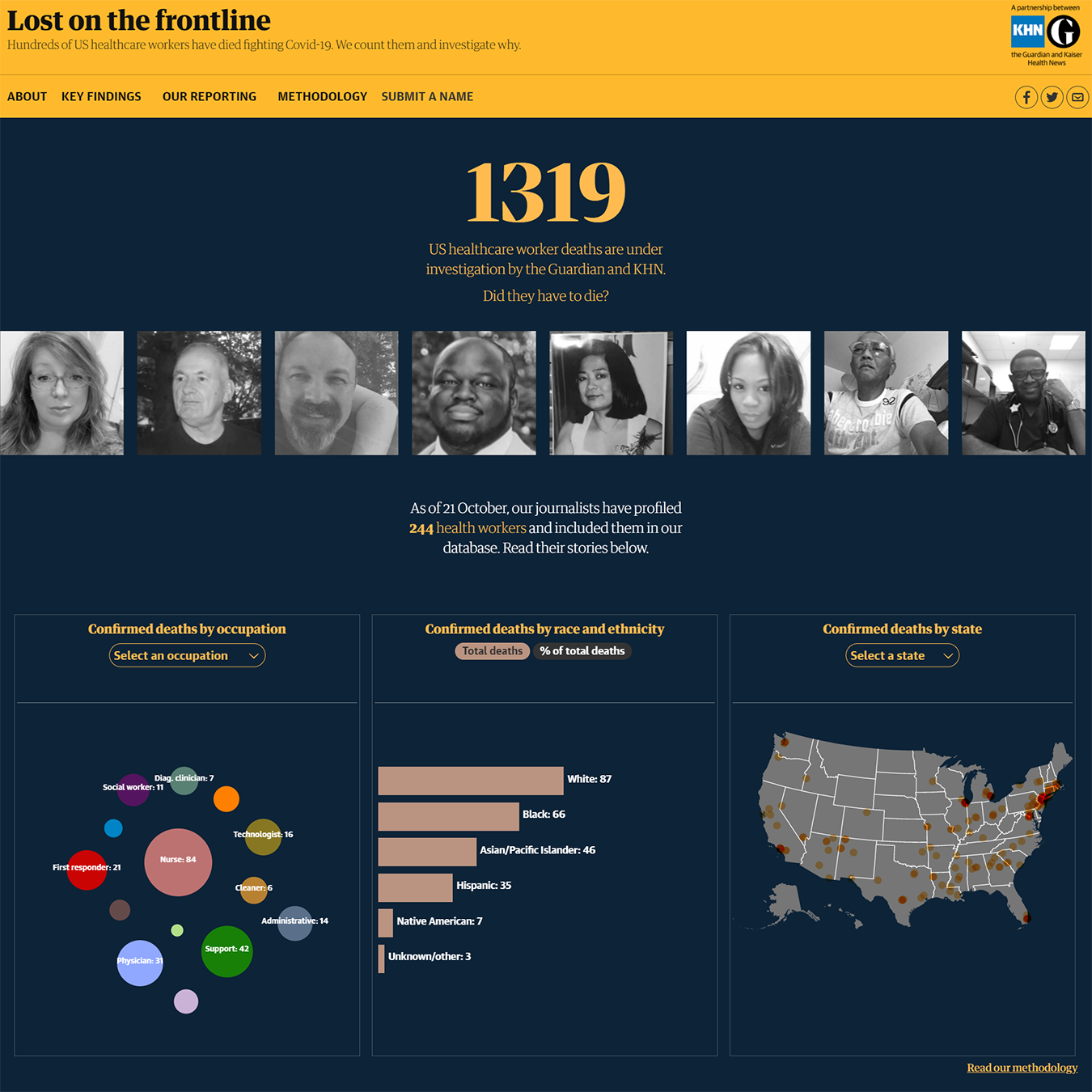 Journalists from KHN and the Guardian have identified 1,318 workers who reportedly died of complications from COVID-19 they contracted on the job. Reporters are working to confirm the cause of death and workplace conditions in each case. They are also writing about the people behind the statistics — their personalities, passions and quirks — and telling the story of every life lost.

More From This Series:

In March, Sue Williams-Ward took a new job, with a $1-an-hour raise.

The employer, a home health care agency called Together We Can, was paying a premium — $13 an hour — after it started losing aides when COVID-19 safety concerns mounted.

Williams-Ward, a 68-year-old Indianapolis native, was a devoted caregiver who bathed, dressed and fed clients as if they were family. She was known to entertain clients with some of her own 26 grandchildren, even inviting her clients along on charitable deliveries of Thanksgiving turkeys and Christmas hams.

KHN and The Guardian are tracking health care workers who died from COVID-19 and writing about their lives and what happened in their final days.

Without her, the city’s most vulnerable would have been “lost, alone or mistreated,” said her husband, Royal Davis.

Despite her husband’s fears for her health, Williams-Ward reported to work on March 16 at an apartment with three elderly women. One was blind, one was wheelchair-bound, and the third had a severe mental illness. None had been diagnosed with COVID-19 but, Williams-Ward confided in Davis, at least one had symptoms of fatigue and shortness of breath, now associated with the virus.

Even after a colleague on the night shift developed pneumonia, Williams-Ward tended to her patients — without protective equipment, which she told her husband she’d repeatedly requested from the agency. Together We Can did not respond to multiple phone and email requests for comment about the PPE available to its workers.

Still, Davis said, “Sue did all the little, unseen, everyday things that allowed them to maintain their liberty, dignity and freedom.”

He said that within three days Williams-Ward was coughing, too. After six weeks in a hospital and weeks on a ventilator, she died of COVID-19. Hers is one of more than 1,200 health worker COVID deaths that KHN and The Guardian are investigating, including those of dozens of home health aides.

During the pandemic, home health aides have buttressed the U.S. health care system by keeping the most vulnerable patients — seniors, the disabled, the infirm — out of hospitals. Yet even as they’ve put themselves at risk, this workforce of 2.3 million — of whom 9 in 10 are women, nearly two-thirds are minorities and almost one-third are foreign-born — has largely been overlooked.

Home health providers scavenged for their own face masks and other protective equipment, blended disinfectant and fabricated sanitizing wipes amid widespread shortages. They’ve often done it all on poverty wages, without overtime pay, hazard pay, sick leave and health insurance. And they’ve gotten sick and died — leaving little to their survivors.

Speaking out about their work conditions during the pandemic has triggered retaliation by employers, according to representatives of the Service Employees International Union in Massachusetts, California and Virginia. “It’s been shocking, egregious and unethical,” said David Broder, president of SEIU Virginia 512.

The pandemic has laid bare deeply ingrained inequities among health workers, as Broder puts it: “This is exactly what structural racism looks like today in our health care system.”

Every worker who spoke with KHN for this article said they felt intimidated by the prospect of voicing their concerns. All have seen colleagues fired for doing so. They agreed to talk candidly about their work environments on the condition their full names not be used.

Tina, a home health provider, said she has faced these challenges in Springfield, Massachusetts, one of the nation’s poorest cities.

Like many of her colleagues — 82%, according to a survey by the National Domestic Workers Alliance — Tina has lacked protective equipment throughout the pandemic. Her employer is a family-owned company that gave her one surgical mask and two pairs of latex gloves a week to clean body fluids, change wound dressings and administer medications to incontinent or bedridden clients.

When Tina received the company’s do-it-yourself blueprints — to make masks from hole-punched sheets of paper towel reinforced with tongue depressors and gloves from garbage bags looped with rubber bands — she balked. “It felt like I was in a Third World country,” she said.

The home health agencies that Tina and others in this article work for declined to comment on work conditions during the pandemic.

In other workplaces — hospitals, mines, factories — employers are responsible for the conditions in which their employees operate. Understanding the plight of home health providers begins with American labor law.

The Fair Labor Standards Act, which forms the basis of protections in the American workplace, was passed in an era dually marked by President Franklin Delano Roosevelt’s New Deal changes and marred by the barriers of the Jim Crow era. The act excluded domestic care workers — including maids, butlers and home health providers — from protections such as overtime pay, sick leave, hazard pay and insurance. Likewise, standards set by the Occupational Safety and Health Administration three decades later carved out “domestic household employment activities in private residences.”

“A deliberate decision was made to discriminate against colored people — mostly women — to unburden distinguished elderly white folks from the responsibility of employment,” said Ruqaiijah Yearby, a law professor at St. Louis University.

In 2015, several of these exceptions were eliminated, and protections for home health providers became “very well regulated on paper,” said Nina Kohn, a professor specializing in civil rights law at Syracuse University. “But the reality is, noncompliance is a norm and the penalties for noncompliance are toothless.”

Burkett McInturff, a civil rights lawyer working on behalf of home health workers, said, “The law itself is very clear. The problem lies in the ability to hold these companies accountable.”

The Occupational Safety and Health Administration has “abdicated its responsibility for protecting workers” in the pandemic, said Debbie Berkowitz, director of the National Employment Law Project. Berkowitz is also a former OSHA chief. In her view, political and financial decisions in recent years have hollowed out the agency: It now has the fewest inspectors and conducts the fewest inspections per year in its history.

Furthermore, some home health care agencies have classified home health providers as contractors, akin to gig workers such as Uber drivers. This loophole protects them from the responsibilities of employers, said Seema Mohapatra, an Indiana University associate professor of law. Furthermore, she said, “these workers are rarely in a position to question, or advocate or lobby for themselves.”

Should workers contract COVID-19, they are unlikely to receive remuneration or damages.

Demonstrating causality — that a person caught the coronavirus on the job — for workers’ compensation has been extremely difficult, Berkowitz said. As with other health care jobs, employers have been quick to point out that workers might have caught the virus at the gas station, grocery store or home.

Many home health providers care for multiple patients, who also bear the consequences of their work conditions. “If you think about perfect vectors for transmission, unprotected individuals going from house to house have to rank at the top of list,” Kohn said. “Even if someone didn’t care at all about these workers, we need to fix this to keep Grandma and Grandpa safe.”

Nonetheless, caregivers like Samira, in Richmond, Virginia, have little choice but to work. Samira — who makes $8.25 an hour with one client and $9.44 an hour with another, and owes tens of thousands of dollars in hospital bills from previous work injuries — has no other option but to risk getting sick.

“I can’t afford not to work. And my clients, they don’t have anybody but me,” she said. “So I just pray every day I don’t get it.”