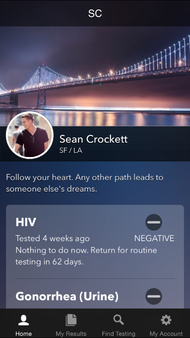 Midway through her sophomore year of high school, my patient told her parents that she had missed two periods and was worried she might be pregnant.

Stunned to learn that she was sexually active, her parents took her to the pediatrician, who had another surprise: She wasn’t pregnant but she did have H.I.V.

I met her a few days later in my H.I.V. clinic, and watched her start crying as I told her that her H.I.V. was advanced and that she needed antiviral treatments really soon.

Sadly, her story of late diagnosis is far from uncommon. Ten thousand people ages 13 to 24 are given H.I.V. diagnoses every year in the United States, and epidemiologists estimate fully half of young people with H.I.V. do not know it. While the virus is no longer considered the death sentence it was decades ago, late diagnoses like my patient’s can undermine the life-saving benefits of antiviral medications, leading to greater risk of AIDS and death.

Part of the problem is the low rate of H.I.V. testing in young people, despite the recommendation by the Centers for Disease Control and Prevention that every sexually active person over the age of 13 get tested. Earlier this year, C.D.C. researchers reported in Pediatrics that pediatricians and parents are testing five times fewer young people for H.I.V. than recommended by national guidelines. Only 22 percent of sexually active high school students were ever tested for H.I.V., and, even worse, the likelihood that young women like my patient were tested for H.I.V. actually fell from 2011 to 2013.

Tio Pier, a Stanford University student who advocates for testing and sexual health education, says his high school teachers provided basic education about H.I.V. in a health class but, “they don’t follow up and say, ‘and if you feel like you need a testing resource you could go here…’ There was none of that.” Indeed, a 2015 survey showed that less than half of sexually active gay and bisexual adolescents even knew where they could get an H.I.V. test.

A number of groups are working on ways to improve access to H.I.V. testing for young people. Tim Kordic, a health educator with the Los Angeles Unified School District, is partnering with a company called Healthvana to place educational posters about H.I.V. in classrooms and provide students with a free iPhone app that harnesses GPS technology to locate nearby H.I.V. testing facilities.

Most public health departments and community health clinics offer free H.I.V. testing to people of all ages, and in New York and 30 other states, children under 18 have legal access to H.I.V. testing without parental notification. Kids who test positive can access life-saving H.I.V. therapy early, with drug costs often covered by the federally funded Ryan White HIV/AIDS Program. Kids who test negative leave the clinic better educated and probably with a pocketful of free condoms.

Ramin Bastani, the chief executive of Healthvana, says their app has delivered the results of over 200,000 H.I.V. and sexually transmitted infection tests to patients at participating health care providers across the country. The confidential service also gives users information on how to access treatment if a result is positive. Some young people post negative H.I.V. testing results on social media as a way of encouraging others to get tested, Mr. Bastani said.

Healthvana isn’t the only app seeking to connect youth to H.I.V. testing. The United States Department of Health and Human Services has its own locator app pointing out nearby testing services and a panoply of other resources like H.I.V. care, substance abuse services and housing assistance. Yet another app connects users to free condoms, and there is even a mobile game designed to sensitize youth to the risks of teenage pregnancy.

“It’s hard for teenagers to physically go places, and to know that they will be welcomed,” says Karen Rayne, a sexuality educator and author of the book “Breaking the Hush Factor: Ten Rules for Talking With Teenagers about Sex.” To Dr. Rayne, the privacy of a mobile app – including the ability to delete the app after use – is a great way to “draw teens out” and “give them the confidence to access a public physical space” like an H.I.V. testing clinic.

My patient didn’t have access to any of these resources. Fearing fellow churchgoers would judge them for her diagnosis, her parents kicked her out of the house. She fought to finish high school while sleeping on a neighbor’s couch and struggled to take medications and keep her medical appointments. At 18 she moved to a new state, hoping to start a new life.

She and the 10,000 other young people in the United States given H.I.V. diagnoses every year deserve more. They need evidence-based sex education, supportive parenting and better access to the H.I.V. testing information that could save their lives.

Tim Lahey, M.D., M.M.Sc., is an H.I.V. physician, ethicist and director of education at the Dartmouth Institute for Health Policy & Clinical Practice in Dartmouth’s Geisel School of Medicine. He is a member of the Dartmouth Public Voices Fellowship.