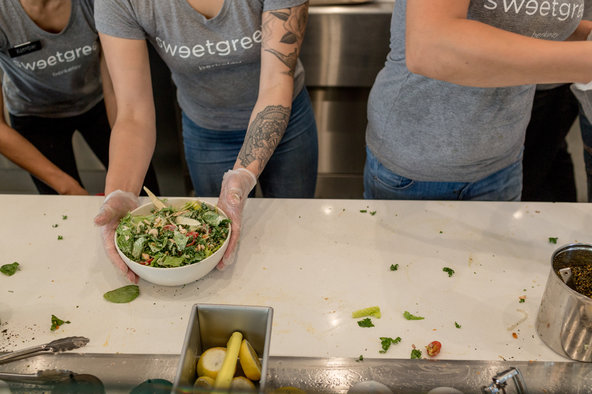 Healthful, fast and affordable food is the holy grail of the public health and nutrition community. A popular restaurant chain shows just how much of a challenge that is.

It began when three Georgetown University students were frustrated that they could not find a healthy fast-food restaurant near their campus. With money raised from family and friends, they started their own, renting a small storefront on M Street in Georgetown. The result was Sweetgreen, a restaurant that offered organic salads, wraps and frozen yogurt. Pretty soon, the daily line of lunchtime customers stretched out the door and around the corner.

Ten years later, the line is still there, but Sweetgreen has grown into a nationwide salad chain, with more than 40 locations. Sweetgreen is part of a small but growing breed of farm-to-table fast-food chains – like Chopt Creative Salad Company on the East Coast and Tender Greens in California – that are giving fast-food restaurants a plant-based makeover. Their mission: to fix fast food, which has long been fattening and heavily processed. 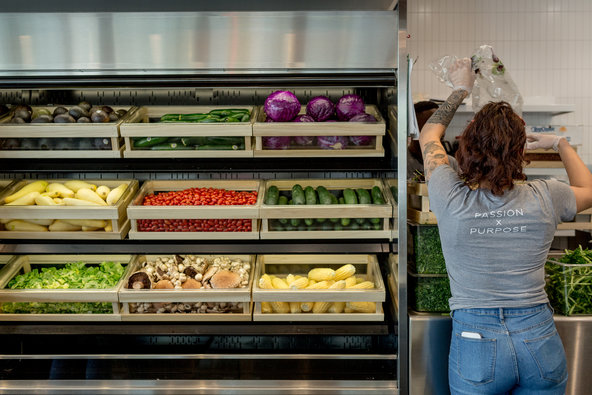 At Sweetgreen, fresh vegetables, cheeses and other ingredients are shipped directly to each restaurant from nearby farms and then chopped or cooked on site.Credit Jason Henry for The New York Times

Sweetgreen’s owners say their goal is to offer customers foods made with nutritious, sustainable and locally grown ingredients. The company has decentralized its food sourcing and production. Fresh vegetables, cheeses and other ingredients are shipped directly to each restaurant from nearby farms and then chopped or cooked on site. They don’t sell soda or use refined sugar.
Sweetgreen expects to open another 20 stores in major cities around the country this year, and eventually to expand to places where experts say healthy, delicious fast food is needed most — low-income neighborhoods.

But while the chain has proven there is a big appetite for more healthful fast food, the goal of taking this concept to poor areas may be a distant reality. The company and other chains like it operate almost exclusively in affluent communities, far from the low-income food deserts where obesity is rampant and farmers’ markets and healthy food stores are scarce. And with salads that typically cost between $9 and $14, some question whether a healthful fast-food chain like Sweetgreen can ever be affordable for average Americans.

Maegan George, a Columbia University student who lives near a Sweetgreen, calculated that for the price of one Sweetgreen salad, she could buy the same ingredients in bulk at a local market and make several similar salads at home.

“I’m a first-generation student and I’m on full financial aid,” she said. “Sweetgreen is delicious and I enjoy it. But there’s no way I could afford to eat there on a regular basis.”

Jackie Hajdenberg, another Columbia student, wrote about the restaurant for the campus newspaper, The Spectator, earlier this year, lamenting that on a per calorie basis, a salad at Sweetgreen was three times the price of a Big Mac at McDonald’s.

“Sweetgreen has not only made it easier for people to make healthy decisions – it has also illustrated the unequal socioeconomic landscape of the world in which we live,” she wrote. 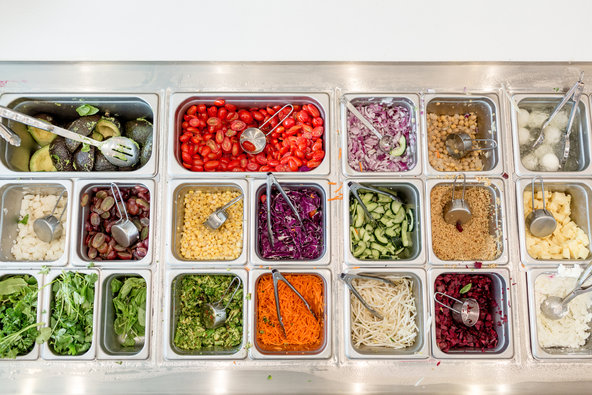 Salad options at Sweetgreen change often, depending on what is available at local farms.Credit Jason Henry for The New York Times

Sweetgreen says it prices its food so that it can compensate its suppliers and employees fairly, and that it expects nutritious fast food to become more affordable as the healthy food movement grows. Nicolas Jammet, a co-founder of Sweetgreen, said the company wants to serve lower-income customers, and has long-term plans to expand to low-income communities.

To get there, he said, the company will have to overcome hurdles involving its supply chain, the minimum wage and greater nutrition awareness and education among the public. For the past six years the company has been running a nutrition education program in schools that teaches children about healthier eating and locally grown food.

“It’s a long-term goal for us to be part of this larger systematic change that needs to happen,” he said. “But there are so many parts of this problem that need to be addressed.”

Mr. Jammet notes that the company was among the first to show that fast-food chains don’t need profits from soda and sugary drinks to succeed. He believes chains like Sweetgreen have caused a ripple effect throughout the fast-food industry.

In January, for example, Chick-fil-A unveiled a new kale, broccolini and nut “superfood” salad, responding to customer demands for “new tastes and healthier ways to eat in our restaurants.” McDonald’s is experimenting with kale salads, and Wendy’s is testing a spinach, chicken and quinoa salad.

“Companies like McDonald’s have more power to change the way that people eat than we do,” Mr. Jammet said. “We don’t see these companies as the enemy. We just have to force change on them.”

Public health experts say that such changes cannot come soon enough. A University of Toronto study recently showed that people have a higher risk of developing diabetes if they live in “food swamps” – an area with three or more fast-food restaurants and no healthy dining options.

Another study published in JAMA in June found that the percentage of Americans eating an unhealthy diet — high in sugar, refined grains, soft drinks and processed foods and low in fruits and vegetables — was on the decline, but the improvements in diet were much smaller for lower-income Americans. 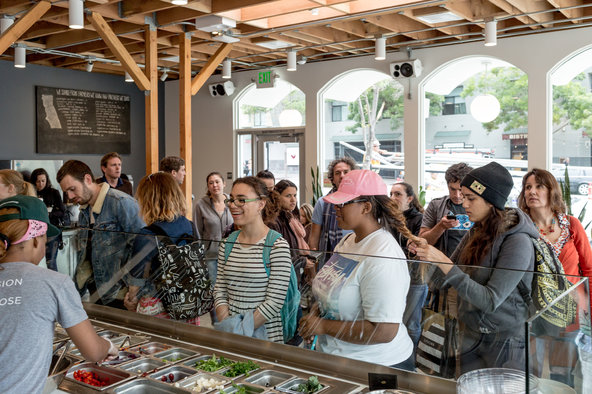 Customers wait in line at Sweetgreen in Berkeley, Calif.Credit Jason Henry for The New York Times

Overall about twice as many people from poor households have poor diets compared to those at higher income levels.
Why is traditional fast food so cheap? One reason is the underlying infrastructure of the industry. Many of the ingredients, like the soy that’s turned into oil for deep fryers, or the the corn that’s fed to animals and used to make high-fructose corn syrup, begin with crops that are heavily subsidized by the government. To make their food economical, many traditional fast-food chains mass-produce their food in large factories, often stripping it of fiber and other nutrients that decrease its shelf life, while adding salt, sugar and other flavorings and preservatives.

Then they freeze and ship the processed components, like burger patties, bread, pickles and sauce, to their restaurants. There they are reheated and assembled, often with minimal effort, ensuring that a Big Mac in Seattle looks and tastes the same as a Big Mac in Charlotte, N.C.

By comparison, every Sweetgreen location has a chalkboard that lists the farms where its organic arugula, peaches, yogurt or blueberries are produced. As a result, the menus vary by location and by season. In Boston, Sweetgreen stores use New England Hubbard squash. In Los Angeles, the menu features a different variety of squash grown locally in California.

Those differences mean fresher, more nutritious ingredients, but ultimately costlier food for customers — one of the obstacles that Sweetgreen and other chains like it will have to overcome if they hope to make their food more accessible to all income brackets.
Marion Nestle, a professor of nutrition, food studies and public health at New York University and the author of “Food Politics,’’ says restaurants like Sweetgreen offer an encouraging, but imperfect, model for making fast food more healthful.

“What’s not to like?” she asks. “The cost, maybe, but for people who can afford it the quality is worth it. Next step: Moving the concept into low-income areas.”