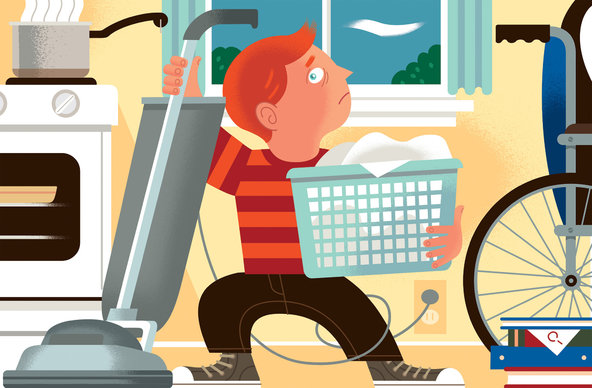 In the normal scheme of things, parents and grandparents take care of children when they’re sick or need help or sustenance. But in well over a million American families, this pattern is reversed, with children as young as 8, 9 or 10 partly or fully responsible for the welfare of adults or siblings they live with.

They may have to shop, prepare meals, clean house, do the laundry and tend to the hygienic needs of family members unable to care for themselves.

At the same time, these children must go to school, do their homework and attempt, but usually fail, to participate in nonacademic activities like sports and friendships widely recognized as important to well-rounded development.

Connie Siskowski, a registered nurse in Boca Raton, Fla., knows well the challenges these children face. As an 11-year-old with divorced parents, she began living with her grandparents in New Jersey. Her grandfather was, as she put it, “my hero, the only person I was close to, and it was my honor to help him with personal care issues.

“I slept in the living room so I could be near him in case he needed something during the night. One night I went into the bedroom to give him his medicine, and I found him dead of cardiac disease.”

There was no support system to help Connie, then 13, deal with the emotional fallout from this loss and put the pieces of her life back together. For years thereafter, she said she made poor personal choices, including three bad marriages. Her only good choice during this time: going straight from high school to nursing school, then getting advanced degrees in cardiac nursing and health care administration and a Ph.D. in educational leadership.

After her third marriage failed, she finally found her emotional equilibrium through counseling. She married a fourth time to a man who loves and respects her and, with his encouragement, felt compelled to do something to help caregiving children and “prevent some of the repercussions I experienced.”

In 2006, Dr. Siskowski started the Caregiving Youth Project, dedicated to helping young caregivers of ill, elderly or disabled family members. With support from grants and private donations her organization, now called the American Association of Caregiving Youth, works with school districts to identify children who need help navigating the competing demands of caregiving and school and still find some time to be a child.

Thus far, more than 1,000 children in Palm Beach County, Florida, have benefited from the support the organization offers to children 18 or younger who regularly help relatives with “physical or mental illness, disability, frailty associated with aging, substance misuse or other conditions.”

As many as 1.4 million American children from ages 8 to 18 care for a parent, grandparent or sibling with a disability or illness, the American Psychological Association says, but it remains largely a hidden problem. Parents are often too embarrassed to tell schools how much they depend on their children, and caregiving children fear being taken away from their parents.

Many of these youngsters come from low-income, often single-parent households. They often fall behind in school, suffer from sleep deprivation and struggle with depression, anxiety and stress, said Gail G. Hunt of the National Alliance for Caregiving. She said 58 percent of these children “are too worried to concentrate on their schoolwork,” yet few tell their teachers about their responsibilities at home. A 2006 study by Civic Enterprises conducted for the Bill and Melinda Gates Foundation found that 22 percent of high school dropouts in this country leave school to care for a family member.

Dr. Siskowski’s Caregiving Youth project, now at eight middle schools and nine high schools in Florida, offers classes on topics like coping with stress and anger and managing finances. Along with home-care demonstrations and respite care, the project sponsors field trips, overnight camps and other recreational and social activities. They hope to expand the program to other schools throughout the country.

Schools are made aware that the children’s responsibilities may be reasons for incomplete homework, absenteeism and poor academic performance. The project offers in-home tutoring and study programs and even provides computers and printers for children who can’t get to a library. After four house fires resulted from youthful cooking attempts, the association began distributing slow cookers and fire extinguishers.

Perhaps most important, the children learn that they are not alone and that there is help available. “The kids feel valued; they learn what love is, and it flips the anger and frustration they may otherwise feel,” Dr. Siskowski said. The project stays in their corner until they graduate from high school.

One beneficiary was Nickolaus Dent, featured on CNN in 2012. When Nickolaus was 11, his father died and he became primary caregiver for his mother, sick with H.I.V. The boy was responsible for the grocery shopping and cooking, cleaning and laundry. He made sure his mother took her medication, got her dressed and sometimes even helped her bathe.

He said he considered caring for his mother “a bigger priority than going to school.” But with the organization’s help, he managed to do both, getting A’s and B’s. His mother died in December 2012, and Nickolaus expects to graduate from high school this year.

Others now being helped include Julianna Doran, a 14-year-old ninth grader, and Alecia Locke, a 13-year-old seventh grader, both in Boca Raton. Julianna helps to care for her 10-year-old brother who has cerebral palsy. “He can’t walk; he can’t control his muscles; he’s dead weight,” she said. Julianna’s parents have serious back problems, so it’s largely her job to lift and carry him.

Alecia, whose parents are divorced, spends weekends with her dad, whose mobility is seriously limited by multiple sclerosis. She does his laundry and dishes, cleans floors, assists with his scooter and fills the gas tank.

Dr. Siskowski knows much more help for young caregivers is needed now and in the years ahead. “With the increase in technology, more people are living longer and being cared for at home,” she said. “There are more multigenerational households, more women working and more gaps in the health care system that are being filled by children. We need to get these kids recognized as a vulnerable population at risk of dropping out of school.”

She added, “Society can benefit from investing in them. Children who graduate from high school have the potential of earning $10,000 more a year. And many of these kids want to get into health care, which needs all the help it can get.”