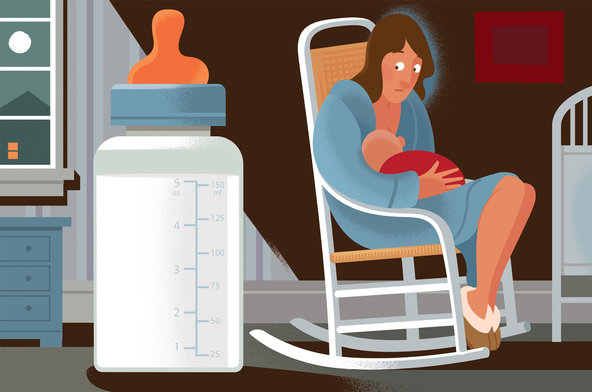 In 2001, when Dr. Alison Stuebe was pregnant with her first child, breast-feeding was a personal challenge that soon morphed into a professional research interest. Her son Noah was 3 months old when she began her residency in maternal-fetal medicine at Brigham and Women’s Hospital in Boston. Determined to nurse him for a year, she arrived at the hospital carrying a breast pump and, through sheer determination, more than met her goal. Noah was 2½ before he was weaned.

In the years since, with two more breast-fed sons, Dr. Stuebe has become a leading expert in the health value of breast-feeding for both mother and baby and a tireless advocate for new mothers trying to navigate its all-too-frequent challenges.

As the leading author of new guidelines from the American College of Obstetricians and Gynecologists, Dr. Stuebe insists that, given timely information, professional and workplace support, and hands-on help when needed, many more women would breast-feed their babies, and do so exclusively for the first half year of life, as recommended by the college, the American Academy of Pediatrics and the World Health Organization.

“Moms deserve better support, and obstetric providers can and must help, both by assisting their patients and by advocating for policies and practices that enable women to achieve their goals,” she said. And, the guidelines maintain, that support should begin as early as the first trimester of pregnancy.

To be sure, much has changed for the better since 1972, when breast-feeding by American women reached its nadir of 24 percent. Just three years prior, when my twin sons were born and a serious postpartum infection kept me in the hospital for 13 days, isolated from them, I had to beg for a breast pump every four hours. My desire to breast-feed was belittled by the nurse in charge: “You can always feed them formula,” she said dismissively as I dissolved in tears.

Today, more than three-fourths of women start to breast-feed, although more than half end up weaning their babies sooner than they would have liked, often short of six months. The target set byHealthy People 2020, a federal initiative to promote good health, would have nearly 82 percent of babies breast-fed initially, 60.6 percent at six months and 34 percent at one year.

Faced with financial and logistical stresses, many new mothers find it challenging to meet such a goal. Working women rarely get more than six weeks of paid maternity leave, and once back at work, the obstacles to expressing and storing breast milk can be daunting.

Accordingly, the new guidelines urge policy changes that “protect the right of a woman and her child to breast-feed,” including “paid maternity leave, on-site child care, break times for expressing milk,” and a place “other than a bathroom” to do so. Two decades ago, a former colleague of mine gave up her dream job after two frustrating months pumping milk in the office lavatory.

“Breast-feeding is optimal and appropriate for most women,” the new guidelines state. However, they add, while advice and encouragement by obstetric professionals are recommended, no woman should be coerced, pressured or unduly influenced to breast-feed.

Among the few medical contraindications to breast-feeding are infections in the mother – H.I.V., untreated tuberculosis, chickenpox or a herpes lesion on the nipple – and mothers being treated with cell-killing cancer drugs. Although clear-cut data are lacking on the effects of marijuana on breast-fed infants, the drug can get into breast milk and the guidelines discourage marijuana use by nursing mothers. Babies with the genetic disorder galactosemia, which impairs digestion of a sugar in milk, should not breast-feed.

During pregnancy, women trying to decide whether to breast-feed deserve to be informed about both its benefits and barriers and be given an opportunity and assistance to find ways around any obstacles, the guidelines state.

Assessing the health of a woman’s breasts and her prior experience with breast-feeding should be part of prenatal care, the guidelines urge. Past or anticipated difficulties and concerns should be discussed, ideally in conjunction with the woman’s partner, and strategies devised to make the desired feeding plan compatible with the needs and values of the woman and her family.

Ultimately, the obstetric guidelines conclude, a well-informed woman is best qualified to decide whether to breast-feed exclusively, combine breast with formula-feeding or feed only formula.

“Physicians should not be dogmatic,” Dr. Stuebe said. “Formula is not poison. Like antibiotics, if it’s needed, it should be used judiciously.”

I created my own plan when I could produce only a quarter of the milk my twins were consuming and faced conflicting advice from the obstetrician and pediatrician. I chose to combine the advice, first offering each baby the breast, then topping it off with formula. When I finally began producing enough milk, they all but gave up the bottle.

As in the past, the new guidelines disparage an all-too-common practice of outfitting new mothers at discharge with a “gift bag” that contains samples of formula, which can suggest that the hospital endorses formula feeding. Direct-to-consumer marketing of infant formula is also disparaged.

But even the most determined breast-feeder can sometimes have difficulty at first establishing successful nursing. Such women face an increased risk of developing postpartum depression “and should be screened, treated and referred appropriately,” the guidelines note.

Accordingly, there is now a growing legion of professional lactation specialists who can help. Some hospitals have them on staff. More good news: The services of a certified lactation consultant or counselor are now covered as preventive care under the Affordable Care Act.

A lactation specialist may also be helpful to women who stop nursing before they want to because of problems with pain, low milk supply or difficulty getting the infant to latch on to the breast.