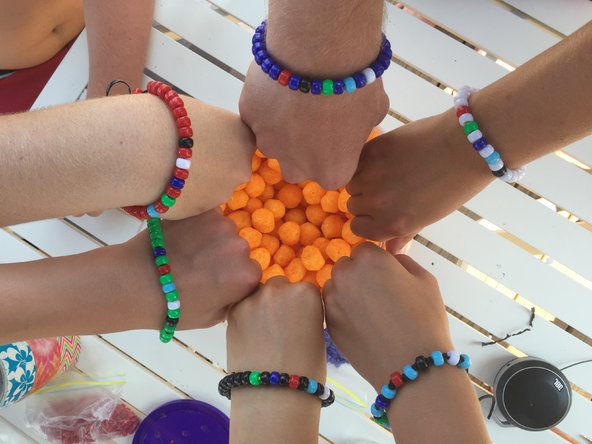 A group of Pennsylvania teenagers made beaded friendship bracelets as one of the many activities they came up with to spend 24 hours outdoors.Credit Kelly Kopera

Challenge No. 6: Let the kids take over.

So far, the Well Family Intentional Summer challenge has been led by the grown-ups. We’ve taught our children street games, encouraged them to try wild flavors of ice cream and walked or biked with them instead of driving. This week, we invite you to shake up that family dynamic and let your children make the call: What do they want to do (within reason) to make the most of this summer?

Research shows we gain more happiness from doing something than buying something, and like adults, children and teenagers get much of their pleasure from the planning process. Being a part of making something happen makes us value it even more.

And children have their own ideas about what makes for a perfect summer day.

Their choice might be fairly simple (my youngest son asked that we play mini-golf) or far more elaborate, like the plans of 17-year-old Kelly Kopera of Phoenixville, Pa. She wrote:

For the past four years, our neighborhood group of friends has set aside a day for the ultimate “intentional summer challenge” — staying outside all day.

It all started one night early in the summer of 2013. My brother, Tim, and I were out in the driveway enjoying the first of many summer nights to come, and we didn’t want to go inside. One of us said to the other: wouldn’t it be fun to spend a whole day outside?

A few weeks later, we did it — we stayed outside from 11 a.m. to 11 p.m., accompanied by some friends and neighbors here and there, and time allotted for bathroom breaks. The day, which we dubbed “11 to 11,” became a tradition in our family and neighborhood.

The next year’s 11 to 11 was successful, with growing participation and commitment. Since our kitchen was undergoing renovations, we had a Porta-Potty in our yard, and didn’t even have to go inside to use the bathroom! The following year, however, we wanted to take it a step further. With a core group established — my brothers Tim (now 16) and Kyle (14), along with our friends since grade school, Kimmy (16), Keli (16) and Matt (15) — we stayed outside from 11 a.m. to 11 p.m., and then slept in a tent in our backyard before going back inside at 11 the next morning. We also declared it a “tech-free day” — no one was allowed to look at their phones for the entire time we were outside, enjoying summer and each other’s company.

Last year’s “11 to 11 to 11″ featured “extreme hopscotch” extending all the way down our block, a water balloon fight, a trip to our local pool, backyard croquet, a scavenger hunt and a bonfire. This year we’ll be going to the pool and a nearby creek to keep cool; playing “glowquet” (croquet after dark with glow sticks on the wickets), card and board games, and classic summer games like manhunt; and capping off the night with some stargazing before we get into the tent for the final 12 hours. It’s a summer tradition that we all look forward to every year, and we’ve been planning this one for a long time to make it the best one yet!

Last week, we challenged you to learn the name of a wildflower, tree or something else you find outside — and we offered a quiz to test your plant knowledge. Some of you complained that the quiz was too easy; about a third of you got all the answers right.

Anne, a reader from Rome, asked for the names in Latin, too. “That way people all over the world will know what you are writing about. Gratias vobis ago.”

But BusyLizzieBe wrote: “Youngsters’ disconnect from the natural world is deeper than I ever imagined and deeply disconcerting. In a volunteer situation, I have even encountered children who have never seen a caterpillar or a butterfly.”

Sue Peterson of California sent an email: “This past weekend, we went camping with friends, and there was quite a bit of concern about being able to identify poison oak. It was funny, because everyone had a slightly different identifying factor (rounded leaves, how many leaves on a stem, spots on the plant, etc.) and no plant we found seemed to have them ALL, but they would always have a few.”

She and others suggested using Google’s image recognition feature. “They are not exact, but it was fun to see the other plants that look so much like the plant I had found, but were slightly different, and learning the technical names and nicknames of different plants was fun.”

This week’s challenge: Whether it’s a full 24 hours outside or 18 holes of windmills and dinosaurs, why not let your children pick a summer moment? Tell us what they chose, and how it goes (and don’t forget to ask them what they thought, too), by commenting here or emailing us at wellfamily@nytimes.com before next Tuesday, Aug. 2. Were they more creative than you expected, or did they suggest an idea from summers past that you’d forgotten?

We’ll share reader stories and post next week’s challenge on Thursday, Aug. 4. The real goal, as always: to savor the summer all season long.