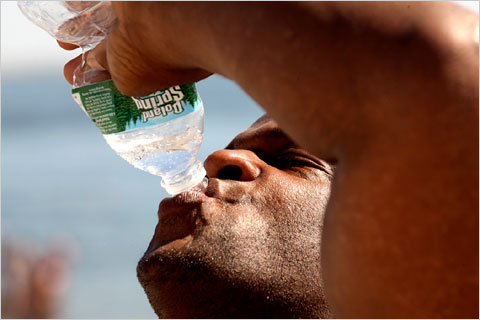 Spotting a marathon runner’s car in the parking lot can be easy — vanity plates aside: Sub3Hr, Brn2Run.

“Look for the water bottle on the bumper,” said Peter Krebs, a New York Road Runners consultant and photographer.

How much fluid do runners really need on long runs? And just as important, how do they manage to get it?

The water bottle is a critical companion for any marathoner in training, who must endure long runs of 15 miles or longer. But for many, the logistics of staying hydrated for two, three or four hours can be as challenging as the run itself.

The answer — like mostly everything in this sport — depends on the individual runner. Medical guidelines for distance runners have been changing to take into account the wide varieties of body types, climates and sweat rates in a field of recreational runners that is growing every day.

The International Marathon Medical Directors Association’s most recent guidelines recommend that runners de-emphasize numbers and formulas and use one principle. “Train yourself to drink to thirst,” said Dr. Lewis Maharam, the medical director for the New York City Marathon.

The guideline is based on research conducted by Dr. Timothy Noakes, an exercise physiologist at the University of Cape Town in South Africa. Drinking when thirsty is supposed to discourage over-hydrating, which can lead to hyponatremia, and prevent dehydration.

“There is no good scientific research that says you need to drink as much as you sweat to be healthy,” Dr. Maharam added. “Everybody has different fluid needs, everybody is a different experiment unto themselves.”

During long runs, the medical association recommends that runners drink a sports drink, and not just water, after 30 minutes. “Find out what drink is going to be on the course during your race, whether it’s Gatorade or Powerade, since you need to be training with whatever the official drink is,” Dr. Maharam said.

Some runners go even further with their sports drink-specific research.

Tom Burns, of Buffalo, runs a 1.5-mile loop near the Frederick Law Olmsted-designed botanical gardens. “I buy a sports drink or water bottles that match the floral display of the season,” he explained in an e-mail, using red Powerade for longer runs or a red water bottle for shorter runs, for example, during geranium season. “I drop it in that patch of flowers on my first lap — it blends right in.”

Rituals like his are repeated across the globe in the evenings and mornings before long runs, when men and women drive about stashing their bottles at strategic locations and intervals — along country lanes, beneath mailboxes, in bushes or under bridges.

Beware the urban stash and dash, though. Some runners in New York’s Central Park have been known to hide bottles near landmarks like the Fred Lebow statue, only to find them plundered, a particular problem during winter when the water fountains are shut off. Mr. Krebs once stashed his lemon-lime sports drink on the Triborough Bridge, then fretted for half his run that someone might have tampered with it. Fortunately, nobody had.

Michael Markes, of Midland, Mich., found creative places to hide his 20-ounce bottles of water when he was training for his first marathon in 2006 along farm runs.

“I would stash them along the shoulder of the road in the higher weeds near a prominent landmark like a certain telephone pole or a sign post, where I would know where they were and so they would not be visible by people passing by,” Mr. Markes said.

But ultimately, he said, that took too much planning. This year, as he trains for the Detroit Marathon, he brings three $1 bills with him and stops at gas stations to buy water, ingest his gel and use the bathroom.

Joe Pautler of Cheektowaga, N.Y., recalled how he usually relied on a vending machine on a bike path. “Until one 95-degree day when I got to the turn-around point and found the vending machine out-of-order! That was a bad day,” he wrote.

Now he uses his front porch as an aid station stocked with water and gels, running loops of one, three, four and five miles around his neighborhood. When traveling, he employs a waist belt, the Ultimate Direction, which holds a 20-ounce bottle horizontally on his lower back.

“It feels cumbersome at first, but I got used to it pretty quickly, and it does the job of meeting my hydration needs,” he said.

There is the fuel belt that looks more like a tool belt, holding four small bottles positioned on the hip, though the plastic can make the water taste industrial. “But the longer you run, the less you care about the taste,” wrote Kate Ledger of St. Paul, Minn.

It’s much more freeing to have someone else carry the fluids.

In Jefferson City, Mo., Karen Wisch and her running partners used to go out in the early morning and place their bottles on the Katy Trail. One day a friend volunteered to ride his bike and carry water and Gatorade in a camelback.

“That was the best day of our lives — and the worst for my spouse,” Ms. Wisch wrote. “He and a very good friend now ride with us carrying our supplies. They often brave sub-20-degree temperatures at an eight-mile-per hour pace so that we no longer have to spend an extra hour dropping off and picking up our drink bottles.”

For those runners who have no such support, they use the parked car as their aid station, placing bottles on the hood, behind tires and near the license plate. Drnk2Win, anybody?