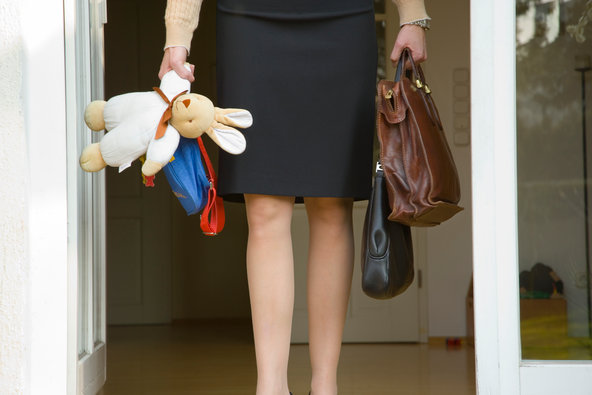 “Let’s take some time off.” That’s how Susan Corvino of Pasadena, Calif., remembers her husband’s reaction when her communications job was eliminated four years ago. At the time, her husband was working long hours, so they agreed she would stay home with their three young children.

But returning to work two years later when her youngest daughter began preschool wasn’t so easy. Interviews in her field led nowhere, particularly when she asked for a flexible schedule.

So she tried a different approach, thinking less like a midlife professional, and more like a midlife intern. Creating her own series of “returnships,” Ms. Corvino took on a project for a friend who ran a non-profit. Later she found a temporary contract position at a university. These stints helped her find her current role in communications and development for an independent school.

Those short-term roles “bolster your résumé,” she said. “Everyone says, ‘Oh, do some volunteer work,’ and I did that, but it really helped to have some paid gigs.”

Ms. Corvino is not alone. Nearly one-third of college-educated women have taken time off to serve as caregivers to children or aging family members, according to an analysis by the Center for Talent Innovation. The majority of these workers are women, and while most of them plan to return to work eventually, they often find it difficult to navigate their way back into the work force.

In March, the data solutions provider Return Path announced it will spin off its own 20-week paid “returnship” program into a nonprofit, Path Forward, which works to help companies create similar programs. A new website, Après, just this week began targeting workers like Ms. Corvino who have taken career breaks in hopes of matching them with employers. And last year, the Society for Women Engineers announced the STEM Re-Entry Task Force, which worked with seven companies to create mid-career internships for 2015 and 2016, with plans to expand. The OnRamp Fellowship for legal and financial program offers similar opportunities at JPMorgan, Baker Botts, Amazon, Credit Suisse and Goldman Sachs, which pioneered (and even trademarked) the “returnship” in 2008.

Returning professionals have something unique to offer the employer who understands their value, said Carol Fishman Cohen, the chief executive and co-founder of iRelaunch, which works with both professionals seeking to return to work after a hiatus and employers interested in hiring them. While they’re often as eager as the just-out-of-college new hire, they bring more workplace experience, and they often have moved past the stage of needing future career breaks, unlike their younger counterparts.

“These are experienced employees, but also fast learners who are really ready to prove themselves,” Ms. Cohen said.

The Après site aims to connect experienced but out-of-the-work-force employees with employers who are looking for both gender diversity and seasoned mid-career professionals. In addition to traditional positions, it offers options that can help people transition back to work including contract consulting projects, temporary jobs and unpaid pro bono work.

The site was co-founded by Jennifer Gefsky, former deputy general counsel for Major League Baseball, who struggled to return to work after an eight-year career break, and Niccole Kroll, who had left her job as a New York University dietitian and researcher. Both had stepped out of the work force to raise their children.

“We were both surrounded by all these friends in that same category — educated, previously successful women looking to re-enter the work force — and no one knowing how to do it,” Ms. Gefsky said. “Then there were all these companies worried that their mid- and senior-level executives were all men.”

One advantage of working with a company with a returnship-style program, or one that has otherwise expressed an interest in welcoming caregivers back to the workforce, is that those companies are effectively saying, “we know we are going to see résumés with a gap and we’re O.K. with that,” Ms. Gefsky said. These are companies that understand that there are many reasons, economic and personal, for stepping out of the work force — and for returning. “Some women are financially motivated, and some are personally motivated, and both make good employees,” she said.

Workers who can’t find a formal midlife internship can still create their own internship-style path back to work. Erin Gibson Allen, a lawyer in Pittsburgh, created an unpaid internship with Judge Lisa Lenihan, a magistrate judge for the United States District Court in the Western District of Pennsylvania. After spending six months looking to re-enter the legal profession and with no formal re-entry programs in Pittsburgh, her plan was to get work experience and network in the legal community, rather than to find permanent employment with her judicial boss.

Her efforts paid of: After nine months with the judge she accepted a job at a law firm, and then moved to a Pittsburgh firm, Marcus & Shapira, where she now works in the area of competition law. She chose her internship experience wisely: Ms. Allen said the judge, a mother herself, appreciated the challenges of managing both a family and a legal career.

“The judge was my biggest advocate,” she said. “She introduced me to attorneys around town and included me in as many legal events as possible. My time with her was priceless.”

Helen Wolter of Mountain View, Calif, describes her career path before having children as “typical liberal arts major.” She taught high school, she did outdoor education, she worked in film and video. When her son was born, she was a high school social studies teacher. She made it work for a year, but went through “three nannies and a day care” trying to find an affordable and flexible fit.

Ms. Wolter began her journey back to work by pursing a master’s degree in public administration. To keep it affordable, avoid the need to hire babysitters in order to attend classes and maintain the flexibility she needed, she completed an online program through the University of Colorado. Now a graduate, with a son in first grade, she’s taken an internship approach – opting for a six-month contract position with a political re-election campaign as her first job after seven years as a caregiver. She hopes it will lead to permanent work. “I checked with a career counselor to ask if I should take that, or wait for something more permanent, and she told me, ‘grab it.’ said Ms. Wolter. “It’s so much easier to find a job if you have a job.’”

How do you create your own midlife internship? Those returning to work without the benefit of an organized program can use such internships as a model for both how they approach and talk to potential employers, look for the support they need, and find ways to expand their skills. Career counselors offer the following advice.

Keep networking from home: Even if your focus is on caregiving, you can still keep in touch with former bosses and coworkers. You might connect with someone on a soccer field who can help you. And you can revive a connection even if you’ve let links slide, said Cheryl Casone, author of “The Comeback: How Today’s Moms Reenter the Workplace Successfully.” “Comment on Facebook posts, send an interesting article, reconnect first,” she said.

Don’t shy away from a temporary job: These can be “win-win,” said Ms. Gefsky. “Say, ‘let’s try this. I want to brush up my résumé, and I’ll work for a trial period at something less than the market rate.’ Or take something knowing it’s temporary in order to gain experience and add to your résumé.”

Own your career break: Own your choices, and emphasize your readiness to return. “Don’t be afraid to say you wanted, or needed, to be home with your family,” said Ms. Gefsky. “This is only going to become more common, and employers are becoming more and more used to it.”