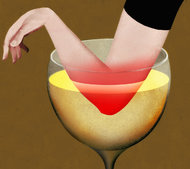 My elbow is killing me.

I mean that quite literally. Yes, it hurts, but it is also destroying me, the me as I was without a bad elbow, a happily balanced collection of parts all working modestly, silently, efficiently toward a common good. Kidneys, liver, knees, elbows — what a great team we were. I put my hands in my pockets without wincing, typed without thinking, sat at work judiciously evaluating everyone else’s distress.

My elbow is erasing all those iterations of me.

It’s a common problem: extensor tendinitis, otherwise known as tennis elbow. I do not play tennis; my mistake was painting two dozen bookcases all by myself a few years ago. The back and forth of brush and roller apparently tore enough fibers in my tendon that almost anything makes the left elbow throb now — leaning on it, twisting it, sleeping one degree off the angle it prefers, the little tyrant.

I am ruled by my elbow. The days it feels good are rare and happy. Otherwise, it is my constant companion, whimpering and tugging at my sleeve.

At work, we are in the middle of a giant paradigm shift in pain treatment. I listen to the plaints of patients trapped in the new normal. Some past doctor, in the spirit of times gone by, once decided to eradicate their pain with whatever it took. Now I am supposed to remove them from the substantial quantity of opioids that, apparently, was what it took.

“Nothing else works!” they scream. “My back (or neck or leg) is killing me!”

Meanwhile, the elbow and I struggle on. No opioids for me, not now or ever. I never liked those drugs, have never taken them, and prescribed them sparingly even back in the day.

But I do understand the vagaries of pain treatment. Anti-inflammatories like naproxen and ibuprofen might as well be cornflakes, for all the good they do my elbow. Tylenol is remarkably effective, but a steady diet can’t be healthy, so I try to be sparing.

The counterirritant capsaicin cream is oddly helpful too, replacing that gnawing ache with a superficial burn that is far easier to ignore.

But the hands-down single best treatment for my elbow is a drink. One large glass of wine, and the pain vanishes. Then I am myself again, whole and unencumbered as the elbow sleeps peacefully by my side.

Were I a manual laborer, I would have headed for steroid injections or surgery long ago. Were I less risk-averse, I’d be heading there right now. Were I genetically predisposed or cursed with a lower pain threshold, I might have just a smidgen of an alcohol problem.

And were I a different socioeconomic version of myself, I suspect that my Tylenol might be Percocet and my alcohol might be heroin, and at this very moment, I would be screaming at some poor doctor that nothing else works.

Medical fashions change all the time. Rarely has the U-turn been as tight as it has been with pain control.

First we were zooming along in one direction: “When Will Adequate Pain Treatment Be the Norm?” a 1995 editorial in The Journal of the American Medical Association demanded. Now we are inching along in the opposite way: “Zero Pain is Not the Goal,” an editorial published in the same journal last month affirmed.

Unfortunately, none of this knowledge has translated into new treatments. We have the usual handful of alternatives, often just so many cornflakes to the opioid-experienced. Nonpharmaceutical approaches to pain treatment (Exercise! Stretch! Be mindful!) generally just don’t fly.

I suspect neither the pain control mantras of the 1990s nor the ones I hear today are entirely true. No, we cannot eradicate all pain, nor should we try.

But yes, it is possible for some people to live normal, law-abiding lives on long-term opioids for pain control.

We are now being expertly assisted in the responsible prescribing of opioids with a flurry of new guidelines. So far, none of them has been particularly helpful as we try to distinguish among patients who are physically dependent on the drugs, those who are financially dependent on the proceeds from selling the drugs, and those who just need something for when the pain gets bad.

Not to mention those who are two of the above, or all three.

The elbow has been just about as unhelpful as the guidelines in these adjudications.

“Cornflakes!” it will snort on occasion. “Why don’t you give that poor fellow sufferer something that will actually work?” But it also continually, smugly, silently demonstrates that a person can live a normal, fully functional life with incompletely treated pain.

That accursed elbow is always introducing some nagging doubt into everything I might otherwise be happy to believe. As I said, it is killing me.