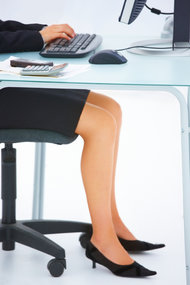 Sitting too much may increase the risk of dying prematurely, while replacing sitting time with just standing or moderate physical activity could counteract the effect.

Researchers used survey data from 54 countries, analyzing time spent sitting more than three hours a day along with data on population size, actuarial tables and overall deaths. The study is in the American Journal of Preventive Medicine.

More than 60 percent of people worldwide spend more than three hours a day sitting down, and the researchers calculated that sitting time contributed to some 433,000 deaths from 2002 through 2011.

They estimated mean sitting time across countries at 4.7 hours a day. Reducing that time by 50 percent, they calculated, would result in a 2.3 percent decline in all-cause mortality.

The association between time spent sitting and mortality has been found in other studies, and the link persists even after accounting for other physical exercise.

“This is the best data we have for now,” said the lead author, Leandro Rezende, a doctoral candidate at the University of São Paulo School of Medicine, “but we don’t know if it’s a causal relationship.

“There are things we can do,” he continued. “Stand up, and go have a drink of water instead of keeping the water bottle at your desk. Or just stand up every so often. Standing alone increases your energy expenditure.”