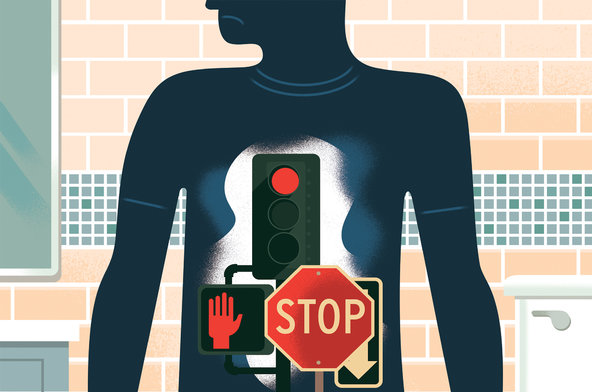 Chronic constipation is an all-too-common problem rarely discussed in polite company and only reluctantly mentioned to doctors during checkups. Although it accounts for eight million doctor visits annually, only “a minority of those with constipation seek medical attention,” Dr. Arnold Wald, a leading expert on the problem, reports.

Yet this hesitance can perpetuate mistaken beliefs about its consequences, causes and treatment, and often results in failure to get effective relief. Most of the time, relatively simple treatments prove adequate. Even more complex cases, like those that involve a disorder of muscle action in the pelvis, usually respond well to currently available remedies.

Chronic constipation can accompany a long list of medical problems – mechanical ones like a stricture or tumor; neurological disorders like Parkinson’s disease or multiple sclerosis; or metabolic conditions like severe low thyroid or low blood levels of magnesium.

Constipation can also be a side effect of medications, especially opiates like Percocet and OxyContin, as well as some antidepressants, anticonvulsants and antihistamines.

As someone who has dealt with constipation, with varying degrees of success, for most of my life, I had more than an academic interest in learning more about it. Hence this column, prompted by a friend’s excruciatingly painful problem that seemed to emerge from nowhere and by a new review of studies on the topic published in JAMA by Dr. Wald, a gastroenterologist at the University of Wisconsin School of Medicine and Public Health.

Many strongly held beliefs about constipation are not based on medical evidence, Dr. Wald and his colleagues have noted.

One of the oldest yet most persistent of these unsubstantiated notions is that failure to empty one’s bowels each and every day can result in so-called autointoxication – the absorption of poisonous substances produced from partially digested food and food byproducts in the intestines. Through the years, autointoxication has been erroneously blamed for a host of ailments, including high blood pressure, arthritis, atherosclerosis, gall bladder disease, various cancers and skin disorders.

Autointoxication is often cited as a reason for the common but mistaken belief that a daily bowel movement is essential to good health. But there’s no evidence that food that sits in the intestine leads to the buildup of toxins. The medically accepted definition of constipation is “fewer than three bowel movements a week, or hard, dry and small bowel movements that are painful or difficult to pass,” often resulting in abdominal pain or bloating.

Unfortunately, as a college freshman, I met those criteria. An astute physician provided advice that has helped to minimize the problem ever since. She gave me a list of “constipating” foods to avoid – white rice and other refined grains, unripe bananas, tea, cheese and chocolate – and even more important, foods to eat regularly: beans, whole grain cereals (especially bran) and breads, vegetables, fruits (especially dried fruits) and nuts. Eating more of these and other high-fiber foods can be very effective in curbing constipation. And she recommended drinking a full glass of water before bed to help soften the stool and another after awakening to stimulate my bowel.

Following this advice I’ve never had to rely on laxatives, although those medications are associated as well with myths and misconceptions that are important to dispel. One mistaken belief Dr. Wald and others have cited is that long-term use of stimulatory laxatives like senna and bisacodyl (Senokot and Dulcolax, respectively) can impair normal function of the colon and cause dependency on the medication.

While it is true that using stimulatory laxatives for many years at more than a dozen times the suggested dosage can damage the colon’s nerves and muscles, Dr. Wald and others say that properly designed studies of these laxatives have shown no harm to the colon when they are taken in recommended amounts.

Yet many doctors still warn – inappropriately, Dr. Wald says — against taking stimulatory laxatives for more than a few days. Indeed, the website FamilyDoctor.org states, “When these laxatives are taken for a long time, the bowel can lose its muscle tone and ‘forget’ how to push the stool out on its own.” Best to forget this outdated idea as long as you stick to the recommended dose if you must take these products.

Short of potent laxatives, other milder remedies often prove helpful. One is exercise, the more vigorously done the better. Another is to establish a regular bathroom time and respond promptly to the urge to defecate. I am among many who have found that a large cup of hot coffee in the morning is often a very effective stimulus.

However, as my ability to prevent constipation has diminished with age, I’ve added two other over-the-counter aids: a daily soluble fiber supplement of psyllium dissolved in juice or water (other fiber products like methyl cellulose, calcium polycarbophil and wheat dextrin can also be effective) and a twice-daily dose of a stool softener, both of which can safely be used indefinitely.

However good dietary fiber normally is for maintaining a healthy gut, it can be harmful when the cause of constipation is muscle weakness or a nerve problem, Dr. Wald said. Such patients often do better by eating less fiber and instead taking a secretory drug like lubiprostone (Amitiza) or linaclotide (Linzess) that adds water to the colon and softens the stool.

Sometimes, too, standard remedies for chronic constipation are ineffective. None worked for my friend, a New Yorker who suddenly developed an extremely painful problem at age 73 that was finally diagnosed as a failure of her pelvic floor muscles to relax when they are supposed to and allow the stool to pass through. Instead of relaxing, the muscles around the rectum contract. “It is a learned unconscious act that can be unlearned,” Dr. Wald explained.

Despite the usual remedies of diet, exercise and a costly prescription-only stool softener, the problem has recurred every eight days or so, she said. She is now being treated with deep breathing exercises 10 times a day and abdominal massage above the colon twice a day, and has begun biofeedback to “retrain” the muscles that are responsible for normal colorectal action. Dr. Wald said that biofeedback training, when done properly, is effective in about 80 percent of cases.

My friend’s experience underscores the importance of consulting an expert when constipation persists and fails to respond adequately to self-help measures of diet, exercise and over-the-counter remedies.

st dosing oneself prematurely with widely touted substances like resveratrol, the antioxidant found in red grapes and wine, or growth hormone.

Consumers must exercise caution, he warned, because “there’s an entire industry out there trying to market the products we’re testing before they are adequately evaluated.”

He also emphasized that taking a drug found to ward off age-related ills is not a license to abandon a healthy lifestyle. Doing so “could completely negate the benefit of a compound that slows aging,” he said.