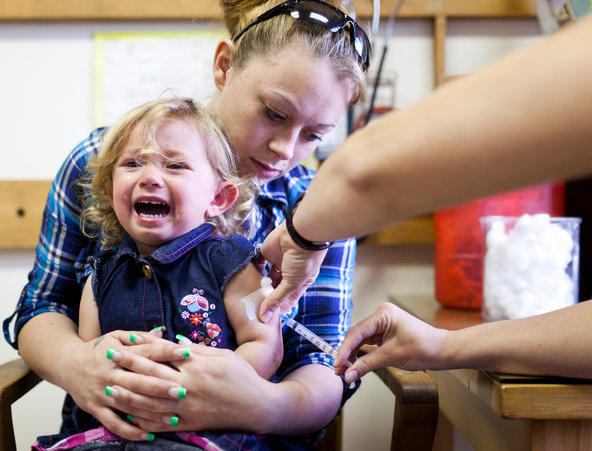 Parents who don’t want to vaccinate their children are a perennial sore subject in my profession. The question bubbled up again this spring at the American Academy of Pediatrics’ Annual Leadership Forum, where academy leaders vote on issues of concern to pediatricians across the country.

Two of the top three resolutions this year were about vaccine refusal. One requested a policy statement calling for the elimination of nonmedical exemptions to the requirement that children be immunized to attend school and day care. The other asked the academy to support “pediatricians who decide to discharge patients after a reasonable, finite amount of time working with parents who refuse to immunize their children according to the recommended schedule, or who fail to abide by an agreed-upon, recommended catch-up schedule.”

Let me tell you about two cases of pertussis — whooping cough — from about 15 years ago. The first one is my own, probably caught from a sick kid, back before the development of the adult booster shot; thanks to an astute colleague, I got the diagnosis, and we began the wearisome task of contacting the families of every child I had seen in the clinic or the newborn nursery during my infectious days to inform them of the possible exposure.

I didn’t give it to him, but the second case was a preschool-age patient of mine whose mother had refused vaccination, insisting that she wanted to wait on the vaccine that protects against pertussis. It wasn’t a terribly dangerous case of whooping cough; the patient’s airway wasn’t compromised, the way infants’ airways often are, but he was pretty sick and pretty miserable for a good long time. As was I; we treat pertussis with antibiotics, which make the sick person noninfectious, but the cough, which is severe enough to cause rib fractures in some unfortunate patients, can persist for six weeks or more.

I felt guilty that I had failed to diagnose the illness in myself promptly enough. I felt a different guilt about my patient, wretchedly certain that if I had only been more eloquent and more persuasive, his mother would have come around to the idea of vaccination and he would have been spared the coughing paroxysms that convulsed his little body, often followed by vomiting.

I tell you this to help explain the way that pediatricians feel about immunizations.

The resolution about “discharging” nonvaccinating families was introduced by Dr. Kimberly Avila Edwards, a pediatrician in general practice in Kyle, Tex., with a large multispecialty group that serves the Austin area. Some of their offices were seeing increasing numbers of parents who refused vaccination, and the physicians were struggling with how to care for those families. And she said parents who do vaccinate and were worried about possible exposures to diseases in the waiting room “were asking, ‘Do you accept nonvaccinators, because if so, we don’t want to come here.’” The biggest waiting room fear is that babies too young to be fully immunized might be exposed to preventable illnesses like whooping cough, measles, and influenza.

The doctors discussed the question, she said, reading the current A.A.P. policy, which seemed to them to discourage doctors from discharging these patients, and then decided to make a new practice rule. “We are going to give families a finite amount of time for a parent to say, O.K., I am going to start vaccinating my child and adhere to the catch-up schedule,” she said. “If parents still choose not to vaccinate, we are unfortunately not going to be able to continue to see you.”

This is a strategy for private practices, where families have some choice about which doctors to patronize; “safety net” clinics, like the one where I practice, which serve poor children, cannot “exclude” families in this way. And studies have shown that in this country, those who don’t vaccinate tend to be affluent, white and suburban.

Even if they have the choice, should we be steering nonvaccinating families toward health care settings that may not push as hard to change their minds? Dr. Carol Baker, an expert in pediatric infectious diseases and a professor of pediatrics at Baylor College of Medicine, thinks the academy should not change its existing position. Doctors are reacting negatively to the time and effort that these families consume, she told me, and the fear of being sued if a dangerous disease is passed along in their waiting room.

Even so, she said, doctors have to keep talking to the parents, and trying to get the children vaccinated. “For the academy to give permission that you don’t have to try is an ethically poor position,” she said.

Although the resolution met with general approval at the meeting, there was opposition from some bioethicists present. Dr. John Lantos, a pediatrician who is the director of the Children’s Mercy Bioethics Center in Kansas City, argued that the current A.A.P. statement strikes the correct balance in encouraging pediatricians to keep talking to “vaccine hesitant” parents: “Try hard to work with people.”

Dr. Avila Edwards said that the new rule at her practice that gives families a finite time period to consider vaccination led to “respectful one-on-one discussions,” which often ended up with families making the decision to vaccinate and stay.

Dr. Lantos argued that doctors are saying that this is a question of beliefs so fundamentally divergent that it’s impossible to work together, as if “vaccines are an order of magnitude higher than anything else.” Parents may choose to disregard other pediatric guidelines — smoking in the home, not applying sufficient sunblock — without being asked to leave a practice. The medical obligation is to educate parents, to try to get them to do the right thing for their children, not to give up on them.

If the worry is other children’s being exposed in the waiting room, he said, doctors could focus on measures to keep sick kids separate, or out of the waiting room until a doctor is available. “And if your concern is that these infected kids are going to go out and infect other kids — if you fire them from your practice, there would be more unimmunized kids in the world,” he said, since the hope is that if the families stay in the practice, eventually they may be persuaded. “Most people don’t say, nobody should see these kids; they just say, my practice shouldn’t see these kids. But if everybody said it, the world would be a much worse place.”

Most pediatricians have seen at least some of the diseases that vaccines protect against, from whooping cough to meningitis to the really bad cases of influenza and rotavirus. The children who aren’t protected worry us, because they make us feel we aren’t doing our job of keeping them safe in a world that is a much better and safer place to grow up — because of vaccines.