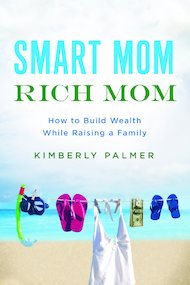 “Daddy has to work! You have to come pick us up!”

When Kimberly Palmer heard those words come out of the mouth of her 5-year-old daughter, she was dumbfounded. Both she and her husband have full-time jobs, so where had the little girl gotten the idea that Daddy’s work mattered more?

Ms. Palmer didn’t know, but she took it as a call to action. Although she’s written about the topic of money management for a living for many years, she wasn’t handling many of the money management tasks in her own household.

So her advice for heterosexual women in two-parent households in her coming book, “Smart Mom, Rich Mom,” is this: Moms should be in charge of the management of household finances. All of them. Always.

Many couples will bristle at the idea that any family task other than breast-feeding should be assigned on the basis of anatomy, even if they are often self-selecting in this manner by choice.

In many households, men tend to manage family investments and taxes, and women, if they get involved in money issues, tend to focus only on everyday expenses and charitable donations.

A 2014 UBS Wealth Management Americas report noted that when it comes to investing, however, it’s men making the decisions alone half the time. Another 37 percent of couples shared the decisions, while just 13 percent of women made them alone. Among younger women, just 15 percent of millennials and 18 percent of Generation Xers were flying solo.

Same-sex couples often have separate accounts and make individual decisions, which is probably a legacy of the fact that it was hard for them to marry and combine accounts until recently.

One reason men may handle investing more often is that they tend to come into a marriage with more assets. A 2014 Wells Fargo study of millennials reported that the males had both a higher median household income ($83,000 vs. $63,000 for women) and higher median assets that were available for investing ($59,000 vs. $31,000).

Or perhaps men simply like handling this task more. Does it really make sense to take it away from them? Ms. Palmer pushes back against concerns over prescribed gender roles in three ways.

First, women tend to be better investors. Studies have shown that men have a bit too much confidence and take a bit too much risk. One seminal piece of research in this area showed how badly men’s investment returns suffered because they traded their stocks too often. A 2015 book called “Women of the Street: Why Female Money Managers Generate Superior Returns (and How You Can Too)” sums up the case for those who want to know more — or slip a treatise under their husband’s pillow.

Second, when mothers are the money leaders in the household, children take notice. For years, surveys of families have found that parents talk to girls less often about money than they talk to boys and that teenage boys end up believing they will earn more. Ms. Palmer clearly didn’t much enjoy finding out that her daughter viewed her as a driver and her dad as an earner. Moms who manage the money serve as role models who can counteract some of these problems.

Finally, many women will have to be in charge of the money sooner or later, so having some experience as the primary household money manager is essential. Women outlive men, and there are about four times as many widows as widowers in the United States, according to Ms. Palmer’s research. All of us who toil in the personal finance salt mines hear stories of widows who had to start reassembling their financial lives from scratch when their husbands died suddenly. When you are sad and older, you do not want to find yourself locked out of the household accounts, literally.

Divorce happens, too, so it’s good for both spouses to know where the money is (and if it’s been moved around recently) in the event of a surprise separation.

While Ms. Palmer wants women to be the financial captains of the family, she is not advocating a dictatorship. A couple’s financial discussions should be collaborative, whether the person executing the decisions is male or female. So you sit down at least once a year and remind yourselves of the answers to the following questions: Where is our money now? How do we get to it? Has our willingness to take risks with our investments changed? What are the most important goals for the next year? And what do we want to change?

Reading “Smart Mom, Rich Mom” made me acutely uncomfortable, precisely because I could not shake the feeling that I was doing it wrong. At the very least, my wife should be making all the moves for 12 months at a time, once every few years.

As for Ms. Palmer, she now has the password to the Excel spreadsheet her husband made that contains all of their financial information. And she’s started bringing her wallet along most everywhere she goes, even if it is a bit bulky.

That way, she hopes, her daughter will understand that her mom is just as invested in the money that gets made and spent in their family as her father is.