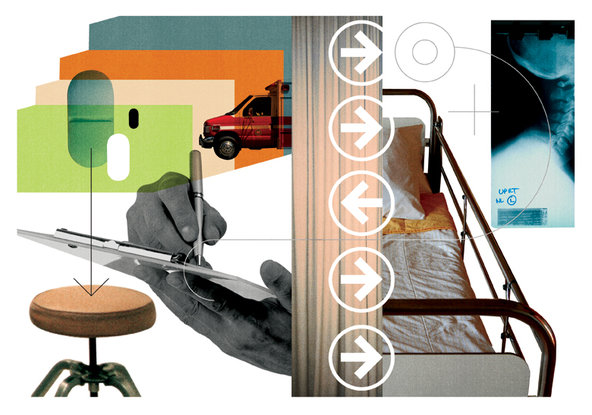 A couple of months ago, a patient well known to the emergency room where I work came in requesting his usual cocktail of narcotic pain medications. It was early Saturday morning, before the usual bustle of patients had begun, and I had some time.

The patient was well documented in the electronic medical record for his frequent emergency room visits for painkillers. To further confirm, I called his pharmacy, and as soon as the pharmacist heard the patient’s name, he sighed loudly, said he knew him well, and began listing the litany of different doctors and hospitals from which the patient had gotten narcotic painkillers.

I then sat down with the patient for a good 25 minutes — a considerably long time in a busy, urban emergency room— and explained why I could not give him what he wanted. It was clearly stated in his medical record that he had an extensive history of opioid abuse, and the shopping-around for prescriptions, as suggested by his pharmacy, further validated that. I knew if I waved him off with another supply of painkillers, I would only perpetuate his addiction problem.

He protested loudly and repeatedly said, “I don’t know why you can’t be like all the other docs and just give me the drugs. Everybody does it.” Finally, realizing that he would not get what he wanted, he stormed out after shouting at me: “If you doctors don’t want me taking the drugs, why’d you all give me all those pills after my surgery last year?”

Patients like him are not uncommon in the emergency room. A 2014 study confirmed that from 2001 to 2010, the percentage of emergency room visits during which opioids were prescribed jumped by 10 percent. My patient’s story stuck with me because I was actually able to spend time counseling him instead of caving to his request — and because he had the insight to know that his addiction started with a doctor’s prescription.

The opioid epidemic is explosive, and laws are being passed to address the problem. Two-thirds of emergency room visits involving overdoses are due to prescription drugs. The highest number of deaths caused by opioid painkillers was in 2014. The data for 2015 has yet to be released.

But, as one of my colleagues whom I greatly respect said to me in the emergency room recently: “Why wouldn’t I give patients a Percocet prescription? It makes their life easier and my life easier.” Another colleague overhead this and wholeheartedly agreed, speaking truth to the fact that the system is set up so that refusing these demands is much more difficult and time-consuming than it is to simply give in to them.

I know it, too. I’ve had patients seeking painkiller prescriptions who kept the hospital administrator’s number in their cellphones and have called pre-emptively before I’ve even had a chance to talk to them. I’ve had patients who’ve had tremendous outbursts in the emergency room, completely disrupting care and taking up the time and attention of many of the hospital staff members, often to the detriment of other patients. This sometimes results in my colleagues asking if I could simply prescribe a couple of pills so the patients would leave.

Several years ago, I even had a patient formalize a letter of complaint to the state health department that I did not give her the opioids she requested. At the very least, I have to worry about patient satisfaction scores, which have come to be valued ever more greatly as they’re now linked to Medicare reimbursements. For individual physicians, low scores may result in a slap on the wrist or decreased pay or, in extreme cases, even be grounds for dismissal.

I appreciate that new safeguards are being implemented. In New York State, where I now work, a higher-level electronic prescribing system is rolling out to closely track and protect against narcotic painkiller over-prescribing; my colleagues and I all went through the training process and are mandated to start the new system on March 27. Under the new system, only digital prescriptions that are electronically transmitted to the pharmacy are allowed, and if a physician wants to prescribe a narcotic painkiller, an additional security verification step is required. In Massachusetts, where I used to work, a law was passed to limit narcotic prescribing to a seven-day supply after a surgery or injury.

But the truth is, a deep cultural shift within our health care system is needed. Physicians need to know that if they don’t prescribe a narcotic because it’s not clinically indicated, or worse yet, because the patient already has an addiction problem, that they have the backing of administrators at every level, from their own department to the head of the hospital all the way up to state officials. If patients are seeking narcotics and have a documented history of doing so — and become combative or refuse to leave after discharge — they may need to be escorted out of the emergency room by security and their treatment terminated to avoid interrupting the care of other patients.

What my patient said to me that Saturday morning is right: We health care providers created the problem. Now it’s up to us to take steps to try to solve it. Beyond these new prescribing laws, on-site drug counseling ought to be in place. Drug rehabiliation programs need to be expanded, and dedicated staff should be available in the emergency room to enroll patients into them directly. But it begins with doctors not jumping immediately to prescribe narcotic painkillers — and a health care system that allows them to say no.

Helen Ouyang is an emergency physician at NewYork-Presbyterian Hospital and an assistant professor of medicine at Columbia University.