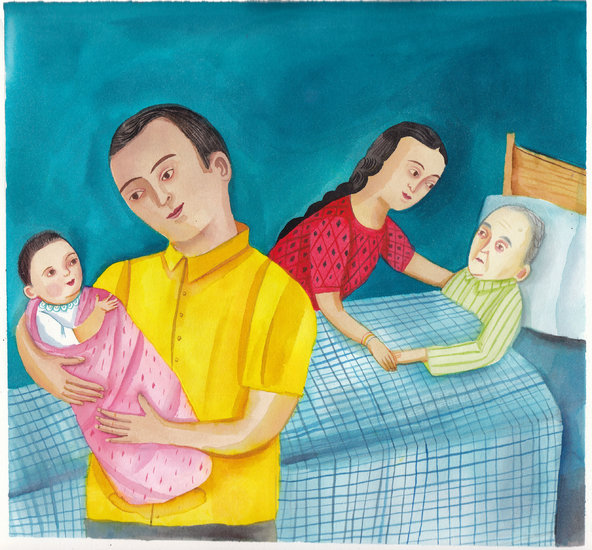 Like many new fathers, I spend as much of my free time as I can get away with gazing into my baby daughter’s eyes as she stutters and scans. I remember a day not long ago when I rocked my daughter, Eva, in my arms, and her eyes stopped and steadied as they looked back into mine. Her arms and legs ceased to rock and her entire body just relaxed. A chill went down my spine.

I felt that for the first time, she had really seen me. She was about 3 months old at the time. Within moments, though, her eyes left mine and started whirring around in their sockets again. While this was the first time I had shared such a moment of joy coupled with disappointment with her, I had experienced this many times with patients at the end of life.

Many have alluded to the symmetry of the beginning and the end of life. Most people, however, become parents long before they become caregivers. For me the order was reversed. For while I only recently became a father, medical training has made me much better acquainted with those at the opposite end of the spectrum.

The agony of death is more than just physical – it is an existential wound that gnaws away until there is slow, and frequently unwilling, acceptance of the inevitability of one’s mortality. I sometimes see a similar pain in my baby girl’s eyes as she makes another arduous journey – learning how to be alive. Frequently, as she cries when she is hungry, or cries when she is overfed, or cries as she tries to have a bowel movement, or just cries, it seems as if she is yearning to go back to the simple comforts of her mother’s womb.

Changes in the medical system have brought the medicalization of the shallow slopes of our bell-curve-shaped lives. At the start of the century, most lives started and ended at home. However, while hospitals started to become the place where we took both our first breaths and our last in the 20th century, in recent years people have become eager to reverse both trends. Nutrition, too, has shifted from being completely natural, to being almost exclusively artificial formula for children and tube feeding and intravenous nutrition for the terminally ill, followed now by a realization that natural routes are best for both groups. What hasn’t changed, and what binds the pediatric and the geriatric, is the obsession with their bowel movements.

As medical science has progressed, while we have extended life, we have transformed death from a singular event, into dying, an entire phase of our lives that can last from days to years. This is mirrored by an extension of childhood as well, with children being more dependent for a longer period of time than ever before in human history. Parenting therefore has become more demanding – and more expensive.

Caregiving for those at the end of life, as those who live it will attest, is equally arduous yet is barely recognized at a similar scale. In some ways, caregiving is similar to parenting – women do most of the heavy lifting. In fact, two-thirds of all caregivers are female. Yet, caregiving for the dying is different from parenting because it does not yet have a formally recognized role within the care of the patient. While there is no chance Eva would ever see her pediatrician without her parents, elderly patients, some with levels of dependency equal to that of a 3-month-old, present to the hospital or clinic all by themselves, all the time. Furthermore, while there is much debate about paying workers through maternity or paternity leave, a similar discussion does not exist around whether leave granted to those caring for parents or loved ones at the end of life, particularly those getting home hospice services, should be paid.

Part of the problem is also how differently we view infancy and old age. A daily struggle my wife and I face is how to hold back from oversharing pictures and videos of Eva on social media. We document her life meticulously, afraid of letting any single gesture slip away. Yet, not only do we siphon off old people to live outside of our immediate circles, but images of what the end looks like are scant, uncelebrated and frequently morbid. There is a significant disparity of empathy toward children versus the elderly. Children’s shortcomings turn into viral YouTube videos, while those of the elderly are often derided and ridiculed by the very people charged with taking care of them.

In a more longitudinal sense, we care for our young the same way people have for thousands of years yet how we die has changed significantly over just the past few years and continues to be in flux. Advanced technology means that many people require much more assistance at home than before. Furthermore, while our lifespan has been extended dramatically, the years we spend with disability have also increased. Therefore, while we have had eons to define our roles as parents, the modern caregiver remains undefined and unrecognized, and thus, unsupported. Investing in children makes intuitive sense, but a similar case has not been built for taking care of the elderly.

As with raising a baby, the answer might come from the heart. What is really needed is for us to love the old as we do the new and celebrate the end as we do the beginning.

Haider Javed Warraich, M.D., a fellow in cardiology at Duke University Medical Center, is the author of the book “Modern Death – How Medicine Changed the End of Life,” coming in February 2017.