When his own children were born, pediatric cardiologist Darshak Sanghavi asked for a simple screening test for heart defects. But the test isn’t widely used. 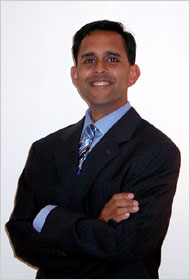 In the middle of one night in August, a seemingly healthy 1-week-old infant named Ryan Olson suddenly began gasping for breath at home in Massachusetts, and his frantic parents rushed him to the hospital. There, emergency room doctors noted the critically ill baby had bluish feet and — even more worrisome — no pulse in his lower body. That almost certainly meant the boy had a “coarctation,” or blockage of his aorta, which is the key pipeline supplying oxygen-rich blood to the body. As the on-call pediatric cardiologist, I was urgently called in to help out.

Ryan’s story isn’t that unusual, and I’ve seen half a dozen similar children recently. A few months ago, the Centers for Disease Control and Prevention reported that the infant mortality rate in the United States was 6.71 per 1,000 live births, which was widely reported as being higher than other developed countries. Birth defects, especially involving the heart, are an important cause of these deaths. In October, researchers studying infant deaths over the past 16 years in California reported that hundreds of American infants like my patient probably die each year due to missed — but treatable — congenital heart defects.

How can we identify these normal-appearing newborns before they leave the hospital, become critically ill like my patient and perhaps die?

Traditionally, prospective mothers have prenatal sonograms to look for birth defects. But the quality of these scans varies widely, depending on the skill of the technician and the supervising doctor. In addition, current guidelines supported by the American College of Obstetricians and Gynecologists mandate only a limited “four-chamber view” of the heart. As a result, a 1998 study from Southwestern Medical School in Texas reported that only one-quarter of major heart defects are identified prenatally.

Unfortunately, when heart defects are missed by prenatal ultrasounds, pediatricians also have a hard time telling if critical cardiac problems are present. Normally, doctors examining newborns suspect heart defects if they hear a loud rushing noise (a “murmur”) with a stethoscope, notice the child has a bluish color, or lacks a pulse in the lower extremities. But in 1999, British researchers found that half of serious heart defects were missed by routine exams after birth. If sent home, these newborns become seriously ill.

Folic acid can prevent up to 50 percent of many heart defects, but only if taken for about two months prior to conception. Because most pregnancies are unplanned, the C.D.C. recommends that all menstruating women should take a daily multivitamin.

What’s needed is a large-scale formal screening program, similar to mammography or colonoscopy to identify at-risk individuals. We already do this to identify newborns with certain hidden but deadly conditions. For example, most state health departments currently analyze a few blood drops taken from a baby’s foot and check for certain genetic problems like phenylketonuria (PKU) and galactosemia, which are treated with special diets to prevent developmental problems.

Recently, researchers have identified a promising new method called pulse oximetry to screen all babies for heart defects. Taped briefly to a newborn’s foot, a small sensor painlessly beams red light through the foot and measures how much oxygen is in the blood. It takes about a minute. (Picture E.T. the extra-terrestrial’s finger lighting up, and you get the idea.) If the screening test is abnormal, doctors perform a confirmatory ultrasound of the heart. Last year, Norwegian doctors published one of the largest clinical trials of this strategy, and checked half of all babies born in the country.

The results were impressive. Within a few hours of birth, pulse oximetry detected three-quarters of critical heart defects that had been previously missed. For every 2,000 newborns screened with the toe light, roughly one with a critical heart defect might have been prevented from going home. The cost-benefit ratio compares favorably to current practices of newborn screening for PKU and hypothyroidism. In January, Swedish doctors published an even more methodical study of almost 40,000 newborns, and showed that oximetry entirely eliminated death from missed critical cardiac defects.

Of course, as with any screening, the technique may miss some defects and also involves some unnecessary, though benign, testing of normal children. But these false positive rates were low (only about one in 1,000 in the Swedish study) and triggered only about two instances of extra, noninvasive testing for every serious heart defect that was picked up. Many parents and doctors caring for children with critical heart defects subscribe to some variant of the “1 percent doctrine.” If there is even a small chance of catastrophe — like the sudden death of a newborn — they feel justified to push for preemptive action, especially when it’s a harmless and inexpensive screening test.

While the screening test is not done routinely in the United States, some hospitals have adopted it, mostly in Texas and Florida, where some small trials have been conducted. But parents can ask doctors to screen their babies for heart defects using pulse oximetry. It’s essentially free since it needs no specialized equipment other than the oximeter, which is present in every hospital already. A specialized doctor isn’t needed; the test is quite simple, and a nurse can do it if the pediatrician orders it anytime after birth, but before discharge from the hospital. Hopefully they won’t mind doing it. Personally, I do think parents should request it. I did for my kids.

Fortunately, Ryan, the baby I was urgently called to treat, had his heart surgery last summer and is doing well now. I see him every few months in clinic.

Dr. Darshak Sanghavi is the chief of pediatric cardiology and assistant professor of pediatrics at the University of Massachusetts Medical School. He is the author of “A Map of the Child: A Pediatrician’s Tour of the Body,” and his Web site is www.darshaksanghavi.com.