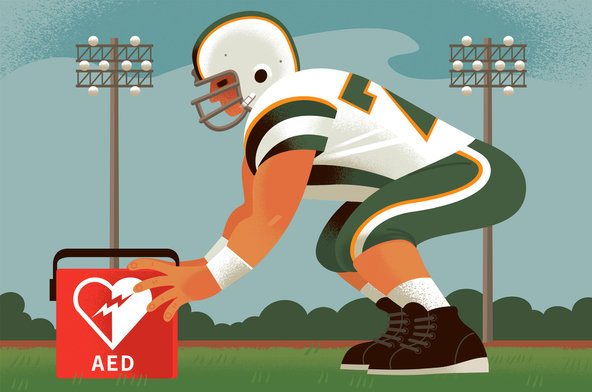 With all the attention on national rules to prevent and properly treat injuries to professional and college athletes, it may surprise you to learn that there are no nationwide guidelines to protect high school athletes from crippling or fatal injuries.

Instead, it is up to individual states and the schools within them to adopt policies and practices that help to assure the safety of children who play organized school or league sports. But most states and schools have yet to enact needed safety measures, according to data from the National Athletic Trainers’ Association.

“Each state has its own high school athletic association, and each policy has to be individually approved,” said Douglas Casa, an athletic trainer and chief executive of the University of Connecticut’s Korey Stringer Institute, named for the former National Football League player who died from complications related to heatstroke in 2001.

“It’s a burdensome, grueling process,” Dr. Casa said, that he and others hope will yield to the efforts of a new program, the Collaborative Solutions for Safety in Sport created by the athletic trainers’ association and theAmerican Medical Society for Sports Medicine.

The program held its second meeting last month, attended by two high school representatives from each state, to provide them with road maps to establish safety rules and policies or laws for high school athletics.

Last year alone, about 50 high school athletes died, according to the association, and thousands suffered long-term complications from sports-related injuries, most of which could have been avoided had well-established safety practices been in place and observed.

The leading causes of sports-related deaths among high school students are sudden cardiac arrest, head and neck injuries, and exertion-induced heatstroke or sickling, which occurs in athletes who carry the sickle cell trait. Fatalities occur primarily because most schools lack four critical ingredients to assure sports safety: emergency action plans, policies for proper conditioning and safe exercise in high heat and humidity, the presence of trained health professionals at all practices and games, and immediate availability of automated external defibrillators, or A.E.D.s, to reset a stilled or erratically beating heart.

In July 2004, Laura Friend of Fort Worth, lost her 12-year-old daughter Sarah during a junior lifeguarding class because nobody recognized the child was in cardiac arrest and no one initiated CPR or used the A.E.D. on the premises. Not until after Sarah died was it known that she had been born with an enlarged heart.

Ms. Friend, who now coordinates a Texas cardiac emergency project, created a nonprofit foundation in her daughter’s memory that has donated 59 A.E.D.s and provided CPR and A.E.D. training for hundreds of youth and adults in Texas.

However, despite a 2007 law requiring an A.E.D. in every school in Texas, “many are locked up in an office and not accessible, or only the school nurse knows how to use it,” Ms. Friend said.

Knowing that sudden cardiac arrest is by far the leading cause of death among student- athletes, Dr. Casa owns an A.E.D. and takes it to every practice and game of soccer, lacrosse and swimming involving his three school-age children.

The Mallon family of Del Mar, Calif., knows all too well the importance of having a medically trained professional on hand during practices and games. Tommy Mallon owes his life and well-being to an athletic trainer and a quick-thinking teammate who refused to help him up when he landed hard after colliding with another lacrosse player when he was 17. Instead, a trainer was summoned who, noticing subtle neurological signs that suggested a catastrophic, potentially fatal injury, called immediately for an ambulance.

Tommy, 23, now a global risk analyst in Austin, Tex., had sustained a fractured vertebra in his neck and torn artery to the brain. Had he been moved incorrectly, he could have died or been paralyzed.

In the years since, Tommy’s mother, Beth Mallon, has been a relentless advocate for teaching athletes how to recognize basic signs and symptoms of trouble on the field or court. Some 5,000 students have already been through the program she developed, Athletes Saving Athletes, taught by athletic trainers.

“In just two hours, the kids learn all they need to know: This could be serious, when and how to get help,” Ms. Mallon said. “We’ve had three success stories so far: one involving a heatstroke, one with cardiac arrest and a third with a neck injury and concussion.”

“High schools spend tons of money on referees, but almost nothing on safety,” she said. “I’d like to see every high school in the country adopt a sports safety curriculum. You never think a catastrophic injury will happen to your kid, but if it does, you’d be so grateful that someone is there who knows what to do.”

Dr. Jonathan Drezner, director of the Center for Sports Cardiology at the University of Washington, outlined the key practices the collaborative project is trying to get every high school that sponsors athletic activities to adopt:

■ An athletic trainer at every practice and game;

■ An emergency action plan to respond appropriately to an athlete in distress;

■ A publicly accessible A.E.D. and school-based program in its use;

Although having a medically trained person readily available can be too costly for many schools, an A.E.D. costs only about $1,000 and can be used to save anyone — coaches, refs and spectators as well as athletes.

“I can’t believe we don’t have universal access to A.E.D.s in schools; they should be like fire extinguishers,” Dr. Drezner said. “There are 7.5 million high school athletes in this country. During the academic school year 2014-2015, there were 55 cases of cardiac arrest among them, and 57 percent died.”

Parents whose children want to play school sports often focus more on uniforms than on measures to protect them from serious or fatal injuries. Experts say that a pre-participation medical exam is critical and should include an EKG if there is any family history of heart trouble.

Coaches should know CPR, the location and use of an A.E.D., the signs of a possible concussion, and when to keep a player on the sidelines. Coaches should also monitor climate conditions and know when to postpone or suspend a practice or competitive event to avoid heat injuries. During hot weather and high humidity, a cooling tub should always be available. If school money is tight, parents might hold a fund-raiser to assure that an athletic trainer or sports medicine doctor attends every practice and game.