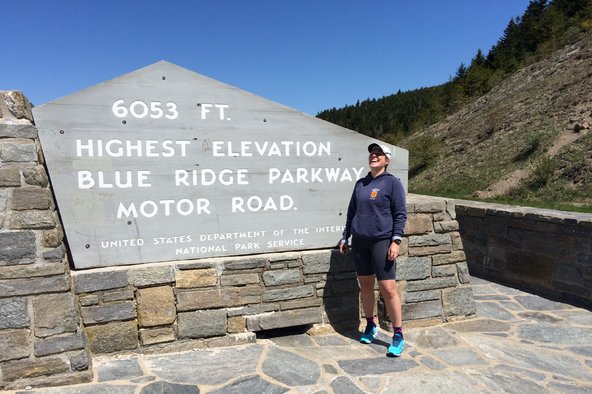 Jen A. Miller in the mountains of North Carolina in May, 2015.Credit

On the second day of a recent two-week road trip, I woke up at a Holiday Inn off Interstate 95 in Santee, S.C., and drove to a nearby state park. I was in my fifth week of marathon training and needed to complete three miles, so why not do so in a new place I might never see again? I’ve run in many unfamiliar towns and cities — Chicago; Minneapolis; Seattle; San Francisco; St. Pete Beach, Fla.; Freeport, Me.; Rome — and each jaunt has given me a unique look at a part of the world I might have missed otherwise. 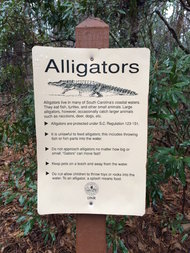 A warning sign at Santee State Park in South Carolina.Credit

By mile one, though, a light rain had gotten slightly heavier. By the time I reached a warning sign that read, “Do not approach alligators no matter how big or small. ‘Gators’ can move fast!” the rain had turned heavy and cold, and I thought that perhaps a treadmill would have been the way to go.

Running while traveling can be a challenge. You’re in a different climate, you don’t know where to go and sometimes, as I learned, wild beasts may be thrown into the mix. But with a little planning and an assist or two, running in a fresh location can give you a chance to experience something new.

“Every city has a feel to it,” said Chris Heuisler, head of the RunWestin concierge program at the Westin hotel chain, which, like a number of hotel chains, provides personal guidance to help visitors keep up with their fitness while traveling. One way to get a taste of a city’s feeling is to run there. “There are so many little details to a city that you would not see if you had not gone for a run,” he said.

The biggest hurdle, he said, is knowing where to go. Many hotels and resorts provide online or paper running maps. On a trip to San Francisco, for example, I stayed at a Kimpton hotel that provided a map with different routes through the city, with mileage marked. Free, ad-heavy paper tourism maps are also provided in many hotel lobbies and local tourism offices.

Another way to not get lost: join a group. “You can always hook up with local running clubs,” said Amy Begley, who ran the 10,000 meters for the United States in the 2008 Olympic Games and is a coach for the Atlanta Track Club. That’s how I got a running tour of Asheville, N.C., this spring. Specialty running stores often hold group runs that welcome visitors, too. You can find running clubs through the Road Runners Club of America and specialty running stores through the Independent Running Retailer Association.

If you’re worried you’ll get to your destination and lose your motivation, Mr. Heuisler suggests signing up for a race. “It holds you accountable but also immerses you into that culture,” he said.

In 2012, while training for my first marathon, I needed to do a 15-mile run while at a conference in Vancouver, British Columbia, so I signed up for and ran a half-marathon on Canadian Thanksgiving Day, then ran back to my hotel to complete the needed miles. I saw parts of the city I never would have otherwise — including a bridge I’ve seen used in movies shot in Vancouver — and have a medal with maple leaves on the ribbon as a souvenir.

Whether you are running to train or sightsee, make adjustments in pace and expectations, especially if the environment is very different from what you’re used to, and make do with what’s available. My first speedwork session of my latest cycle of marathon training lined up with the back end of my road trip, which took me to Jekyll Island, Ga. The island does not have a track, which I would have used to mark the start and finish of each sprint session, but it does have 22 miles of paved trails, so I did my 400-meter repeats there instead, using my GPS watch to tell me when to sprint and when to slow down. I also carried a water bottle because, even though it was cold enough that day for two locals to drop out of a planned afternoon kayak trip, the weather was still much warmer and more humid than I was used to in New Jersey.

And there’s nothing wrong with using the treadmill if you need to, Ms. Begley said, especially if you’re coming from a warm climate into a winter freeze. And don’t rely on pictures of a gym on a hotel website either. “Hotels may say they have a gym, but you don’t know what equipment they have,” she said. Call ahead to ask if they have treadmills and if they’re working.

My latest trip ended on a whimper: a 14-hour drive, with the last two hours in the dark through driving rain and the last 10 minutes through a fog so thick I turned on my flashers. When my gas tank warning sign went on just before I reached my hotel in Rehoboth Beach, Del., I thought, “Maybe you shouldn’t do your tempo run tomorrow,” then parked myself at the bar of Dogfish Head Brewing & Eats.

I did end up doing my run, but not in Rehoboth Beach, as originally intended. I slept in, then took the Cape May-Lewes Ferry to Cape May, N.J., a place I’ve visited too many times to count, and did a five-mile hard run through the meadows of West Cape May along Sunset Boulevard, a route I know well.

Then I had a sandwich, a cup of coffee and — finally — went home.