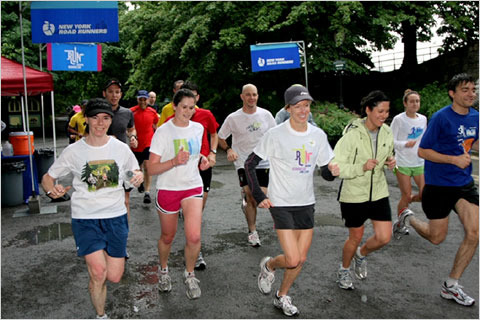 The rain — on National Running Day no less — had to be a test from the running gods. How much do you really want to do a run in the park with Olympian Deena Kastor after a long day at work? Wouldn’t the gym be a lot less wet?

I ducked back into my apartment for a hat.

Making my way into Central Park last evening, I breathed in the deliciously earthy odor of wet leaves and worms. I suddenly felt buoyed by the tranquility of the setting and forgot about the rain soaking my shorts and apparently not-water-resistant-after-all running jacket.

Weather is only another variable for this sport; marathons have no dome. Just ask the folks who ran the Chicago Marathon the last two years. You run in the heat, the rain, the snow and whatever other plague comes down because that day is on the schedule.

A group run can make the rain seem almost invisible.

Scott Murphy, 40, showed up at the Engineers Gate for the New York Road Runners group run wearing a pair of glasses that were in desperate need of windshield wipers. “I’m not planning to run hard,” he said.

When I asked him about his best run in the rain, he smiled and recalled a Tuesday night run last year with Bob Glover, the longtime running coach for the New York Road Runners, while training for the 2008 New York City Marathon.

“We all went out together, there was some lightning,” Mr. Murphy said. “But the more it rained, the more determined we were to see through to the end of the long run.”

It made me think of the “No Excuses – Except Lightning” Wednesday Workout Group that met last night in Cedar Park, Tex. It was one of more than 200 runs held across the country yesterday to celebrate National Running Day, sponsored by running clubs and stores from Boston to San Diego.

I know groups elsewhere had warmer, drier evenings. But in a way, that would have been too easy. This sport is, at its core, about the struggle.

Ms. Kastor, a three-time Olympian and 2004 marathon bronze medalist, recalled how she won her first national title as a professional in the rain.

“It was in Portland, Ore., where it always rains, but this was bitter cold wind and rain, and it was horrendous,” Ms. Kastor said of her 1997 run in the cross country championships.

Kind of hard to complain, then, about a downpour that turned into a drizzle by the time 30 or so runners — and one dog — convened at East 90th Street to run with Ms. Kastor.

She is in town for Sunday’s New York Mini 10K, an event she will likely end up not running because recently she reinjured her right foot — the same one she broke at the beginning of the Beijing Olympic marathon. She only feels the pain once she hits full stride, so she was comfortable leading the group for two 1.7-mile laps around the reservoir bridle path.

As we began the first lap, I broke away to talk to a lone runner named Mary Callahan who came storming in from the upper loop of the path.

“It feels peaceful, it’s cool and it’s not really isolated, but it’s alone,” she said amid brisk strides. “You just feel like you’re one with everything behind you, more so than with people all around.”

When we completed our second lap — passing another group of about 40 young professionals from the Road Runners — runners posed for pictures. The “I Ran Today” National Running Day stickers many wore were redundant; the mud-streaked calves were proof enough.

“The first time I ran in the rain, I was kind of turned off by it, but I went for it and loved it,” said Gene Sunik, 36, who was training for his first marathon. “I heard that you get more oxygen in the rain. So I’ll be the first one out there when it rains.”

Scott Trappe, an exercise physiologist at Ball State, denied that there’s extra oxygen when it rains, though meteorologists note that it’s more humid, making the air easier to breathe. Or maybe the rain, combined with the run, simply washes away the day.

As if on cue, when the run ended, the rain had stopped. A parting gift from the running gods.