For nearly all of us who see ourselves (wishfully or otherwise) as athletes, competitive sport leaves us behind long before we’re ready. Yet we often find meaning in memories of competition from years past, and we hope our children will find the same. There is, and will always be, a competitiveness to life, and a ready metaphor in how that competition plays out in sports. And whether you’re an athlete or not, such themes carry a lasting power.

So why is the sport perhaps most naturally suited to teaching lessons, the very first sport most of us ever practice — running — so terribly overlooked when it comes to stories? Why aren’t there more tales about the trials and glories of track?

Into that gap come two books for young readers revolving around middle-school running teams. These novels have decidedly different narrative voices, but their characters share the common struggle of finding strength to reach the finish line when much stands in the way. 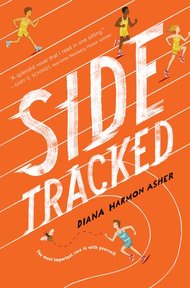 In “Sidetracked,” a debut novel by Diana Harmon Asher, Joseph Friedman, a middle-school student, finds life to be a series of overwhelming distractions, all rushing toward him in ways his mind struggles to process. He learns, and looks at life, differently than most.

Beyond the uncertainties all preteens face, Joseph is burdened by a disparate set of phobias — from gargoyles to goose poop to hard-boiled eggs to his dread of the school bully, Charlie. With a condition one school psychologist labels “anticipatory anxiety,” Joseph is consumed by his fretting. At one point he writes up a “worry list” that includes notes such as “Worry expands to fill available time,” and “Even if something’s already happened, you can still worry about it.”

He seems to fit the shape of the antiathlete, physically and in self-image, until his resource room teacher, Mrs. T, announces the formation of a new school track team and drafts Joseph to its ranks. The team begins competition with cross-country season, and for the first time, Joseph is introduced to the idea of a PR — a personal record. As Mrs. T says, “You’re trying to do your best. Not anybody else’s, just yours.”

On the Lakeview Leopards, Joseph finds a challenging and supportive voice in his teammate Heather, who is new to the school and proves to be the Leopards’ most powerful and determined runner, despite a body type that doesn’t fit the image of a fleet racer. Turns out she also packs a mean punch in defending Joseph, as the school bully discovers. Heather captivates through her force of personality as much as her athletic performance.

At times Joseph’s voice lacks consistency, adopting a tone that seems beyond his age. (“Maybe I’ve had enough years of personal defeat and I’m ready to give shared misery a try,” he says about being on the team.) But the story has a winning momentum, to go with its pleasing evocations of the symphony of running. Asher’s fine descriptions — of feet on the track, of an uphill run, of pushing beyond one’s initial limits — are a call to get off the couch and onto the road.

The season pushes toward its finish, including a climactic race scene delivered with suspense and a dazzling plot twist, as Joseph finds support from his rascal of a grandfather, who provides some warm humor, and from teammates who are faster — and slower. Joseph realizes that he is needed — as a runner, and more important, as a friend to Heather, who faces her own uncertainties at home. As the season ends, readers may well believe that for Joseph, the personal best is just beginning.

The narrator and title character of Jason Reynolds’s excellent novel “Patina,” the second in his series about the Defenders track team that began with the National Book Award finalist “Ghost,” projects none of the fears Joseph carries. Patina doesn’t try to outrun her worries as much as she suppresses them through a fierce will. She’s determined to show strength for everyone else in her life — her younger sister, Maddy, who adores her; her mother, Bev, who has lost both legs to diabetes; (“the sugar” as Patina calls it); and her Aunt Momly and Uncle Tony, who have taken over the daily job of raising her and Maddy.

But there are plenty of challenges that shape her path beyond the racing lanes, including the sudden death of her father in his sleep. Patina Jones “ain’t no junk,” as she describes herself. But she is “the new girl,” having moved from her old neighborhood and Barnaby Middle School to the “bougie” Chester Academy, where she finds an all-girls student body that is more affluent, not only less familiar but often downright strange. She labels some as the YMBCs — You Might Be Cuckoo.

Patina finds her refuge in the Defenders, where she is placed on the elite club’s 4 x 800-meters relay squad. This means she will have to rely on something more than her speed and will — she must depend on others for her competitive success, a spot far from her comfort zone. But she has lost enough in her life, all of it beyond her control. Losing any race isn’t part of her plan. 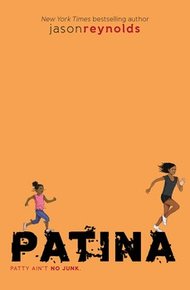 The challenges in the relay come less in the overall pace of the group than in their ability to pass the baton smoothly and efficiently between them. Patina runs the anchor leg, the most pressured position on the team, and must learn to accept the baton from her teammate Krystal, who doesn’t trust Patina, based on much more than their athletic performance. After they drop the baton in practice and bicker with each other, their coach makes both girls hold the baton until they work it out — a tense and effective scene, where the resolution isn’t neat, but real.

Reynolds’s ability to weave story lines in Patina’s life across both particular and universal ground — race and class, acceptance and grief, loyalty and individuality — is seamless and moving. While a host of other notable characters emerge briefly but vividly in this volume of the series, the real prize is Patina’s voice. Powerful without being preachy, her language has a rhythmic pulse filled with humor, wonder and insight, much of it illuminating an inner life beyond a hard exterior. Readers will cheer her on, as much for her sass and wit as for her vulnerability and willingness to grapple with life, even when the race isn’t won. And after spending time with the Defenders, you’re likely to cheer their runners on through the rest of the series’ books slated to follow this one.

Which brings us to the end. Some young readers will find the conclusion to this volume, which includes a compelling, breathless relay race and Patina’s push toward the finish line, to be both a shock and a challenge. The competitor in us may yearn for more on the final page, but there is a lesson there too. The finish line isn’t as clear as we might think.

Tom Rinaldi is a reporter for ESPN and the author of “The Red Bandanna,” which will be published this fall in a young reader’s edition.