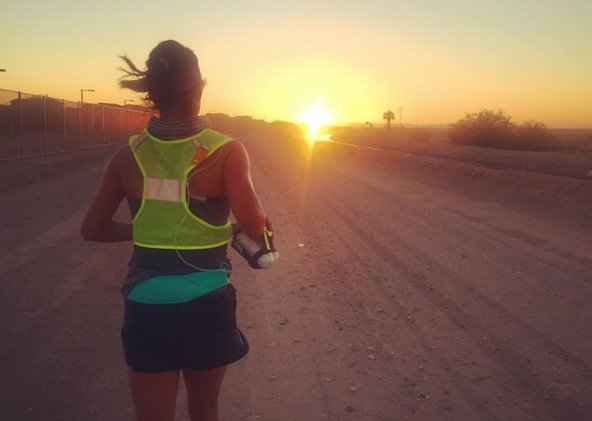 Keila Merino, a schoolteacher from New York, set out this summer to run across America.Credit

The open road has long been a siren song for those wishing to cross the country by car, motorcycle, even bicycle. Add another traveling type to the list: runners, who are setting off on foot, often with a fund-raising hook and a social media following.

“It wasn’t nearly as big a thing as it is now,” said Jim McCord, a Cincinnati-based real estate agent who ran across the United States in 2002, the only person in the country to do so that year. Since then, Mr. McCord has been tracking those who make the journey at the USA Crossers Facebook Page, a public group devoted to cross-country runs. He says there have been around 300 crossers since the first recorded crossing on foot, in 1909.

Mr. McCord completed his run in 180 days with two breaks — one to attend a wedding, and another to attend a graduation. He said the physical part wasn’t the biggest hurdle. “The challenge is keeping your sanity while you’re doing it,” he said.

Country crossers have heard every “Forrest Gump” joke in the book. But unlike that fictional character, who set off from Santa Monica Pier and “just kept on going,” almost all who undertake the challenge have a set goal in mind, and they plan and train for the journey well in advance.

Adam Kimble ran a number of long races in 2014 and 2015, including the Leadville Silver Rush 50 miler, the Yellowstone Teton 100 miler, the Ultra-Trail Cape Town 100K and the Gobi March 250K in China, which he won, before attempting his cross-country trek, which he successfully completed in April.

“I’m always on the lookout for the next challenge,” said Mr. Kimble, who ran to raise money for impossible2Possible, a nonprofit organization that sponsors expeditions to encourage young people to stretch their limits. “It ended up being a really cool way to motivate and inspire people to take on crazy or unique challenges in their lives.”

Mr. Kimble, who had quit his job as an event planner before the run, set off from Huntington Beach, Calif., hoping to break the Guinness World Record for the men’s fastest time crossing the country on foot – 46 days, 8 hours and 36 minutes. But an inflamed tendon in his shin plus iliotibial band issues meant he had to scrap that plan, focusing on simply finishing the run. He shifted his endpoint from New York City to Tybee Island, Ga., and finished the 2,500-mile run in 60 days.

He celebrated his finish with a big breakfast and a couple of Yuenglings (he hadn’t allowed himself beer during the crossing). The journey, he said, helped start him on a new career: He’s now a motivational speaker and an ambassador for a handful of running-related products.

Keila Merino, a New York City public school teacher and two-time New York Road Runners ultramarathoner of the year, set out to run across the country earlier this summer. She was inspired in part by others who had already completed the journey and also by “Unstoppable Woman,” a book about Mavis Hutchison, a South African runner who was the first woman to run across the United States in 1978 and who still holds the Guinness World Record for women: 69 days, 2 hours and 40 minutes.

Ms. Merino wanted to break that record while also raising money for Mighty Milers, a New York Road Runners youth running program where she is also a coach. “It’s more of a dream than just a goal,” she said before starting her run.

Nailing down the logistics of the run while working full time wasn’t easy, she said. And her training plan involved running a marathon every day. She got sponsors and volunteers to help pay for the trip, map a route, arrange her crew and calculate how far she’d need to run each day if she was to meet her goal of breaking Ms. Hutchison’s record.

Social media has been a boon for those making the crossings now, said Mr. McCord, something he didn’t have when he did his run in 2002. It makes it easier to connect with fund-raising sources as well as others who have completed the run and may have useful advice. In addition, runners can arrange for others to act as temporary pacers and organize support crews in different locales as they complete their run, not to mention a fan base.

“Back then it was hard to get the word out other than newspaper and radio and news clips on TV,” Mr. McCord said. “What’s so awesome about these guys and gals who get to run across the country now is they’ve got thousands of people following them” on social media.

Ms. Merino had more than 2,000 people following her run on Facebook when she began it in Los Angeles on July 1. (Mr. Kimble has more than 12,000 Facebook fans, many of them picked up during this cross-country run.) She had planned to run 50 miles a day, mostly overnight because of the heat, and finish in mid-August.

On day two, she rolled her ankle, though she kept on running. Several days later, her knee went, and after 16 days she had to call off the run.

“It’s a little bit of a heartbreak,” she said. She says she will try again, and next time plan her route better, since she’d been surprised by finding that some of the roads on her route were closed.

“I’m the type of person who doesn’t like to be down on it,” Ms. Merino said. “I’ll learn and then move on. Hopefully next time will be easier, and successful. If I fail again, I guess I try again.”

Jen A. Miller is the author of Running: A Love Story.