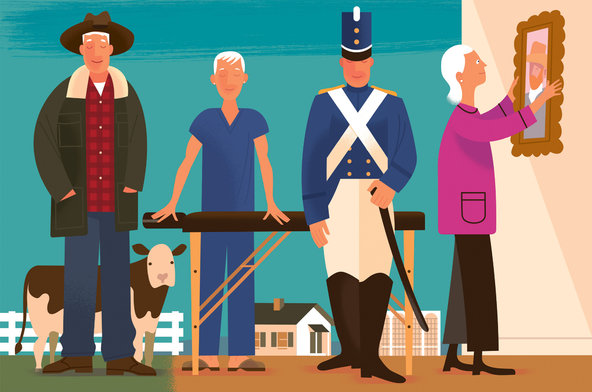 Maybe you lost your job, or your interest in the job you’ve been doing. Maybe a divorce or death in the family has threatened your economic stability. Maybe you think you’re now too old or lack the training to switch to something more satisfying or remunerative.

I interviewed several people in similar circumstances who reinvented themselves, sometimes against considerable odds, other times in surprising ways.

After 25 years in family practice in Park Slope, Brooklyn, Dr. Kenneth Jaffe resisted the encroachment of managed care and found he could no longer take the time he needed to care for his patients and make a living at it.

So at 55, inspired by courses he took at the Columbia University Mailman School of Public Health, he quit medicine, moved upstate to an economically depressed area where the land was plentiful and cheap, and began raising grass-fed beef free of hormones and antibiotics. He named his enterprise Slope Farms in honor of his old neighborhood and the Park Slope Food Coop, which sells meat from his 200 head of cattle.

Now 66, Dr. Jaffe said he remained fulfilled by his work in sustainable agriculture. He helps other farmers near his home in the Catskills do the same, and supports a farm-to-school program that brings grass-fed beef to children in kindergarten through 12th grade.

Mary Doty Sykes had been a social worker for 30 years, counseling and teaching teenage parents and adolescent girls about sexuality, self-image, family issues and job training, first in Chicago and then in New York City public high schools. When she became a divorced empty-nester in her early 50s, she decided it was time to get out of the city.

“I rented my house to pay for schooling as a massage therapist,” an interest she developed after techniques in alternative medicine helped her recover from serious injuries sustained in a car accident. Starting at 55 as a licensed therapist, for 13 years she did therapeutic massage at various sites, often for older adults, in western Massachusetts. Now 75 and back in New York, Ms. Sykes offers reiki therapy, and participates in a variety of dance classes. “I’m lucky I can do it all; I have a lot of fun,” she said.

“Fun” is an understatement for Richard Erde, also 75, who worked as a computer programmer for 28 years. After he retired in 2005, Mr. Erde indulged a longstanding interest in opera by auditioning to become an extra, or supernumerary, at the Metropolitan Opera.

“I’ve been on stage at the Met literally hundreds of times with world-famous singers and I never sang a word,” the Brooklynite chuckled. “I’ve worn all kinds of costumes, from Buddhist priest to Russian soldier. It’s ecstatic at times, plus I get paid to do it.” When the Met season ends in late spring, he does the same with American Ballet Theater, where the “supers” are often integrated with the corps de ballet as it moves around the stage.

From age 21, Beth Ravitz worked as a fabric designer, mostly in her own successful business in New York. Then at 40, she gave it up to spend more time with her three young children and two stepchildren. The family moved to Coral Springs, Fla., where, she said, “I didn’t want to think about money; I wanted to nourish my soul and become a real artist.”

While enrolled in a ceramics class at a community college, she saw ads seeking applicants to create public art, decided to go for it, and was hired to do a project. After earning bachelor’s and master’s degrees in fine art, she was able to teach at the college level, a job she loved, and ultimately became what she is now at 66: a public art consultant for two Florida cities (Lauderhill and Tamarac) and an advocate for artists whose work she said is too often undervalued. “I love the fight, and I love that I can make a difference,” Ms. Ravitz said.

Although I have been like a horse with blinders, starting at 23 as a science and health writer and never straying from my chosen path for 52 years, I have great admiration for the courage, imagination and determination of people like these four, who reinvented themselves by believing that you never know what you can do until you try.

Rather than embark on a new career in semiretirement, I’m expanding my horizons by learning Spanish; going to more concerts, operas, lectures and museums; and traveling. I recently took my four grandsons on an Alaskan nature cruise and a tenting safari in Tanzania.

I also adopted a puppy and trained him to be a therapy dog to cheer patients and staff in our local hospital. And if I can find a teacher with a flexible schedule, I hope to learn a new instrument, preferably the bandoneon, a kind of concertina featured in Argentine tango music. (Suggestions for teachers, anyone?)

One thing I’m already learning is my limits: knowing when to say no so I will have the time and energy to do what is most important to me in the last quarter of my life.

Although only 37, Dorie Clark, a teacher at Duke University School of Business and author of “Reinventing You,” is expert at self-reinvention and helping others make changes in their lives.

“Broadly speaking,” she said, “the same principles apply whatever your age.” But she has particular advice for people over 50.

■“Make a special effort to familiarize yourself with social media and the new technology — they’re a proxy for how ‘with it’ you are.”

■“Recognize that you’re likely to be overqualified for certain jobs. It could be the elephant in the room, so it’s important to bring it up first. Maybe say that you’re looking for a new adventure, you don’t need to be the boss, you’re ready to be a team player.”

■“Surprise people to counter any fixed image they may have of you. Your résumé may say one thing, but that doesn’t mean it’s the only thing you can do. Show you’re serious about reinventing yourself, perhaps by volunteering or writing a blog — something that forces people to see you in a new way.”

She also suggests “reconnecting with dormant ties” — people you had a good relationship with years earlier. They may be able to open doors or have ideas that you hadn’t thought of.

Tell Us About Your Personal Reinvention

By submitting to us, you are promising that the content is original, does not plagiarize from anyone or infringe a copyright or trademark, does not violate anyone’s rights and is not libelous or otherwise unlawful or misleading. You are agreeing that we can use your submission in all manner and media of The New York Times and that we shall have the right to authorize third parties to do so. And you agree to the rules of our Member Agreement, found online at our website.

Thank you for your submission.