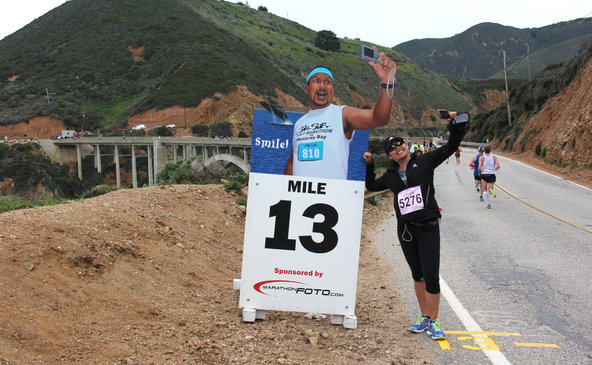 At a recent 5K in Boston, I got off to an aggravatingly sluggish start. I couldn’t get going, not really, because runners around me took pictures and videos of themselves beginning the race. Then I nearly barreled into a runner who came to a dead stop to take a picture of the pros who had started the race waves ahead of us as they came across the finish. When I reached the point in the race that crosses over the finish line to the Boston Marathon, where an announcer repeated loudly over and over that runners should not stop to take selfies, two runners just ahead of me did anyway, mucking up the path of the runners behind them. I snapped and yelled, loudly, “Just run!”

I’ve been running for 10 years, and there have always been inconsiderate racers who do whatever they want, wherever and whenever they want. But with the advent of smartphones, such incidents have blossomed.

Smartphones can be powerful running tools: They track your progress and location, play your music and podcasts, and can serve as a safety device in case you get lost or need assistance. Race officials have also created apps to keep runners up to date with what’s going on during race weekend or, in the case of an emergency, during the race itself.

But smartphones have also become social media spouts for runners to take selfies, FaceTime a family member on a crowded course, or chat on the phone in the middle of a race, oblivious to the people behind and around them.

According to Running USA, a nonprofit group that tracks data and trends on running, 61 percent of runners regularly run with a cellphone, most commonly to play music, track mileage and workouts, map routes and use GPS features. The group found that millennials and Gen Xers are most likely to run with their cellphones, and also most likely to use social media channels to share running-related activities. 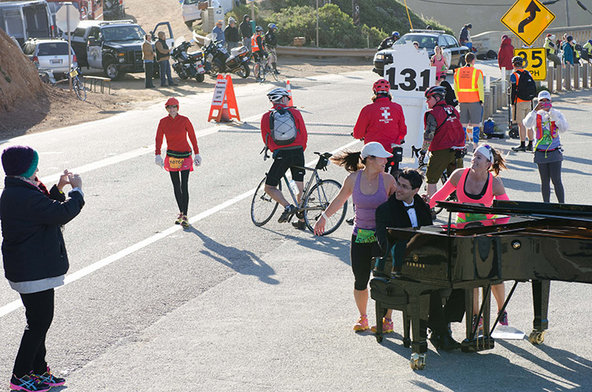 “Tech is just such an important part of sport in general, whether it’s nutrition, training information, event information, fitness tracking — there’s so many uses or applications for technology now,” said Rich Harshbarger, the chief executive of Running USA.

While he knows that this can cause some friction in races, he sees social media as having helped the sport. “It has made the sport more accessible, less intimidating, and I think it encourages participation,” he said. That finish line photo, or sharing a training run on Twitter, can help runners find others who are doing similar events, and encourage them to train or run a race together. Seeing people just like you doing this thing they love can also inspire you to try it too.

While race directors are embracing the technology to enhance their events, they are also coming up with creative ways to deal with the downside of smartphones.

Many runners elect to take on the grueling hills of the Big Sur International Marathon because of its breathtaking views along the coast of California. The marathon’s race director, Doug Thurston, knows that most will be taking pictures during the race.

“I don’t think you could ever” ban runners from taking photos, he said. “And I don’t think you want to do that.” He just wants runners to do so safely, and to be considerate of others on the course.

The Big Sur marathon’s safety rules specifically ask runners to move “to the far left side of the road or the dirt shoulder before taking pictures.” The course also has designed mile markers with ample space around them where people can stop to take pictures.

“We have iconic images on our course, and that’s what we’re known for,” Mr. Thurston said. “We encourage people to document and catalog their experiences. But we encourage them to do it safely, with minimal effects to other participants.”

In 2014, after a series of much publicized incidents, including one woman who ran the New York City Half Marathon snapping selfies at every mile with a different man in the background of each picture, the New York Road Runners added a section to their code of conduct under the label “Mobile Devices” that says using smartphones for pictures and social media updates during any of their races is “strongly discouraged, as it decreases your awareness of other participants around you.” They have also banned selfie sticks entirely from races.

“It’s part of the changing landscape of what’s going on here and in the world. It’s an evolution,” said Peter Ciaccia, president of events for the New York Road Runners and race director of the New York City Marathon. “We don’t want to be the run police. We want everybody to come out and have a good time, and the message we keep driving home is that everyone should be respectful of each other and be aware of what’s going on around them.”

Mr. Harshbarger of Running USA, who spends a lot of time in airports while traveling for his job, points out that the problem isn’t limited to races. If “someone is walking in the middle of the airport terminal texting and weaving all over, I want to ask, ‘Can you just get out of the way, because I have a connection?’”