In September 2015, Vanessa and JR Ford sent a group email to announce that their 4-year-old, whom their family and friends knew as their son, would be starting prekindergarten that year as “her true self” — a girl named Ellie.

The Fords’ decision to help Ellie transition socially from boy to girl was not something they did on a whim. Starting well before age 4, Ellie showed countless signs of being unhappy as a boy: being sullen; drawing self-portraits as a stick-figure girl; pretending to be female superheroes; dressing up in princess costumes.

“For Ellie, whenever she put on a dress, she would turn into a different person; she would smile at people and talk to people,” Ms. Ford said. “It was such a profound change, we thought we had a son who would grow up to be a gay man. We were only thinking about sexuality because it didn’t occur to us that gender identity was a part of this.”

That is, until their family’s “Frozen”-themed birthday party. When Ms. Ford said to her child, who was dressed in a Princess Elsa costume, “You’re my favorite princess boy,” the response was strikingly clear: “Mom, I’m not a boy; I’m a girl in my heart and my brain.”

The Fords are one of the families profiled in the upcoming documentary “Gender Revolution: A Journey With Katie Couric,” airing Feb. 6 on the National Geographic channel. The TV special accompanies the January issue of National Geographic, which is devoted entirely to gender and features a 9-year-old transgender girl on the cover.

The family also is participating in a study called the TransYouth Project, led by Kristina Olson, an assistant professor of psychology at the University of Washington in Seattle, who is featured in the documentary. The research is the first large-scale, national, longitudinal study to examine the development of transgender and gender nonconforming children.

“By the time Ellie gets to puberty, there will be a couple hundred kids who are 10 years into the study having already gone through puberty,” Ms. Ford said. “So all of these questions around stability of gender, puberty blockers, cross sex hormones, impact in mental health — we’re going to have such a better idea because of other kids who’ve been surveyed.”

Initial findings, published last year in the journal Pediatrics, revealed that transgender children who socially transitioned with the support of their families did not have higher rates of depression than children who were gender-conforming, or cisgender. While 40 percent of transgender people report having attempted suicide, this study shows that mental health problems are not inevitable if children have a support system.

“The one really big thing that we know about human development is that feeling loved and supported is really important to the well-being of all children,” Dr. Olson said.

The Fords, who live in Washington, D.C., sought guidance from gender experts and mental health practitioners. Ellie, they said, was “consistent, insistent, and persistent” in her gender identity, which experts say is a hallmark for those who are transgender — those whose gender identity does not align with the gender they were assigned at birth. An estimated 1.4 million adults in the United States currently identify themselves as transgender.

Though many children will experiment and play with a range of gender roles at different points in their life, early data reveals that kids who truly are resolute about their gender identity are unlikely to feel differently as adults.

The Fords felt certain that their child was not merely going through a phase. In fact, the Fords said, once she began to express herself and dress as she wished she immediately blossomed into a happier child. She chose the name Ellie, inspired by a favorite stuffed elephant.

The Fords said they went public with their story because they feel it is important to raise awareness about transgender issues and to humanize and normalize gender nonconforming people.

The editors at National Geographic said they had similar motivations for devoting their magazine issue and documentary to the subject. National conversations surrounding transgender rights (such as the battles over restroom laws) and gender equity (including the quest for equal pay for women and parental leave for fathers) call for examination, said Susan Goldberg, editorial director of National Geographic Partners and the first female editor in chief of the magazine. “Families are grappling with these issues, schools are, the courts are, and legislators at all levels of government are — and science is looking more at it too,” Ms. Goldberg said.

Even the language we use to talk about gender has changed. Facebook offers more than 50 gender options. National Geographic developed a glossary of terms and a discussion guide for parents, teachers and children.

“We’re in the middle of a real historical, cultural shift,” said Christia Spears Brown, a professor of developmental psychology at the University of Kentucky and author of “Parenting Beyond Pink and Blue: How to Raise Your Kids Free of Gender Stereotypes.” “The complexity of gender has always been there, we’ve just long ignored that it’s much more complex than we want it to be.”

The response to National Geographic’s issue reflects how divisive the topic is for many people. An editor’s note on the magazine’s website about its transgender cover girl, Avery Jackson, said: “Tens of thousands of people have weighed in with opinions, from expressions of pride and gratitude to utter fury. More than a few have vowed to cancel their subscriptions.”

The Jacksons, who live in Kansas City, Mo., received hate mail and death threats via social media. As a result, they decided to step away from the public eye and, through a publicist, declined to be interviewed. 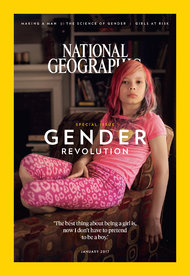 But the Fords say they have had overwhelming support from their community. Still, they are acutely aware of the national climate and controversies surrounding transgender rights. They try to shield Ellie, but occasionally she will hear something on the radio about bathroom laws.

“The very first question we got about growing up was, ‘Daddy, do I have to have a man voice like you?’” Ms. Ford said. “We’ve told her that we can help her, and medicine can help her be the girl and the woman she wants to be.”

The Fords are optimistic, but they are also bracing themselves for possible struggles. To that end, they legally changed their child’s name to Ellie the week before the inauguration in an event they called “Ellie’s Forever Name Day.” They consider it a first step in legally protecting her rights as a transgender person.