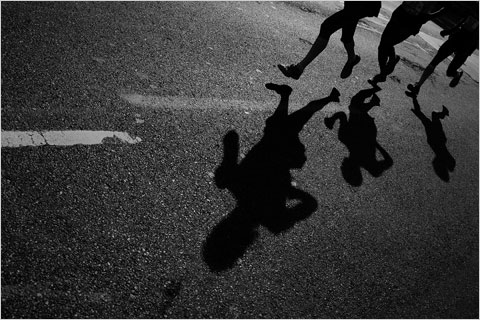 Last year the European Heart Journal published a study that continues to prompt discussion among researchers who work with marathoner runners and those, many of them the same researchers, who run marathons. In the study, German scientists scanned the hearts of 108 experienced, male distance runners in their fifties, sixties and seventies.

The runners had completed a minimum of five marathons in the prior three years. By standard measures, the group’s risk for heart problems was low. But when the researchers studied the runners’ scan results, they found that more than a third of the men showed evidence of significant calcification or plaque build-up in their heart arteries. Several also had scarring of some of the tissue in their hearts. “In our study,” the researchers concluded dryly, “regular marathon running seems not to protect runners” from coronary artery disease. “In fact,” they continued, “we even cannot exclude the possibility that exercise to this degree has deleterious effects on coronary arteries.”

Is it possible that running a marathon could be unwise or insalubrious? Is there a chance that something about the distance and exertion, at least in some people, harms the cardiac muscle?

A growing body of science, much of it released this year, is attempting to bring some clarity to the issue. In a representative study published in January, doctors in Australia found that 32 percent of the runners they tested after the Perth Marathon had elevated levels of cardiac troponin, a substance in the blood that usually suggests cardiac injury. Although some previous studies had intimated that inexperienced or poorly trained runners were most likely to experience elevated troponin, here the elevation was unrelated to how fast or slow racers ran, or how much training they had done. Another experiment, published in July, produced similar results among 78 male marathoners. More than half of the racers wound up with elevated troponin and other cardiac-damage markers. There was no correlation between the men’s pace or training and their troponin levels.

Finally, in one of the largest recent studies, published in January, Canadian researchers recruited 129 non-elite runners in Winnipeg and tested their blood just before they ran a half or full marathon. Their blood markers for heart injury were normal. By the time they’d reached the finish line, though, according to blood tests done there, most of the half marathoners and even more of the marathoners displayed elevated troponin and other blood markers of heart damage, and after an hour, when they were tested yet again, even more of both groups, especially the marathoners, showed blood indicators of cardiac damage. “We measure those same blood markers when someone comes in to the emergency room and we suspect a heart attack,” says Davinder S. Jassal, MD, an assistant professor of cardiology, radiology, and physiology at the University of Manitoba medical school in Winnipeg and lead author of the study. Blood profiles like those displayed by the runners, he says, “are similar to those in a very mild heart attack.”

But most sports cardiologists are quick to point out that the majority of these studies have been small and the results open to differing interpretations. “We don’t necessarily completely understand what’s going on inside” the hearts of runners during a marathon race, says Paul D. Thompson, MD, the chief of cardiology at Hartford Hospital in Connecticut and one of the nation’s leading experts on sports cardiology, as well as, himself, an avid marathon runner. “It’s possible that the heart may be stressed somewhat” by the exertion of a marathon race, he says, just as quadriceps and other muscles are. But “most folks don’t really think there is serious cardiac damage,” he continues, “although there may be fatigue, transient cardiac fatigue.” It’s also possible that some of the blood markers indicate damage to muscles other than the heart. Injured skeletal muscles produce excess troponin, too, he says, and although the troponin measured in the current studies has molecular qualities that indicate it originated in the heart, “it’s just not really clear yet what’s going on,” he says. He’s still running marathons and has no plans to stop.

Most important, the few studies that have followed-up with runners after the race suggest that any heart damage is fleeting. Winnipeg’s Jassal, for instance, led a second study of Canadian marathon runners, published in May in the American Journal of Cardiology, that, for the first time, tried to correlate the blood markers of injury to any actual structural changes or scarring within the runners’ hearts. He tested them before and after the race, and then had them come in a week later for ultrasounds and cardiac MRI scans, looking directly into the interior of the heart. “We showed that that there was none of the damage you’d expect to see” based on the troponin and other cardiac-damage markers in the runners’ blood, he says. “We strongly believe” that the blood markers “did not indicate true heart damage and any injury was purely temporary.”

Still, he and other researchers in the field recognize that questions remain. Why, for instance, were the hearts of some of the German marathoners scarred? What about race training, during which most competitors will run for up to 20 miles at a time? Is this prolonged running also potentially hard on the heart; or is there something unique about the conditions of the race itself? And shouldn’t your heart be getting healthier from all that running?

The answer to the last question, at least, seems clear, for most people. “Being fit is protective” against heart disease and other heart problems, says James Freeman, MD, a fellow in cardiovascular medicine at Stanford University School of Medicine, and, like Thompson, a dedicated runner. But it’s not a panacea, he adds. If you’re genetically prone to heart disease or misspent your youth smoking and carousing, running will not floss your arteries clean.

Which may partially explain the results from that provocative German study. Many of the marathoners in that study came to the sport in middle-age, Jassal points out. “They’d been smokers. They had existing heart disease,” making teasing out the effects of marathon running tricky.

So Jassal plans to mount a study soon in which marathon runners over 50 who have no hardening of the arteries will be evaluated before and after completing a marathon.“We’ll see if any scarring develops.”

In the meantime, “I don’t think most people who are going to run a marathon need to worry” about their hearts, he says. “The indications are that nothing serious is going on.”

If, of course, you have any symptoms of heart problems, such as shortness or breath or chest pains, while training for or running a marathon, stop at once and see your physician. Heart attacks can and do happen during marathons often to runners who have underlying heart disease. If you have cardiac disease, the stress of running a marathon can trigger an attack, Freeman says.

Still, the message for the majority of runners as they prepare for an upcoming marathon, is, he says, “You almost certainly are doing your heart a favor.”