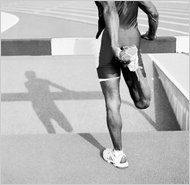 Should you stretch before a run? That question, which has prompted countless academic studies, debates and inter-running-partner squabbles, is now at the heart of a notable new study published in August on the Web site of USA Track and Field, the sport’s national governing body. The study, one of the largest of its kind, involved almost 1,400 runners, from age 13 to past 60, who were assigned randomly to two groups. The first group did not stretch before their runs, while otherwise maintaining their normal workout routine: the same mileage, warm-up (minus any stretching) and so on. The second group stretched, having received photographs and specific instructions for a series of simple, traditional poses, like leaning over and touching toes, that focused on the calf, hamstring and quadriceps muscles. The volunteers were told to hold each stretch for 20 seconds, a technique known as static stretching. The entire routine required three to five minutes and was to be completed immediately before a run.

The volunteers followed their assigned regimens for three months. Predictably, since running, as a sport, has a high injury rate, quite a few became injured during the three months. About 16 percent of the group that didn’t stretch were hobbled badly enough to miss training for at least three days (the researchers’ definition of a running injury), while about 16 percent of the group that did stretch were laid up for the same amount of time. The percentages, in other words, were virtually identical. Static stretching had proved to be a wash in terms of protecting against injury. It “neither prevented nor induced injury when compared with not stretching before running,” the study’s authors concluded, raising the obvious corollary, so why in the world do so many of us still stretch?

Stretching is, of course, a contentious issue in sports. The bulk of the available science strongly suggests that static stretching before a workout not only does not prevent overuse injuries but also may actually hinder athletic performance. “There is a very important neurological effect of stretching,” said Ross Tucker, a physiologist in South Africa and co-author of the Web site The Science of Sport. “There is a reflex that prevents the muscle from being stretched too much,” which is activated by static stretching, inducing the muscle to become, in effect, tighter in self-protection. Past studies have found that athletes’ vertical jump is lower after a bout of static stretching than with no stretching at all. They can’t generate as much power. Meanwhile, other studies have found, like the new track and field association report, that static stretching seems to have little benefit in terms of injury prevention, particularly against the overuse injuries common in running. “The findings of this present study are totally in line with the existing literature,” said Malachy McHugh, the director of research at the Nicholas Institute of Sports Medicine and Athletic Trauma and the lead author of a comprehensive new review of decades’ worth of stretching research published in April in the Scandinavian Journal of Medicine and Science in Sports.

But many people remain fiercely attached to their stretching routines. “It was really hard to recruit runners” who, used to stretching, would agree to be randomly assigned to the nonstretching group, said Alan Roth, a former board member of USA Track and Field and coordinator of the study. Once they understood that they might be required to not stretch for three months, they declined to participate. It took the researchers more than two years to coax enough runners to join and complete the study, generating enough data for meaningful results.

And the results are “meaningful,” according to Dr. Dan Pereles, an orthopedic surgeon in the Washington area who originated and led the study. “I had gone into this thinking that stretching would prevent injuries. I was fairly sure of it. But that’s not what we found.” Instead, static stretching provided no particular benefit. On the other hand, it didn’t cause harm, either.

One anomalous finding of the USA Track and Field study was that runners who were used to stretching and were assigned to the nonstretching group became injured at a disproportionately high rate. Almost 23 percent of them wound up hurting themselves during the three months. But no experts associated with the study or who have read the results believe that this finding intimates that stretching had been keeping them uninjured in the past. More likely, Dr. McHugh said, they fell victim to a training error, which, he explained, “in reality can mean any abrupt change in training patterns. Your body adapts to its routine, and if that routine is monotonously habitual as with many runners, it doesn’t take much of a change to cause an injury.”

So is the primary takeaway of the USA Track and Field study that, whatever you’re doing now in terms of stretching or not stretching, don’t stop? Possibly, but most physiologists, taking a broader view of the available science, would probably say no. “In all our involvement with elite athletes now, we don’t do this kind of static stretching anymore,” Dr. Tucker said. Instead, the best science suggests that an ideal preworkout routine “consists of a very easy warm-up, followed by a gradual increase in intensity and then dynamic stretching,” he said. Dynamic stretching, or exercises that increase your joints’ range of motion via constant movement, does not seem to invoke the inhibitory reflex of static stretching, Dr. Tucker said. When “you stretch through movement, you involve the brain much more, teaching proprioception and control, as well as improving flexibility.”

In practice, dynamic stretching would mean that, instead of leaning over and touching your toes or pushing against a wall to stretch your calves before running, you might raise your leg before you in a marching motion, and then swing it back, in a well-controlled arc, suggested Phil Wharton, a neuromuscular therapist and founder, with his father, Jim, of the Wharton Performance clinic in New York City. Or lift your leg to the side and scissor it in front of you to warm up the hip joint.

But make any such alterations to your routine gradually, with circumspection. If there’s one lesson from the USA Track and Field study, said Dr. Pereles, it is that “sudden changes are probably not a good idea.”

Editors’ Note: An unedited version of this article was inadvertently published earlier.

Correction: September 1, 2010
An earlier version of this post misspelled the surname of Dr. Dan Pereles.