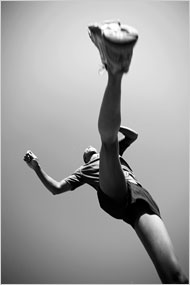 Finnish researchers recently concluded that, if you wish to ward off lung or gastrointestinal cancer, you might want to spend your leisure time jogging instead of picking berries, mushroom gathering or fishing. In the study, published in late July on the Web site of the British Journal of Sports Medicine, scientists studied the health of a group of 2,560 middle-aged Finns over the course of about 17 years. The subjects, all men living in eastern Finland, kept diaries of their daily activities for a year and then went about them.

At the start of the study, none had cancer. By the end, 181 had died of the disease. Parsing the men’s activity levels, the researchers determined that, after controlling for cigarette smoking, fiber and fat intake, age, and other variables, the most physically active men were the least likely to develop cancer, particularly of the gastrointestinal tract or the lung. Even more striking, the intensity of the exercise was key. The more arduous it was, the more protective it proved. Jogging was the most strenuous activity studied, fishing among the least. The men who jogged or otherwise exercised fairly intensely for at least 30 minutes a day had “a 50 percent reduction in the risk of dying prematurely from cancer,” says Sudhir Kurl, medical director of the School of Public Health and Clinical Nutrition at the University of Kuopio in Finland and one of the study’s authors.

It seems fair and just that conscientiously working out should confer disease-fighting benefits, especially against cancer, and an accreting body of research suggests that under certain conditions and against certain forms of cancer, fitness may be remarkably protective. A major review article published in February on the Web site of the British Journal of Cancer synthesized the results of more than two decades’ worth of studies and concluded that the most active people are 24 percent less likely to develop colon cancer than sedentary people are, regardless of their diets, smoking habits or body weight. Another study, this one presented in May at the annual meeting of the American College of Sports Medicine reported that women over age 30 who defined themselves as “highly competitive” by disposition and who exercised more than the average for the group had much less risk of developing breast cancer than women who worked out for less than 60 minutes per week.

What these recent studies, including the one from Finland, share is the suggestion that, in order to use exercise to reduce the risk of cancer, you must make yourself sweat. In the Finnish study, the most beneficial exercise was both frequent and demanding. The researchers used METs (an acronym for metabolic equivalent of task, a numerical comparison of the oxygen or energy used during an activity versus the amount used at rest) to characterize their subjects’ exercise habits. A MET of 1 is the equivalent of lolling inertly on the couch. In his study, jogging steadily for 30 minutes or so represented a MET of about 10. The men whose METs reached at least 5 almost every day were the least likely to die of cancer, especially of the lung or the gastrointestinal tract. Similarly, in one of the studies included in the colon cancer review, women who walked briskly for five to six hours a week were much less likely to develop colon cancer than those who strolled for 30 minutes per week. And in the bogglingly comprehensive 2008 national Physical Activity Guidelines Advisory Committee report prepared for the secretary of health and human services, which includes a chapter about exercise and cancer, the authors concluded that when it comes to breast cancer, “one hour per day of moderate or vigorous activity produces greater reduction in risk” than the two and a half hours of moderate exercise per week that are currently recommended by the surgeon general.

The Finnish researchers admit that, like other scientists studying activity and cancer, they don’t know just how or why brisk exercise affects risk or why only some types of cancer are affected. Exercise long has been known to speed the emptying of the colon, which may reduce the amount of time that carcinogens linger in the organ, the Finnish scientists point out. Strenuous exercise also affects the production of sex hormones in men and women, and — particularly in the case of estrogen and breast cancer — may by that mechanism reduce cancer formation. Other scientists have posited that the panting involved in strenuous exercise might rapidly move carcinogens out of the lungs. Still other researchers have written that alterations in how a well-trained body handles insulin and some cellular growth factors could lessen the chances of tumors developing.

But it remains difficult to tease out the specific molecular effects of regular, brisk exercise from the generally healthy habits of exercisers. Although the Finnish study controlled for diet, the scientists write that other, unspecified “lifestyle factors” and the luck (good and bad) of genetics may well have affected their results. Still, their findings offer a prescription for potentially reducing your risk of certain cancers that has few obvious, undesirable side effects, except among the intractably lazy. “At least moderately intense physical activity is more beneficial than low intensity physical activity in the prevention of cancer,” the authors conclude. The takeaway, in other words, is that jogging trumps berry picking.