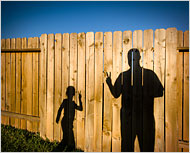 When it comes to raising children, most of the focus is on mothers. But a growing body of research shows that fathers play an essential, if often undervalued, role in a child’s development, as Laurie Tarkan explores in today’s Science Times. She writes:

Uninvolved fathers have long been accused of lacking motivation. But research shows that many societal obstacles conspire against them. Even as more fathers are changing diapers, dropping the children off at school and coaching soccer, they are often pushed aside in ways large and small.

“The walls in family resource centers are pink, there are women’s magazines in the waiting room, the mother’s name is on the files, and the home visitor asks for the mother if the father answers the door,” said Philip A. Cowan, an emeritus professor of psychology at the University of California, Berkeley, who along with his wife, Carolyn Pape Cowan, has conducted decades of research on families. “It’s like fathers are not there.”

To learn more about the importance of fathers, read the full story, “Fathers Gain Respect From Experts (and Mothers) ,” and then please join the discussion below.