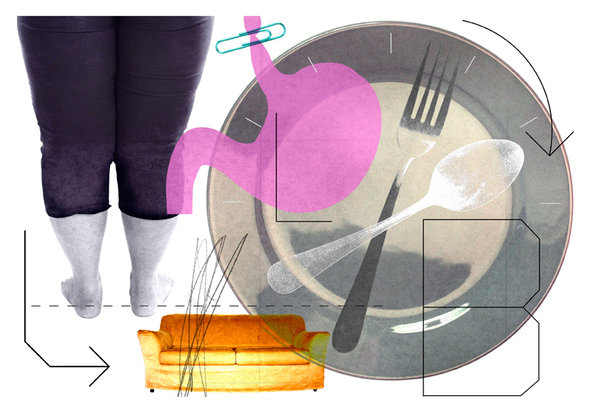 Should parents talk to an overweight child about weight? Or should they just keep their mouths shut?

Parents in this situation are understandably torn. Say something, and they risk shaming a child or worse, triggering an eating disorder. Say nothing, and they worry they’re missing an opportunity to help their child with what could become a serious long-term health problem.

The study, published in the journal Eating & Weight Disorders, is one of many finding that parents’ careless — though usually well-meaning — comments about a child’s weight are often predictors of unhealthy dieting behaviors, binge eating and other eating disorders, and may inadvertently reinforce negative stereotypes about weight that children internalize. A parent’s comments on a daughter’s weight can have repercussions for years afterward, contributing to a young woman’s chronic dissatisfaction with her body – even if she is not overweight.

“Parents who have a child who’s identified as having obesity may be worried, but the way those concerns are discussed and communicated can be really damaging,” said Rebecca Puhl, deputy director of the Rudd Center for Food Policy and Obesity at the University of Connecticut. “The longitudinal research shows it can have a lasting impact.”

The impact on girls may be especially destructive, she said, because “girls are exposed to so many messages about thinness and body weight, and oftentimes women’s value is closely linked to their appearance. If parents don’t challenge those messages, they can be internalized.”

The new study included over 500 women in their 20s and early 30s who were asked questions about their body image and also asked to recall how often their parents commented about their weight. Whether the young women were overweight or not, those who recalled parents’ comments were much more likely to think they needed to lose 10 or 20 pounds, even when they weren’t overweight.

The study’s lead author, Dr. Brian Wansink, a professor and the director of Cornell University’s Food and Brand Lab, characterized the parents’ critical comments as having a “scarring influence.”

“We asked the women to recall how frequently parents commented, but the telling thing was that if they recalled it happening at all, it had as bad an influence as if it happened all the time,” said Dr. Wansink, author of the book “Slim by Design.” “A few comments were the same as commenting all the time. It seems to make a profound impression.”

Some studies have actually linked parents’ critical comments to an increased risk of obesity. One large government-funded study that followed thousands of 10-year-old girls found that, at the start of the study, nearly 60 percent of the girls said someone — a parent, sibling, teacher or peer – had told them they were “too fat.” By age 19, those who had been labeled “too fat” were more likely to be obese, regardless of whether they were heavy at age 10 or not.

Several studies have found that when parents encourage overweight teenagers to diet, the teenagers are at higher risk of lower self-esteem and depression and of being overweight five years later.

Research by Dianne Neumark-Sztainer, a professor at the University of Minnesota, found that when parents talked to their teens about losing weight, teenagers were more likely to diet, use unhealthy weight-control behaviors and binge eat. Those behaviors are less likely to develop when conversations with parents focused on healthy eating behaviors, rather than weight per se.

Harsh comments about weight can send the message that parents are “tying weight to some kind of perception about how the child is valued,” Dr. Puhl said, and that can trigger negative feelings. “The children are internalizing that, and thinking they’re not O.K. as a person. And that is what’s leading to other outcomes, like disordered eating.”

So what’s a parent to do? Do they just stand by while their child gains weight?

Dr. Neumark-Sztainer was besieged by parents asking her this question, and wondering, “How do I prevent them from getting overweight and still feel good about themselves?”

In her book, called “I’m, Like, SO Fat: Helping Your Teen Make Health Choices About Eating and Exercise in a Weight-Obsessed World,” she notes that parents can influence a child’s eating habits without talking about them. “I try to promote the idea of talking less and doing more — doing more to make your home a place where it’s easy to make healthy eating and physical activity choices, and talking less about weight.”

For parents, that means keeping healthy food in the house and not buying soda. It means sitting down to enjoy family dinners together, and also setting an example by being physically active and rallying the family to go for walks or bike rides together. Modeling also means not carping about your own weight. “Those actions speak louder than words,” Dr. Puhl said.

While your children are young, “there doesn’t need to be a conversation at all – it really is just about what’s being done at home,” Dr. Neumark-Sztainer said.

If an older child is overweight, “wait for your child to bring it up, and be there to support them when they do,” she said. “Say, ‘Look, I love you no matter what size you are, but if you would like, I will support you. I suggest we focus not so much on your weight but on your eating patterns and behaviors. What would be helpful for you?’”