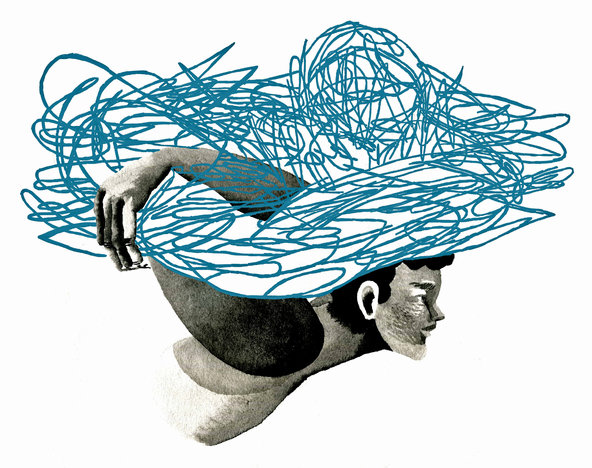 I have slogged through a number of difficult situations in recent months, among them the ongoing crises of my elderly parents’ illnesses and the suicide of a friend. I never lost my appetite nor burst into tears, and I didn’t suffer from any of the other typical symptoms of depression. Maybe I was more irritable than usual, a bit more prone to snap. And yes, I buried myself in my work. But I didn’t think I’d tripped down into the rabbit hole of depression.

You would think I would have been more self-aware, both personally and professionally. As a health journalist, I have often used my own stories to write about difficult-to-discuss medical conditions, includinglearning I had testicular cancer at age 26 and my misdiagnosis with H.I.V./AIDS — back when it was a death sentence. But I had never written about suffering from depression, even though it’s plagued me since I first put pen to paper, at age 11, when I started keeping a diary.

Still, I’m far from alone. At least six million men in the United States suffer from depression, according to the National Institute of Mental Health. The true number is likely to be even higher, said Dr. Matthew Rudorfer, the institute’s associate director for treatment research, since men are less likely than women to report classic symptoms like low mood, sadness or crying, so they often go undiagnosed. Men, he told me, more often demonstrate “externalizing” symptoms like irritability, anger and aggressiveness, substance and alcohol abuse, risk-taking behaviors and “workaholism.”

Oh, that macho thing: Men don’t get depressed; they just work, drink and compete harder. Andrew Solomon, author of the pathbreaking memoir about depression, “Noonday Demon,” told me that ridiculous attitude is part of the mind-set that guys should “cover up our moods with militarism or athleticism.”

So why speak up now? If there was a specific catalyst, it would be the death of my friend (his family asked me not to disclose his real name), a personal trainer who, one August morning, worked out his regular clients — and then went home and killed himself with a single gunshot to the head.

Even with 20/20 hindsight I never would have guessed he was at risk for serious depression, let alone suicide. Just three days before his death, alive with excitement, he’d talked with me about buying his first house and applying for a management role at the health club. Still, as one of his closer friends told me later, “You never know where depression lives.”

Most people, even those who know me well, don’t see my depression. I’m a “high-functioning” depressive, for sure, and perhaps an artful one, too, obscuring its symptoms with a mix of medication, talk therapy, exercise and knowing when to close the door on the world. And unlike my surgical scars (thank you, cancer), those left by depression are invisible.

I wonder, had I talked with my friend about my own struggle, if he might have said, “Me, too.” Indulging in some magical thinking, I imagine he would be alive today if we had shared our stories.

It’s encouraging that new studies are refuting previous ones that showed women to be twice as likely as men to experience depression. For example, a 2013 University of Michigan study concluded, “when alternative and traditional symptoms are combined, sex disparities in the prevalence of depression are eliminated.” In other words, men and women may be equally at risk.

The first step in recognizing depression in men is diagnosing it properly, which means establishing accurate criteria — and making sure mental health practitioners know what to look for. The second step, which may be even more difficult, is getting men to speak up about it.

Which leads back to my own silence. One reason I’ve been unable to talk about my condition until now is that, as the Cymbalta ad says, “depression hurts.” When I first heard that tagline I rolled my eyes, but I’ve since come to appreciate the copywriter’s genius. Imagine suffering from a bad flu, the kind that seems to have poisoned your blood, physically incapacitating you. For me, depression can feel like the worst flu ever, with no end in sight. It is tough to talk about when you’re in that much pain.

And then there’s the stigma. As much as I understand that illness is illness, whether mental or physical, and that there is a greater openness about depression now than a generation ago, I feel shame.

My own encounters with stigma have been profound. I once dated a fellow who dumped me unceremoniously when he found out I took Lexapro, an antidepressant. Before the Affordable Care Act became law, I was rejected for health insurance — not because of my cancer history, but because of my medication history. Having sought help, I was penalized. “It doesn’t make any sense,” my primary care doctor said to me.

So I have decided to be more truthful. Last fall, when I needed to beg off from a commitment, I didn’t fabricate some physical ailment, as I had in the past. Instead, I emailed: “The depression I’m suffering from right now makes it difficult for me to be there as promised. I’m sorry.”

Depression need not be the loneliest fight, as Mr. Solomon has so well characterized it. But if I don’t tell you, you can never really know me — or help. Now I can appreciate it when friends ask me how I’m feeling (but not in that dreadful way: “How. Are. You?”). And I appreciate those who offer: “Is there anything I can do?”