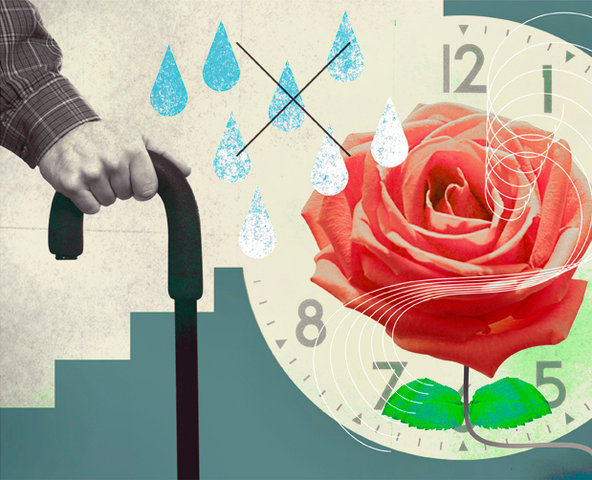 He crossed the marbled lobby of his building, headed for the front door, leaning into his blue walker as if he were facing a gale-force wind. A golden starburst of drying urine ringed the front of his khaki pants. I thought we were meeting in his apartment, but one of us had the time wrong.

As a hospice volunteer for his late wife, I had traveled from my home in Brooklyn to the Upper West Side every Sunday for the last four years to spend time with them, adding more visits when they needed help with household tasks. When she died, I could hardly abandon him. We had, over the course of all our time together, become a kind of family.

Widowers are endangered beings, challenged by grief and its grim companions: loneliness, disorientation and a statistically high mortality rate. A 2012 study by a team at Rochester Institute of Technology showed that widowers are 30 percent more likely to die after the recent death of a spouse, compared to normal risks of mortality. The first six months after widowhood are the most challenging, but the effects of grief can last up to a decade.

At 90, the man I come to visit every week has a host of complicating ailments: He lives with a colostomy bag; his feet are permanently swollen and flaky with gout; he was given a diagnosis of prostate cancer more than a decade ago. It’s a slow growing cancer, and while he had treatment for it, he suspects that some of his current urination problems are a result. These health factors would be challenging enough on their own, but now they are compounded by profound grief.

It had been only eight weeks since he and I had watched his wife take her last breath on the sofa in their apartment upstairs. Her companionship — they had been married for 53 years — had long dictated his daily schedule; for years her illness required him to carry on with the duties of the household. With his wife gone, his routine gave way to a morass of unaccountability and unwelcome quiet.

It would be easy to be rebuffed by his stoical insistence that he’s fine, but his family and I have begun to track his emotional and physical wellness in a number of ways in the hope that we can forestall the typical effects of new widowhood. Which is why, as he and I stood in the lobby, I anxiously checked the time on my watch, vigilant for any indication that he was encountering psychological or physical difficulties.

He seemed a little confused about what day it was. Yet his thin white hair was neat; his sneakered steps deliberate and sure. His eyesight has been quickly fading over the past few years, but he continues to watch TV, and he is in charge of his hygiene and his schedule for all but four hours a day when his aide comes to cook his evening meal. Despite his soiled clothes, he seemed to be managing his activities of daily living (what gerontologists call A.D.L.s) successfully.

Social isolation is a risk many widowers face, compounded by solitary living. A Pew Research study reported in February showed that an increased number of men live alone: 18 percent, up from 15 percent in 1990. According to AARP, 90 percent of those over 65 wish to stay at home as long as possible.

Although his daughters call and visit frequently, they both live far away. Most of his friends are long dead and he is not a member of a synagogue or senior center, organizations that can often provide continuity and support to elder widowers. My weekly visits, and those of his niece and others, are important to ensure that he socializes.

Mobility can also be an inhibiting factor to maintaining social ties and physical health. Although he is still able to take the bus to doctors’ appointments across town, he tires easily. Some taxis can’t accommodate his walker, and his swollen feet and fading eyesight put him at risk for falling. The National Council on Aging notes that falls are the leading cause of fatal and nonfatal hospital admissions among the elderly. A misplaced step could lead to depression, feelings of helplessness and increased isolation during recovery. Still, it’s important to him that he remain independent as long as possible, which means he’s learning to balance mobility with safety.

Unlike many of his peers, my friend owns his home and has adequate finances to last until the end of his life, even if he increases the visiting hours of his home health aide. But in New York City alone, 20 percent of those over 65 live below the poverty line. Because the federal poverty rate is so low — $11,770 a year for a single person — many elderly people don’t qualify for the benefits they need, particularly in urban areas where housing and insurance rates can be higher.

According to a recent study by the University of California, Los Angeles’s Center for Health Policy Research, an increased number of senior citizens in California are experiencing “worse health, more depression and less access to care.” Because widowhood can decrease household income and other resources, those who have recently lost a spouse are particularly susceptible to this trend.

He will turn 91 this month. His older daughter is coming up from Virginia to host a party in his honor. I’ll pick up a cake, ordered by his younger daughter in Colorado, from his favorite bakery on the Upper East Side. We’ll drink champagne to toast his health, and we’ll miss his wife on this first birthday without her.

Marking family and personal occasions in this way has become increasingly important to all of us; these events intersect long, quiet weeks with laughter and company. And here’s the often unacknowledged benefit to keeping watch on a widower: With my grandparents dead and my friends all around my age, he diversifies my social life as much as I do his. He gives me a perspective on the city we live in that my peers simply don’t have. We spend our time together talking about our dissimilar lives and the things that matter to us, reminiscing about his many rich years, and looking up old poems in the vast library that lines the walls of his house. He is my friend and I miss him when I am away. As it turns out, nonagenarians are good company.

Ann Neumann is a visiting scholar at the Center for Religion and Media at New York University and the author of “The Good Death: An Exploration of Dying in America.”