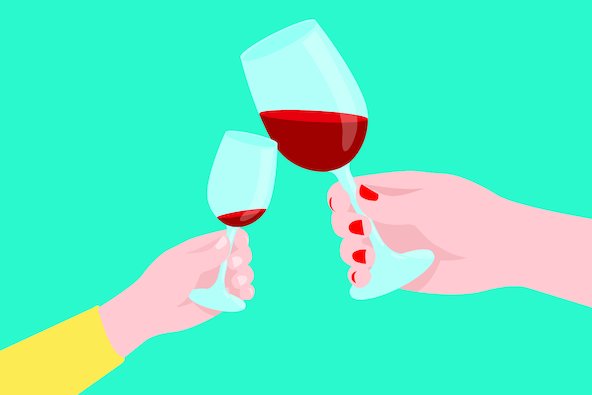 I discovered a new category for myself as a parent when I read a study published in March in the journal Pediatrics called “Parents Who Supply Sips of Alcohol in Early Adolescence: A Prospective Study of Risk Factors.” I confess I bridled a bit at the idea that the investigators might mean me: A ceremonial drop of Champagne on New Year’s Eve? A token “sip” of wine at Passover? Doesn’t this sound a little, well, puritanical?

It turns out that there is a growing body of research, much of it in specialized journals on alcohol use, on parents’ providing small tastes of alcohol to relatively young children in the context of family events, and trying to tease out what it does or doesn’t mean in terms of children’s later relationship with alcohol. Mind you, the sipping children aren’t high school students; we’re reaching back earlier than that. And the research came about because it is so common for parents to offer those sips at home, before children have had other tastes of alcohol.

“The whole issue of sipping came as a surprise,” said Dr. Monika Wadolowski, an epidemiologist who is a postdoctoral research fellow at the University of New South Wales Australia and the lead author on the study, which looked at 1,729 Australian seventh graders. She was drawn to the topic, she said, because some statistics were identifying high rates of early alcohol use in adolescents, but they weren’t distinguishing between the kids who had “sipped” and the kids who had had whole drinks.

Some researchers are trying to get at a child’s very first experience with drinking, “the earliest transition in the youngest population, specifically, from abstention into sipping or tasting alcohol among children,” according to a study published in 2014 in the journal Alcoholism: Clinical and Experimental Research. And that can mean going back pretty early. Researchers looked at 452 children in Pennsylvania to see what factors might predict which ones would start tasting alcohol from ages 10 to 12. Sipping wasn’t associated with the kinds of behavior problems that have predicted problem drinking in other studies. Instead, it was connected to whether parents approved of the sipping and to children’s perceptions of those attitudes.

The lead author, John E. Donovan, a professor of psychiatry at the University of Pittsburgh, recently wrote to me in an email that based on the cumulative research: “Child sipping is related to earlier initiation of drinking, which is a risk factor for a lot of other problem behaviors,” and related to binge drinking and drug use. His conclusion: “Parents should not be providing alcohol to their kids.”

That connection between early sipping and more serious drinking was explored in 2015 study, again published in a specialized journal, the Journal of Studies on Alcohol and Drugs, which followed a group of children from the beginning of sixth grade to the beginning of ninth grade to look at whether early sipping behavior was associated with patterns of early alcohol use. They excluded alcohol in the context of religious services. The children who had tried alcohol before sixth grade — mostly at home, mostly beer and wine, mostly given by a parent — were more likely to have had full drinks or gotten drunk by the beginning of ninth grade.

The researchers controlled for a variety of risk factors, including child behavior problems, parents with a history of alcoholism, and parental drinking. Even so, they found that early sipping was strongly associated with more serious alcohol use by ninth grade.

What does that early sipping do, the researchers wondered. Does it change a child’s sense of what is normal behavior? Of how available alcohol is or should be? Is it possible that the taste — or the effects — of even small sips of alcohol may reinforce drinking behavior in young children?

Parents may think that by providing sips of alcohol to children, we are actually protecting them against problem drinking. We may think that we are modeling — at family occasions or on religious holidays — a healthy, festive attitude toward alcohol, consumed in moderation and in celebration. As a mother who supplied occasional sips, I want to ask about parental motivation, cultural patterns, community context, and about conversations between parents and children.

In Dr. Wadolowski’s study, the most powerful association was that parents who perceived that their child’s peers were using drugs or alcohol were more likely to be providing those sips at home; there were also associations with increased home access to alcohol and lenient rules about alcohol.

“What was really interesting,” she said, “was to find the parents who were supplying alcohol to their children, they had good parenting practices, they had strict rules, they monitored their children’s relationships.” What correlated with their decision to offer those sips? “The biggest predictors were whether they thought their children’s friends were drinking,” she said. So perhaps they were deliberately trying to offer an alternative model.

Dr. Wadolowski is concluding another study that looked at how the seventh graders who had had sips of alcohol behaved over the next year. It found that those who progressed to drinking whole drinks were more likely to have problem behaviors, friends who drank, and less parental monitoring; these factors were more important than the history of sipping. And the risk factors are interrelated.

Because it is so widespread, “we really do need to understand what the long-term effects are and whether it really does relate to binge drinking,” Dr. Wadolowski told me. “The research is so young.”

And so, of course, are the children.