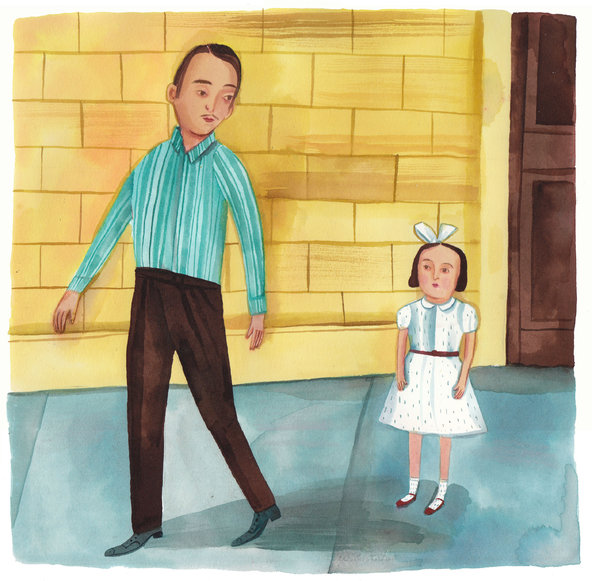 My friend’s father died at the age of 91. I hugged her, offering tears and sympathy, but I was jealous. I was 4 years old when my father first vanished from my life.

We were living in a moshav, a cooperative farming commune in Israel. In the early 1960s, the Israeli government had been recruiting South American Jews — sponsoring families to populate the state. My parents, with four kids under 10, had moved there with friends from Argentina, our native country. An Israeli agency paid for our passage and our little ramshackle farmhouse; once our produce was profitable, we’d pay them back. In Argentina, we were living hand-to-mouth. Perhaps the land of milk and honey would provide. But after a few years of attempting to farm in a desert, my parents and their posse decided to return to Buenos Aires.

It was shortly after we boarded the ship to South America that I noticed my father’s absence. “Your father will join us at home — soon,” my mother said, and left the details to my imagination. Weeks, then months went by. Eventually I almost forgot I had a father.

What I didn’t know until decades later was that my family had left Israel under murky circumstances; we were running away from our debt to the government. The story was that we were just going to visit our relatives in Buenos Aires. If my father had come with us, things would have looked suspect. Instead, penniless, he embarked on the next ship to Argentina a week later — as a stowaway.

I like to think of him back then as a rebel with a heart of gold, fleeing the law to join the family he adored.

The plan failed miserably. After the ship set sail he was caught and promptly booted at the first port in Italy. It would take months of working odd jobs until he could save up enough money to buy a passage to Argentina. How my destitute mother managed to house and feed us in the meantime remains a puzzle I’d rather not solve. Then one day, my father suddenly reappeared. I realized our life had been in suspended animation while he was gone. I had a freshly shaved cheek to kiss each morning, and a sturdy lap to climb onto in the evenings.

But our reunion was short-lived. I was 6 when he went missing again. I’d come home from kindergarten one day — and he was gone. My mother, notoriously tight-lipped about difficult, life-altering matters that concerned us, simply said, “We will join him in the United States — soon.” The words “United States” were as ambiguous to me as the word “soon.” We were going somewhere; again. That’s all I knew.

My father had left for America to find a job and a place for us to live. My parents’ friends, the nomadic posse from Israel, were already settled there and would help him. Even so, it would take a long time to save enough money for five airplane tickets. Six months in all; an eternity to a child. My mother would periodically snap black-and-white photos of us, to mail to my father overseas.

One day we were city kids in urban Buenos Aires, the next we were plucking peppers for harvest on a desert farm in Israel. One day I went to school where everyone spoke Spanish, the next we were going through customs at J.F.K. International Airport, where a group of people — the posse — was waiting for us along with a willowy, handsome stranger who looked familiar. I was sick all over my clean dress just as our plane was landing, and I remember worrying that the stench would be his first impression of his youngest daughter. But he swooped me up and held on tight, and I felt a tinge of recognition.

My father had landed a job at a watchmaking factory in Brooklyn and rented us a small place in Queens. It was literally under the El, on Roosevelt Avenue, so we learned to live with the 24/7 rattle. To make extra money, he set up a workbench in a corner of the house, where every evening after dinner, he soldered watch casings, a filtered Kent cigarette dangling from his mouth. Keeping him company in a haze of smoke: the “Tonight” show with Johnny Carson.

Slowly we established ourselves in America. But I was always uneasy, expecting my father to up and vanish any day. I kept my anxiety to myself. In our house, we didn’t have heart-to-heart talks about our feelings.

But as the years passed, I began to relax, thinking that maybe, just maybe, in the land of opportunity, my father might stick around after all. I found myself understanding his occasional temper flare-ups, and appreciating his otherwise quiet demeanor. I admired his dry sense of humor and sometimes made him laugh – his approval was like winning the lottery. I wished he would work and smoke less.

By the time I was in college, my brother and sisters had moved out and married, and my parents started to enjoy their empty nest status.

One evening, when I was home during my junior year in college, my father came into my room. He was heading to a bar mitzvah in a light blue suit that set off his green eyes. I remember thinking that at 54, he was still dashing, despite the graying hair and heavy, dark bags under his eyes. He looked at me, placed his index finger under one eye and said, “Ojo.” Spanish lingo for “Keep an eye on things.”

That was the last time I saw him. After he danced the night away, not one of the many doctors at the party could get his heart working once it stopped.

He’d done it again, just when I had begun to think he was a pillar of stability. I was caught off guard, as I’d been that day I came home from kindergarten. And yet — through my grief and devastating sorrow — deep inside, of course I knew. I knew he’d leave again. All those years of worrying and waiting and wondering had worked their way into my very being.

I’d been preparing all my life to lose my father.

Claudia Gryvatz Copquin is the author of “The Neighborhoods of Queens” and founder of Word Up: Long Island LitFest.