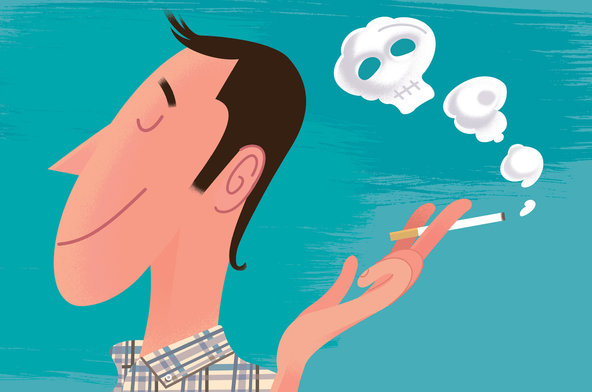 Smokers who think they are escaping the lung-damaging effects of inhaled tobacco smoke may have to think again, according to the findings of two major new studies, one of which the author originally titled “Myth of the Healthy Smoker.”

Chronic obstructive pulmonary disease, or C.O.P.D., may be among the best known dangers of smoking, and current and former smokers can be checked for that with a test called spirometry that measures how much air they can inhale and how much and how quickly they can exhale. Unfortunately, this simple test is often skipped during routine medical checkups of people with a history of smoking. But more important, even when spirometry is done, the new studies prove that the test often fails to detect serious lung abnormalities that cause chronic cough and sputum production and compromise a person’s breathing, energy level, risk of serious infections and quality of life.

“Current or former smokers without airflow obstruction may assume that they are disease-free,” but that’s not necessarily the case, one of the research teams pointed out. These researchers projected that there are 35 million current or former smokers older than 55 in the United States with unrecognized smoking-caused lung disease or impairments. Many, if not most, of these people could get worse with time, even if they have quit smoking. They are also unlikely to be referred for pulmonary rehabilitation, a treatment that can head off encroaching disability.

Perhaps most important, those currently smoking may be inclined to think they’ve dodged the bullet and so can continue to smoke with impunity. Doctors, who are often reluctant to urge patients with symptoms to quit smoking, may be even less likely to recommend smoking cessation to those with normal spirometry results.

Referring to C.O.P.D., one of the researchers, Dr. Elizabeth A. Regan, said, “Smoking is really taking a terrible toll on our society.” Dr. Regan, a clinical researcher at National Jewish Health in Denver, is the lead author of one of the new studies, published last year in JAMA Internal Medicine. “We live happily in the world thinking that only a small percentage of people who smoke get this devastating disease,” she said. “However, the lungs of millions of people in the United States are negatively impacted by smoking, and our methods for identifying their lung disease are relatively insensitive.”

Even when the results of spirometry are normal, Dr. Regan added, “a lot of smokers have respiratory symptoms. They get sick often, are more likely to be hospitalized with bronchitis or pneumonia, and have evidence on CT scans of thickened airway walls or emphysema that impair breathing.”

Dr. Prescott G. Woodruff, lead author of the other study, published May 12 in The New England Journal of Medicine, said in an interview, “Smokers have much more lung disease than we previously thought. The 15 to 20 percent who get C.O.P.D. is a gross underestimate.” Too often, Dr. Regan’s team pointed out, symptoms like shortness of breath and limits on exercise are “dismissed as normal aging.”

The multicenter study headed by Dr. Woodruff, a pulmonologist at the University of California, San Francisco, found that smokers with normal findings on spirometry nonetheless are likely to have chronic respiratory symptoms like cough, phlegm, wheezing, shortness of breath and chest tightness; lower than normal exercise tolerance; and evidence on a CT scan of chronically inflamed airways in the lungs. They also use more antibiotics to control respiratory infections and drugs called glucocorticoids to alleviate breathing difficulty. They pay more visits to doctors and emergency rooms and have more hospital admissions because of a flare-up of respiratory symptoms.

In other words, they are far more prone than nonsmokers to experiencing terrifying episodes of troubled breathing.

Of course, while lung disease is most prevalent, it is hardly the only adverse health effect of smoking, a source of noxious substances that can damage almost every organ system in the body. The list of smoking-related diseases has grown exponentially since smoking was labeled a probable cause of lung cancer 52 years ago in the first Surgeon General’s report on smoking and health. The decades since have added many other deadly cancers, heart disease, stroke, high blood pressure, blood clots, peripheral artery disease, Type 2 diabetes, rheumatoid arthritis, cataracts and macular degeneration, as well as C.O.P.D.

The new findings by the two investigative teams prompted Dr. Leonardo M. Fabbri of the University of Modena and Reggio Emilia in Italy to write an editorial accompanying the New England Journal study titled “Smoking, Not C.O.P.D., as the Disease.” He explained that the results of the two studies “suggest that smoking itself should be considered the disease and should be approached in all its complexity.”

The challenge ahead, Dr. Fabbri wrote, is to identify patients with smoking-related lung damage who do not yet have obstructive disease and devise ways to treat them to reduce their symptoms and prevent flare-ups.

A clinical trial to begin later this year, sponsored by the National Heart, Lung and Blood Institute, will examine whether treatments like use of a bronchodilator will help to alleviate symptoms in those without obstructive disease. Unfortunately, “the cost of bronchodilator medication has gone through the roof,” Dr. Woodruff said. Decades ago, people with breathing problems like asthma used aerosol bronchodilators that included chemicals called fluorocarbons. But these were banned for environmental reasons in the mid-1970s, and the replacements that drug manufacturers came up with are still not available in generic form, keeping prices high.

Dr. Woodruff said that rehabilitative exercise, one of the best treatments for C.O.P.D., should also help people with lung damage short of obstruction because it improves the ability of muscles to use available oxygen more efficiently.

To improve exercise tolerance, patients are encouraged to walk as fast as they can for as long as they can, rest, then walk some more. Most patients find this easiest to do on a treadmill, where speed and incline can be precisely regulated and the results measured. But if such equipment is unavailable or too costly to access, walking indoors or outdoors can be helpful if geared to a specific distance and speed that are gradually increased.

Most critical, of course, is for smokers with or without symptoms of lung disease to quit smoking, which can reduce the severity of respiratory symptoms and slow the decline in lung function, Dr. Regan’s team wrote. However, the team added, quitting smoking “does not eliminate the risk of progressive lung disease,” which means that the lungs of former smokers may need to be examined periodically.