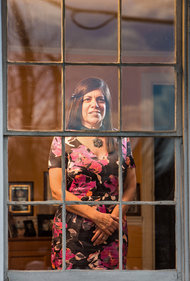 Vivien Foldes is one of a growing number of women with breast cancer who are having a double mastectomy.Credit Uli Seit for The New York Times

Vivien Foldes says she does not regret having her breasts removed five years ago after she was found to have an early-stage cancer.

But there are things Ms. Foldes, a 58-year-old accountant from Woodmere, N.Y., wishes she had known when she chose a double mastectomy, like the fact that the process of reconstruction would drag on for five months and leave her forever unable to sleep on her stomach. Or that it would leave her with no sensation “from the front all the way to the back in the entire bra area,” she said. “Nothing. Zero. Zip.”

Ms. Foldes says there are days that she asks herself, “Should I have done it?” But, she said, her mother had two types of cancer, and she wanted to be proactive: “I didn’t want to be waiting for the other shoe to drop.”

Ms. Foldes is one of a growing number of women opting to have both breasts removed after a diagnosis of breast cancer, even though doctors say the operation does not improve the chances of survival. Now a new study, based on surveys of thousands of women, suggests women who have double mastectomies also do not benefit from a big improvement in quality of life, either. The study was published online in the Journal of Clinical Oncology earlier this month

“Quite a few studies have shown that in patients who don’t have a genetic mutation that increases breast cancer risk, the benefit from removing the healthy breast — purely from a cancer perspective — is zero to tiny at best,” said Dr. E. Shelley Hwang, the chief of breast surgery at Duke Cancer Institute, who led the study.

What she wanted to find out was, “If it doesn’t extend longevity, does it at least improve their quality of life?”

Dr. Hwang concluded that the benefits were marginal. “I don’t want to sound terribly negative; some women had very good results and are happy they made the decision,” she said. But, she added, “You’re not better off, you’re not happier, you don’t feel better about yourself sexually by having the healthy breast removed.”

The number of women opting to remove the cancerous breast and the healthy breast – a procedure known as contralateral prophylactic mastectomy or C.P.M. — has surged in recent years. In 2011, about 11 percent of women who were having a mastectomy for cancer chose C.P.M., compared with less than 2 percent in 1998.

Many breast cancer doctors are concerned by the trend, which they expect to increase. Women with early-stage breast cancer have the same odds of survival whether they have a lumpectomy or a mastectomy, and research suggests the risk of a cancer in the contralateral breast is low. But patients say they want to eliminate even the most negligible risk of a recurrence or cancer in their healthy breast.

“Nine times out of 10, the women are the ones who decide,” Dr. Hwang said. “They have cancer, they never want to deal with it again, they just want both breasts off, and they can’t rest until the other breast is done.”

But Dr. Hwang says she has seen the downside of double mastectomies. Surgical complications can occur during reconstruction, which is often a protracted process, and many women have unrealistic expectations about what the new breasts will look and feel like after reconstruction.

Surgery usually leaves the patient with no sensation in the breast area, and the extensive operations can also result in chronic pain.

“One patient said she couldn’t feel hugs anymore when she snuggled up to her kids,” Dr. Hwang said. “That really affected me.”

Many women are influenced by family history. Valerie Garguilo, 54, of Bellport, N.Y., watched her sister die in 2008 after a seven-year bout with breast cancer that was treated with a lumpectomy followed by two recurrences and two more lumpectomies, and then metastasis to her bones and brain. When Ms. Garguilo was found to have a stage-zero cancer herself four years ago, she opted for a double mastectomy, even though she tested negative for harmful genetic mutations.

“I wanted to do whatever I could to cut my chances of a recurrence; I wasn’t going to keep going in for lumpectomies,” she said.

Some women say they do not believe studies that report no difference in survival rates. “I feel like a lumpectomy can’t possibly get everything out,” said Maria Sawicki, 67, of Massapequa, N.Y., who needed a mastectomy on her affected breast but removed her other breast as well. “The littlest thing can be missed.”

For the study, 3,977 volunteers who had had mastectomies — including 1,598 who had had both breasts removed — completed an extensive survey, called BREAST-Q. The survey measured physical well-being, which asks about neck, arm and upper back pain, mobility and the ability to lift the arms; psychosocial well-being, which focuses on body image and confidence in social settings; sexual well-being, including sexual confidence and feelings of attractiveness and comfort level during sex; and breast satisfaction. The last question asks whether bras and clothes fit well, whether the breasts are symmetrical and whether one is comfortable with one’s appearance, clothed and unclothed.

After adjusting for differences between the groups, the researchers found that women who had had double mastectomies had slightly higher scores on psychosocial well-being and breast satisfaction — the differences were only about a point higher on a scale of 100. But scores on the other domains of physical and sexual well-being did not differ from those of women who did not have double mastectomies.

The most important factor in a woman’s overall well-being, the new study found, was whether she had had reconstructive surgery. Most women who had had such surgery reported substantially higher quality of life scores, whether they had single or double mastectomies.

“That’s a much more powerful intervention to improve quality of life than a contralateral prophylactic mastectomy,” Dr. Hwang said.